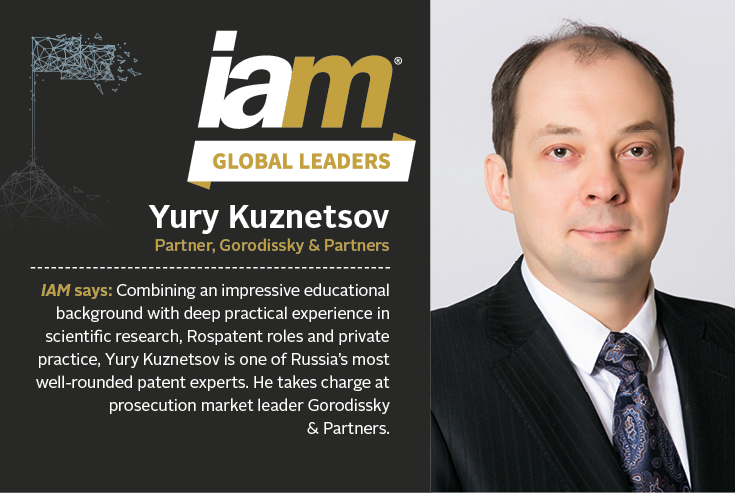 What inspired you to pursue a career in intellectual property?

Interest, mainly. I took up this career in 1992 – when the first Russian Patent Law was enacted. This law introduced patent protection as the only form of invention protection, whereas before that, under the Soviet Union, the main form of invention protection was the so-called ‘inventor’s certificate’ – a document that declared inventorship but bestowed no exclusive rights on the inventor, instead delegating such rights to the Soviet state. At first glance, this appears abusive, but the system worked perfectly well – invention examination was carefully conducted at no cost to the applicant, the rights to inventions belonged to the state and any Soviet enterprise could use the inventions if it paid remuneration to the inventors. The Soviet Committee on Inventions and Discoveries had a department to supervise the process of paying remuneration. Thus, the system was pro-inventor and required no IP-specific practitioners other than state patent examiners. In 1990 when I started working in industry and drafted my first application for an invention carefully and attentively, one of my colleagues said that “there is no need to be so attentive, just write something and we will send it to the Examination Institute and they will write whatever else is needed, that is their job”. When I saw that the system of IP protection in Russia was changing and becoming market oriented, I decided to try it for myself. I started at the Russia Patent and Trademark Office (Rospatent) and then moved into IP practice. Another reason was that I liked a changing environment and was less suited to working on one solution from conception until it was put into practice through lots of design, modelling, experimenting and testing. I could do that and did, of course, but the conception stage attracted me much more than later ones in the lifecycle of technical solutions. Therefore, I finished studying at the Technical University, worked for two years in the R&D industry and went to the newly established Rospatent to begin my IP career.

Who is your IP hero and why?

I admire the efforts and activities of many people who have worked and are currently working in intellectual property. My professional life has connected me with so many bright people that just briefly mentioning each of them would take too many pages. Therefore, I will narrow my selection down to people whose personal input either directly (by creating the foundation of the IP system) or indirectly (by using intellectual property in their business) resulted in developments that we still benefit from today. My IP heroes are Thomas Jefferson, George Westinghouse and Nikola Tesla. Jefferson founded a system that favoured people’s creativity, by rewarding them for this creativity to the benefit of human society as a whole. Westinghouse prioritised corporative interests over his own personal interests and created the model of corporative intellectual property, whereby all employees contribute to jointly owned exclusive rights. Without such a model, no complex industry could survive today. Tesla demonstrated how a person with no resources other than their own creativity can change the world if they are supported by a workable system of IP rights protection.

What does leadership in the IP world look like to you and how can it be developed and nurtured at an individual level?

Leadership in the IP world is a special type of leadership, in which effectiveness can seldom be matched with particular material results. It is a type of leadership where rules cannot be formalised and you must have a high level of intuition, combining technical, legal, business and political awareness. On an individual level, leadership requires you to build on your experience from your own professional life and co-working with other IP professionals. IP practitioners often have to travel for work, which can make it difficult to maintain a personal life, but having a face-to-face one-hour meeting in another hemisphere (which requires a long flight) can be more effective than several weeks of correspondence by mail. In addition, speaking at international conferences can further improve cooperation. However, much of that you understand only after many years of practice.

What are the key issues facing patent owners in Russia currently?

The main issues are quite similar to other jurisdictions. Owners applying for patents for service inventions involving Russian inventors should be more careful and not try to reduce the process of establishing employee-employer relations with regard to inventions and other created IP rights by just signing translated contracts from other jurisdictions. A lack of due care in this matter could jeopardise the granted patent rights.

What level of patent expertise can be expected in the Russian courts?

The Russian courts have a high level of patent expertise. Personally, I see no difference between the way in which Russian judges oversee IP disputes and that of judges in other countries world where IP disputes are not as exotic. The Russian judiciary system deals with substantially less IP disputes compared with China, Germany or the United States. As IP disputes become more common in Russia, the number of competent judges will also need to increase to hear such cases. The complexity of IP disputes will also increase over time, but I am sure that these challenges will be timely and properly addressed by the Russian judiciary branch, which comprises a specialised IP rights court.

If you were to give one piece of advice to patent owners entering the Russian market for the first time what would it be?

Do not underestimate its complexity. It is a special market with its own history, rules and business habits. It is neither a Western nor an Eastern-type of market, so patent owners must be ready to use different approaches to those which they use in Europe or China, as these approaches will be unsuccessful in the Russian courts.

This is quite a difficult question because in recent years there have been many examples that true interest may lie far away from the branches of technology for which high numbers of patent applications are filed, tough legal disputes on the potential patentability are fought or the social impact of futuristic technologies is expected. True interest is in long-term strategies which are developed and implemented by a conglomerate of high-level scientific and engineering resources supported by worldwide teams of IP professionals connected with industries and finances. I feel that we are close to a time when many known industries are revealing their strategical technological aims for the coming decades, and I am sure that some of these strategies will amaze us due to the technologies involved and their distance from the traditional fields of activity of those industries. Among the technologies that I expect to see growth are those incorporating the five basic human senses (ie, sight, hearing, smell, taste and touch) into various devices (eg, medical devices and treatments to lessen human vulnerability to illness, environmental impact and age and new artificial materials with outstanding properties). Patent interest in these areas will not be solely related to drafting applications and battling challenging granted patents and infringements, but will also involve consideration of social policies, ethical and humanitarian aspects and even new legislative approaches. Certainly, these technologies will inevitably change the way in which we design, manufacture, use and provide traditional goods and services.

What are the biggest challenges facing law firm IP practices in Russia currently?

Local businesses are demonstrating a rather low level of general knowledge about intellectual property. IP companies that wish to provide quality services must spend time educating their clients about what intellectual property is and how to understand the true value of IP rights as tools that not only permit something but also bar the use of protected subject matters. Such education naturally takes time, but is absolutely necessary. As I learnt in my first application, many Russian businesses still think that IP rights are something that the government or state will take care of for them – they do not understand that modern legal systems provide effective tools to allow interested parties to obtain and protect IP rights themselves. The absence of in-house IP professionals is the biggest challenge for a law firm working with industrial and R&D businesses.

If you could change one aspect of the current Russian patent regime what would it be?

I would try to make it less juridically formalised. Filing IP applications is not solely for lawyers – it is also for creative people. Thus, the systems should be sufficiently clear, perhaps by sacrificing strict legalese to provide clarity where possible. If I had to choose between legal briefness and redundancy in IP laws and regulations, I would prefer the latter.

How do you expect the Russian patent environment to develop over the coming years?

The Russian patent environment is interesting because of its unpredictability, but this is the main challenge to being an IP professional – you must always be prepared for change. These changes will hopefully be positive. I expect that there will be a substantial increase in activity from local businesses in the IP field, and I can only welcome that.

Yury Kuznetsov represents multinational and Russian clients in prosecution and enforcement of patent rights in the electronics, communications, computer systems and audio and video engineering fields. Mr Kuznetsov has great experience of oppositions and appeals before the Russian and Eurasian patent offices and representing clients in a number of litigation cases. Another important aspect of his practice is IP due diligence and freedom-to-operate analyses, including advice relating to patent infringement.