Who is patenting AI technology?

Some of the most popular movies in the past few decades or so are about AI – Terminator, War Games and The Matrix – and present it as an existential threat to mankind. But the reality is much less dramatic. The term ‘AI’, as it is used in pop culture, in fact refers to ‘artificial general intelligence’ and describes an intelligent system that, much like a human, is able to learn and execute a broad range of tasks. However, the creation of artificial general intelligence that could rival the human brain is still in the very distant future. The term ‘narrow AI’ has thus been coined to define an AI system that carries out one or very few tasks. Such systems are already part of our lives, though we may not be aware of them (eg, the autocorrect function on a phone or speech assistance on a smartphone).

One form of AI has received a lot of media attention – deep learning. Many are fascinated by it because its structure resembles the human brain (eg, it uses multilayered neural networks consisting of single artificial neurons). It sparks the idea of true artificial general intelligence or a copy of the human brain. But how far away are we from achieving that? As a comparison, the human brain consists of over 100 billion neurons. The best supercomputers can barely compute an artificial neural network of 16 million neurons – that is the capacity of a frog’s brain. Although this may not sound impressive, it shows that focusing this capability on a very small task can bring about amazing results.

For example, Google’s DeepMind used this technology to compete with (and beat) humans in board games such as chess and go. Some of the moves of DeepMind’s computer – AlphaGo – were completely new and unheard of, yet succeeded. Its behaviour was very different from classical chess and go computers, which utilise enormous libraries of possible moves and pick the best one. However, the tables are turning. The top (human) go players are analysing the machine’s actions to improve their own strategies and are starting to beat the machine.

In this way, a 2,500-year-old game has made an impressive leap in a short space of time because AI introduced a new way of “thinking”. It gives one hope that these advances are possible in fields such as healthcare, physics and environmental protection. The question is whether these hopes are already reflected in, or justified by, the patent landscape of multilayered neural network and other AI technologies.

In order to identify AI-related patents, the IPlytics Platform database was used to perform an extensive keyword search of worldwide filed patents in the field of AI technologies. The search was based on the patent’s content, making use of state-of-the-art stemming and semantic indexing methods. For this report 448,684 patents that break down into 204,947 patent families (number of unique patents registered on INPADOC) were analysed. Figure 1 illustrates the number of patent applications per year between 2008 and 2019. 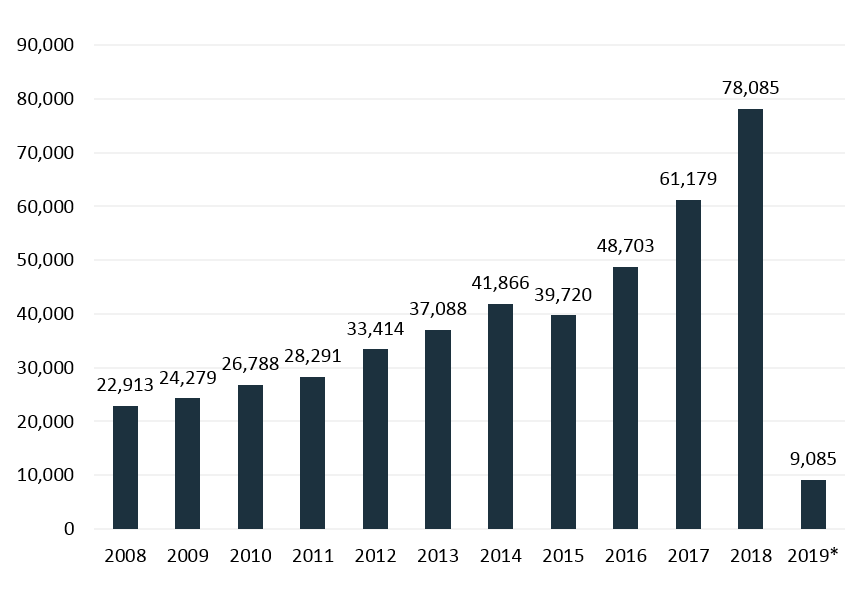 In order to identify patent ownership, IPlytics aggregated patents as to the patent portfolio of each company, making use of entity disambiguation techniques. Further, patent applications were counted as to the corresponding patent family in order to count the number of unique patented inventions per company. Figure 2 shows that IBM, Microsoft and Samsung are the three largest AI-related patent owners. Out of the top 10 AI patent owners, five were US companies, two were Japanese, one was Korean, one German and one Dutch. 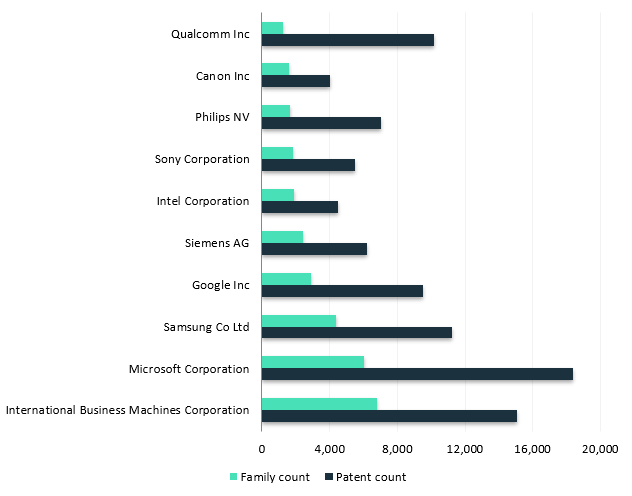 In order to identify at which office patents were filed, AI-related patents were counted as to the office’s country. We took into account the designated states/regions for Patent Cooperation Treaty WIPO applications and European patent applications. As illustrated in Figure 3, most AI patents were filed in the United States, followed by China and the European Union. 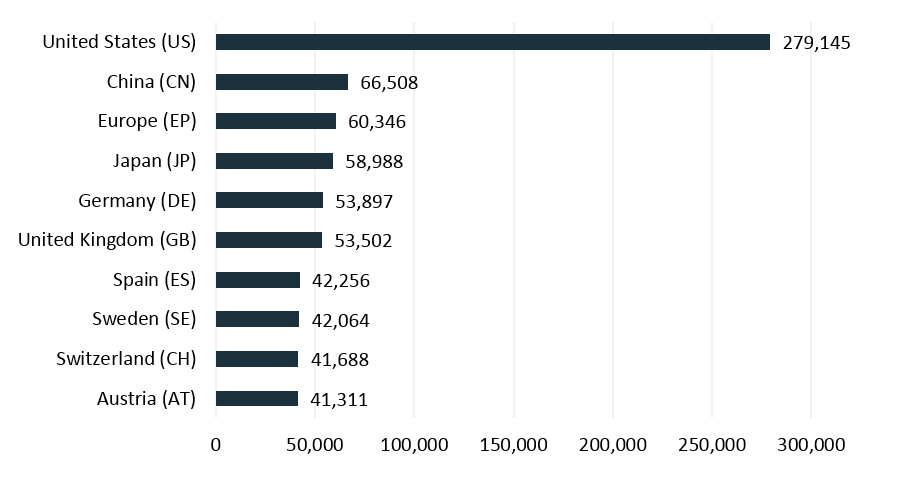 IPlytics made use of statistical patent valuation indicators to analyse the strengths, weaknesses and positioning of patent portfolios. It integrated seven indicators in total. Figure 4 shows two of them.

The market coverage indicator estimates the patent family size by counting each country of a patent family divided by the country’s gross domestic product. The count is normalised and compared to industry averages (using International Patent Classification (IPC) or Cooperative Patent Classification (CPC), year and country). A high market coverage value reflects a global internationalisation strategy and a wide legal market protection. Further, a high market coverage value reflects a high perceived patent value for the applicant. Patent application and patent maintenance fees create considerable costs at each patent office. The more countries in which an invention has been patented, the higher the perceived international market potential for the patented invention.

Table 4 shows that all AI patent portfolios of the top 10 patent owners have extensive international coverage (a score higher than one is above average).

Table 4 shows that only five AI patent portfolios owned by the top 10 patent owners have a high technical relevance (a score higher than one is above average). IBM and Intel having the weakest portfolios in this regard.

IPlytics Platform database was used to identify AI patents subject to litigation in US district courts and subject to a patent trade (reassignment) within the data set of AI-related patents.

Figure 5: Cases of patent litigation in the United States over time 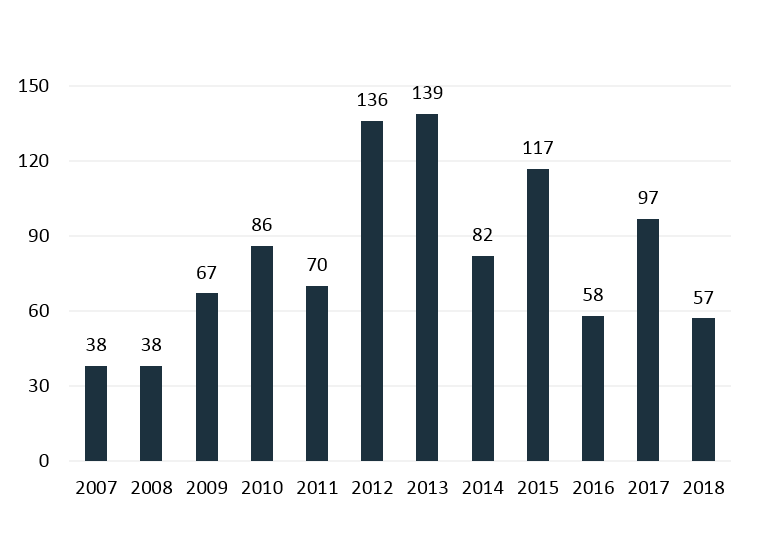 Figure 6: Timing between transfer and litigation 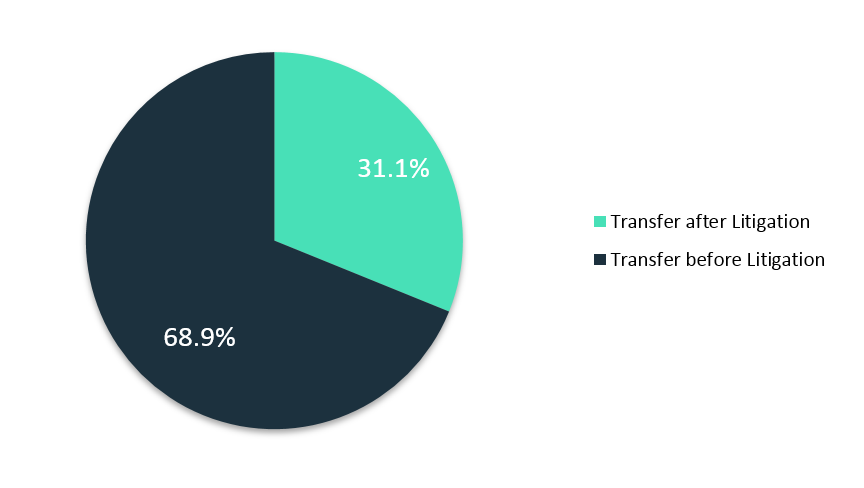 Patenting is increasing sharply for AI technologies. Further, AI patents are increasingly being transferred and litigated. Senior patent managers and patent directors involved in industries where AI has an impact should consider the following: