Many of us will soon experience various types of smart home solution. Whether this be in stores or new apartments, many will experience smart home solutions such as climate control, lighting, beds, TV, kitchen devices and home security. AI-powered user interfaces, including voice, gesture and biometrics, will fuel the growth of smart home use cases in the next few years.The variety of home automation solutions is as broad and complex as the standard requirements for using smart home devices. Such solutions can be linked by sophisticated systems on chip (SoCs), devices, computer networking; and connections are most commonly linked via Bluetooth, WiFi and point-to-point connections. Open connections such as Bluetooth and WLAN are already widespread in use. Long-term evolution (LTE-M) – part of the 5G mobile connection – can so far only be used for small devices (eg, fans, cameras, vacuum cleaners, heaters, refrigerators, washing machines, jalousies and smart lights, among other things). The standard Narrow Band – Internet of Things (NB-IoT) is ideal for devices that generate low-data traffic and have a long lifecycle. The most common smart home protocols that link the different products are ZigBee, Z-Wave, HomeMatic and KNX. The different standards show the variety of solutions between speed and latency.

In order to identify smart home-related patents, the IPlytics platform database was used to perform an extensive keyword search of patents filed worldwide in the smart home technology field. The search was based on the patent’s content (ie, title, abstracts, description and claims), making use of state-of-the-art stemming and semantic indexing methods. As the granting process of patents may take several years, we looked at pending patent applications as well as granted patents. Figure 1 illustrates the number of patents per year of application between 2006 and mid-2020. The numbers overall illustrate increasing filings since 2006.

Figure 1. Smart home patents as to year of application 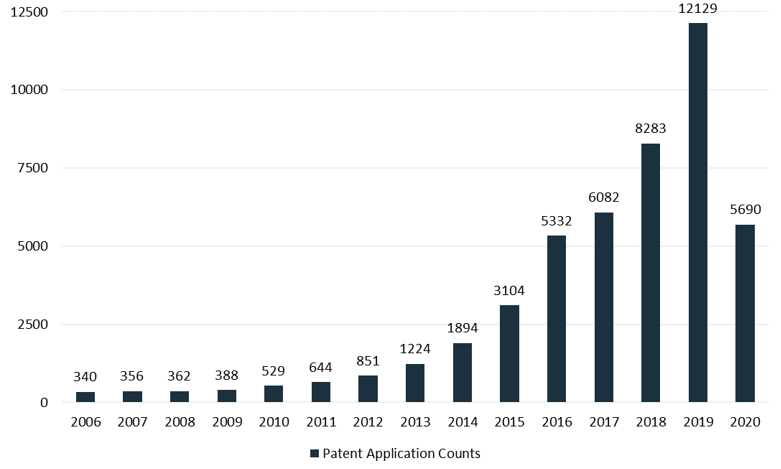 In order to identify patent ownership, IPlytics aggregates the patents with regard to the patent portfolio of each company, making use of entity disambiguation techniques. Further, patents are counted in relation to the corresponding patent family in order to determine the number of unique patented inventions per company. 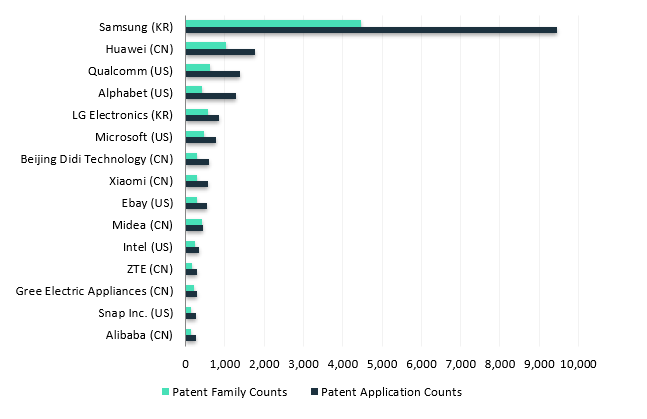 The list of top patent owners includes six US companies and seven Asian companies. Figure 2 reveals that Samsung, Huawei and Qualcomm are the strongest owners of patent applications in the smart home space. Further, South Korea stands out with Samsung as the leading market player and LG Electronics is among the top five companies. There is no European company in the top 15 smart home patent owner list.

The next industrial revolution will increase the convergence of connectivity technology into mechanical products. This shift will heavily rely on standardised and often patented connectivity standards, which are developed in open, consensus-based standard development organisations (SDOs). However open standards such as 4G, 5G, WiFi (802.11), Bluetooth, RFID and NFC are subject to SEPs. If companies want to incorporate their patents in standards, they must allow other companies to license these patents under FRAND terms. The future of smart home technologies will therefore also rely on – at least to a certain extent – implementing patented connectivity standards. The IPlytics worldwide database on declared patents was utilised to search all patent declarations for the most relevant smart home standards protocols (Figures 3 to 5). The first technology analysed was LTE-M, which is part of 5G. Although the technology was not specifically designed for the Internet of Things (loT) or machine-to-machine (M2M) applications, because it uses existing infrastructure, the standard is very easy to implement. Typical devices come from the medium performance range (eg, a small fan) and thus will likely become an important technology for smart home appliances. Figure 3 shows that Nokia, Samsung and ZTE own most of the patents declared for this LTE-M 5G standard. 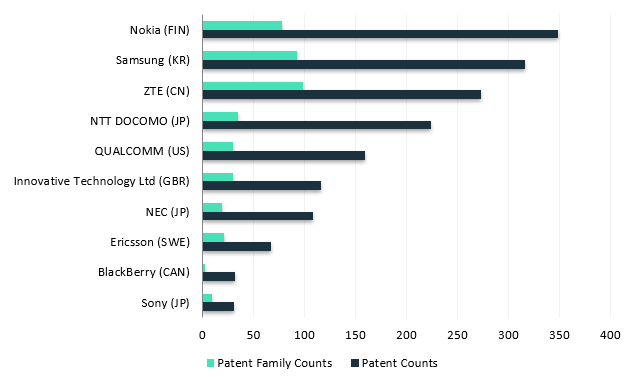 One of the most promising radio standards in the smart home area is the NB-IoT standard. The advantage of this is that it combines extremely low energy consumption with a very high level of security and less interference. Thanks to 3GPP standards, the building penetration is high. With one battery, the modules can be operated for 10 to 20 years. In addition, it can be operated alongside existing 2G and LTE networks, as it requires a bandwidth of 200 kHz only. Figure 4 shows that Qualcomm, Nokia and ZTE own the most declared patents for NB-IoT. 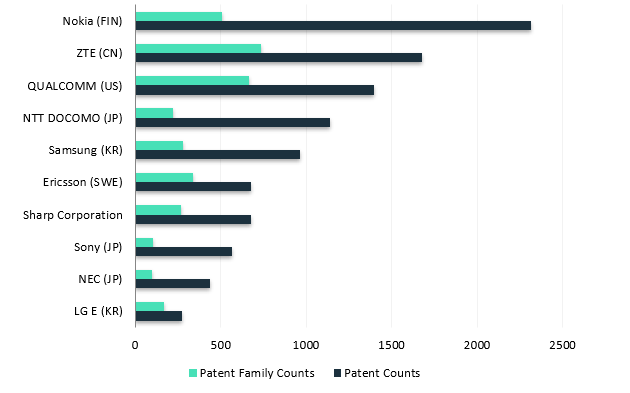 Another wireless standard in home automation is the ZigBee technology standard, which specialises in short ranges of 10 to 100 metres, making it very suitable for home automation. In contrast to Bluetooth connections, for example, a ZigBee network can also be accessed remotely via the Internet. Figure 5 shows that the top patent owners are Qualcomm, Intel and Convida. 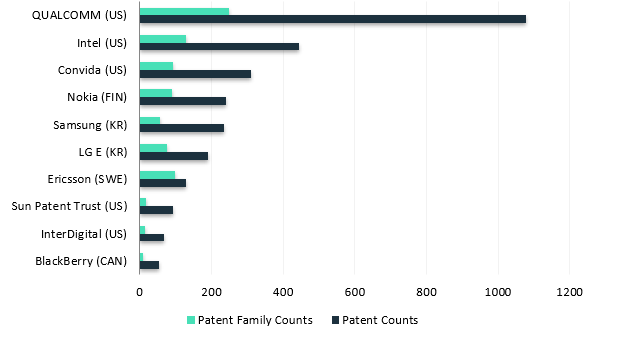 An alternative approach to assessing the strength of technology leadership is to analyse the involvement of companies in standards development. This is based on the assumption that the companies with the greatest influence in standards development will also have the strongest patent portfolios of the future. Most standards organisations (ie, 3GPP, European Telecommunications Standards Institute (ETSI) or the Institute of Electrical and Electronics Engineers(IEEE)) are contribution-based, which means that member companies can submit technical proposals for inclusion in the standard. Standards development is a process where companies send their best engineers to meet in worldwide conferences and working group meetings to present their latest R&D findings. Standards-developing companies submit technical contributions, for example, by introducing new projects or proposing changes to existing projects. These contributions often include patented technologies, which will eventually be included in the next standards release. The number of technology contributions is a measure to identify future technology and patent leaders for the next standard generation. The IPlytics database was used to perform an extensive search in full text technical contribution documents to identify which companies participate in developing standards with regard to smart home applications. Figure 6 shows the top 10 companies that contributed to LTE-M. The result shows that there are four main standards contributors – Ericsson, Huawei, Nokia and Qualcomm. 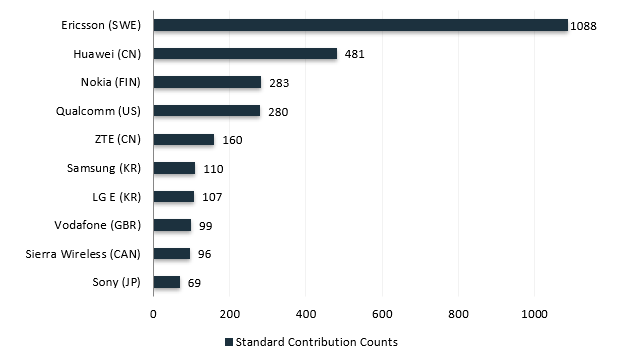 Figure 7 shows the top 10 companies that contributed to NB-IoT. The result shows that there are four main standard contributors – Huawei, Ericsson, Nokia and Qualcomm. 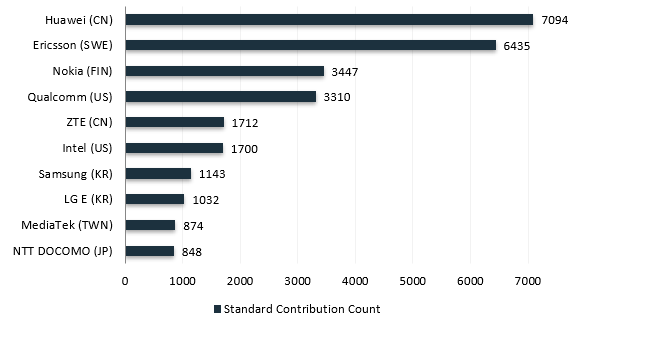 Figure 8 shows the top 10 companies that contributed to ZigBee. The result shows that there are four main standard contributors – Kinney Consulting, Intel, Cisco and Huawei. 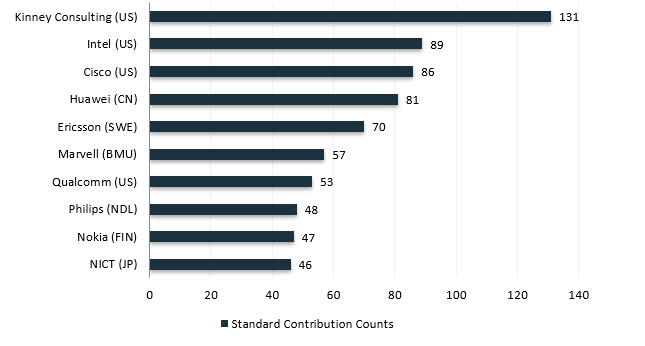 Figure 9 presents the top 10 companies that contributed in the TG1 group of IEEE to the WPAN and Bluetooth standard.

Figure 9. Standards contributions in IEEE TG1 with regard to WPAN and Bluetooth 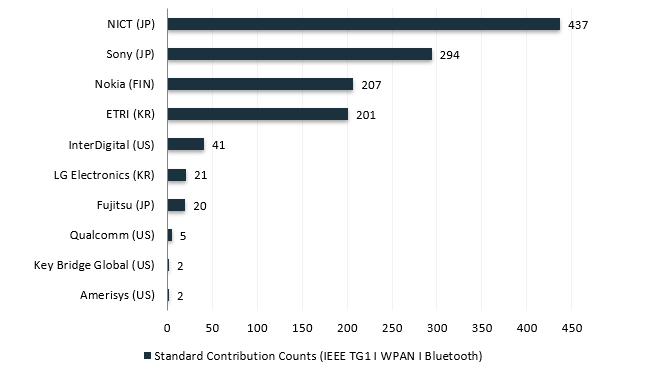 Figure 10 shows the top 10 companies that contributed in the TG3 group of IEEE to the high-rate WPAN standard. 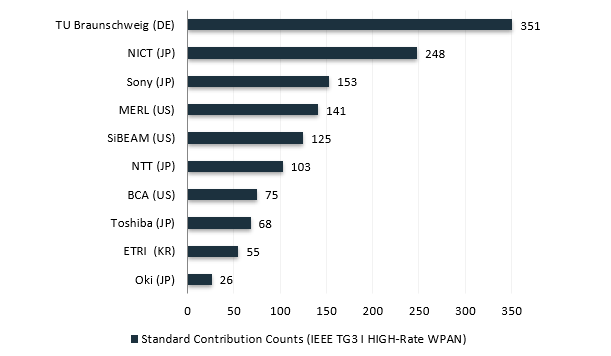 Figure 11 shows the top 10 companies that contributed in the TG3 group of IEEE to the low-rate WPAN standard. 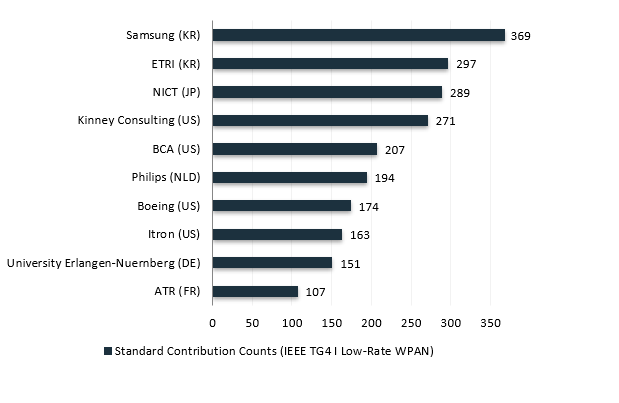 Figures 3 to 11 provide an overview of all technology standards that will likely become relevant for smart home technologies. The top companies that own the relevant patents or have submitted most standards contributions very much depends on the standardised technology. In the years to come it will be interesting to monitor which standards come to dominate connectivity for smart homes. The increase of inventions for smart home tech will lead to new applications and uses cases. Experts believe that 2020 is to become the year with the highest share of smart home applications, with the United States, China and South Korea dominating the market. The development of different standards will enable different applications based on different requirements.

IP professionals in the smart home industry should bear in mind the following:

IP professionals need to be aware that while the market for 5G or WiFi 6 and other connectivity type technologies is fairly new, it is now time to be thinking about what the business will need two, five and 10 years in the future, and hand in hand with that, what the patent portfolio will need to support that. Be proactive, not reactive. Do not get left behind.