Who is leading the WiFi 6 patent race?

The first WiFi 6 devices are now available in stores, with real-time WiFi 6 applications that are capable of functioning reliably in WLAN. WiFi 6 achieves speeds up to one-and-a-half times faster than WiFi 5 – the new standard enables a maximum speed of up to 4.8 gbps per client, while WiFi 5 has a maximum speed of 3.12 gbps. Further, with many end devices connected to WLAN, the new standard ensures a much more reliable network connection as larger data streams can be processed simultaneously and at much longer distances. In addition, the standard offers more predictable performance for advanced applications such as 4K or 8K video transmission, HD applications for collaboration in high-density environments and fully wireless networked office environments. Further, it enables the application of the Internet of Things (IoT) in factories, homes and even cars.

Instead of cryptic abbreviations (eg, 802.11ac, 802.11ax and 802.11n) the WiFi alliance has decided that future WLAN standards will follow a generation label. For example, the new version is simply called WiFi 6 instead of 802.11ax, whereas WiFi 5 is used for its predecessor, 802.11ac. The consortium that develops WiFi – the Institute of Electrical and Electronics Engineers (IEEE) – has even started working on WiFi 7, known as 802.11be. The IEEE ratified WiFi 6 in the second half of 2019 and the WiFi Alliance certified WiFi 6 straight after.

WiFi 6 versus 5G – complements or substitutes?

The end of WiFi is predicted every time that a new mobile phone standard is announced. This was the case with the 3G standard, which was supposed to make WiFi 4 (802.11n) redundant, which did not happen. With 4G (LTE) the whole story was repeated and WiFi 5 (802.11ac) was set to become irrelevant. Again, this was proved incorrect. And now WiFi is predicted to diminish in importance as the 5G standard covers both indoor and outdoor connectivity. But what if it is the other way around and WiFi 6 takes over 5G?

4G and 5G, like all cellular technologies, are based on the use of a licensed radio frequency spectrum (for further information on 5G standards, see https://www.iam-media.com/who-leading-5g-patent-race-0). These signals are broadcast from base stations at high power and can travel for long distances. To connect to those networks, devices require a SIM card (or eSIM). On the other hand, all WiFi networks use so-called unlicensed or shared spectrum. Here, devices do not need a SIM card to connect, just a radio that can send and receive signals at certain frequencies. For a long time, the technologies behind cellular networks and WiFi networks were fairly different. However, as the latest generations of these technologies have developed over the last few years, there has been a great deal of crossover between them. In fact, the performance improvements with WiFi 6 could be great in some situations (eg, sports stadiums, concert halls and potentially some corporate campuses) and some people believe it could be a threat to 5G.

Who is the WiFi 6 technology leader?

First, the IPlytics database was utilised to identify all WiFi-related standard contributions and categorise these with regard to the different standards generations. Standards development is a process where companies send their best engineers to meet in worldwide conferences and working group meetings to present their latest R&D findings. Standards-developing companies submit technical contributions (eg, by introducing new projects or proposing changes to existing projects). These contributions often include patented technologies, which will eventually be included in the next standards release. The number of technology contributions is a measure to identify future technology and patent leaders for the next standard generation. Figure 1 shows the number of WiFi-related contributions as to the generations WiFi 5 (802.11ac), WiFi 6 (802.11ax) as well as WiFi 7 (802.11be). The trend analysis shows that standard development at the IEEE standards consortium follows a generational trend. Here the standard development activities for WiFi 5 decreased in 2011 and stopped in 2014, the year when the work for WiFi 6 picked up. While standards development for WiFi 6 is already decreasing, the new standard generation WiFi 7 began with a sharp increase in standards contributions in 2017. Figure 1 illustrates an increase of contributions from WiFi 5 to WiFi 6 and suggests that the latest technology standard WiFi 6 is technologically more complex than its predecessor.

The IPlytics database was again utilised to analyse standards contribution in order to identify which companies participate in developing standards with regard to WiFi generations. The US-based company Qualcomm has submitted most contributions to all generations from WiFi 5 to WiFi 7, followed by Huawei (China) and Intel (United States). US-based Newracom, Ericsson (Sweden) and the South Korean WILUS Group joined the WiFi 6 standards development. Taiwan-based MediTek as well as South Korean LG have notably increased contributions for WiFi 7 compared to former generations. From the top listed WiFi developing companies every second company is from the United States, which confirms the strong presence of US companies over South Korean, Chinese, Japanese or European companies. 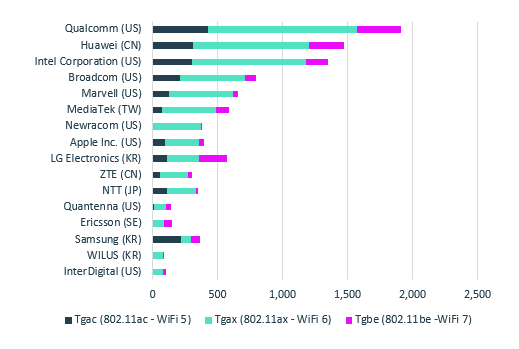 Who is leading the WiFi 6 patent race?

There are two key technologies upgrading WiFi 6 compared to earlier generations – multi-user, multiple input, multiple output (MU-MIMO) and orthogonal frequency division multiple access (OFDMA). MU-MIMO is already used in modern routers and devices, but only as a downlink. The current WiFi 6 generation upgrades MU-MIMO as it will also allow the uplink direction to simultaneously transmit from multiple stations. OFDMA allows transmissions to deliver data to multiple devices at once. In order to identify patents related to these WiFi 6 technologies, the IPlytics platform database was used to perform an extensive keyword search of patents filed worldwide for both MU-MIMO and OFDMA. The search was based on the patent’s content (ie, title, abstracts, description and claims), making use of state-of-the-art stemming and semantic indexing methods. As the granting process of patents may take several years, we looked at pending patent applications as well as granted patents. Figure 3 shows the yearly number of WiFi 6 related patent filings as to Uplink MU-MIMO and OFDMA.

For both technologies the patent filing started in 2014 – exactly when the first WiFi 6 standards contributions were submitted to the IEEE. This correlation is typical for companies that file a patent with the aim to have its claims map onto an element in the final standard version in order to own an SEP. Here, inventors work very closely with standards developers to continuously submit the latest technical advances in contributions to the standards body working groups and report back to internal patent boards any invention worth patenting beforehand. The early filing of provisional applications allows standards developers to protect contributions before they are submitted. These contributions – when approved by the working group – are means to integrate patented inventions into the final standards specification in order to file SEPs. The prosecution process further allows a delay in the grant decision by amending patent claims, therefore aligning claim language to standards’ technical sections. Here, applicants typically keep filings open until there is greater certainty about the outcome of the standardisation process. Once the standards have been adopted by the market, patent holders can set up licensing programmes and approach standards implementors for SEP royalties. Large SEP holders in the communication industry tend to have experienced licensing teams that negotiate cross-licensing deals with standards implementors around the world.

The IPlytics platform was used to aggregate all identified Uplink MU-MIMO patents as well as OFDMA with regard to the patent portfolio of each company, making use of entity disambiguation techniques. Further, patents were counted in relation to the corresponding patent family in order to determine the number of unique patented inventions per company (Figures 4 and 5). 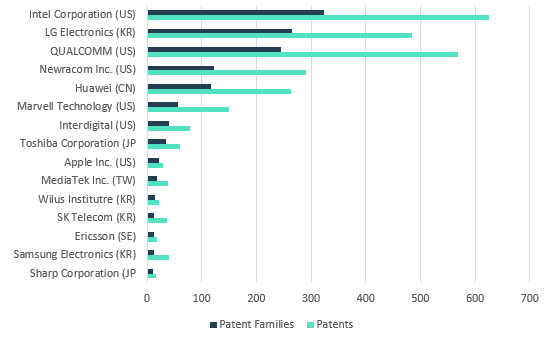 Figures 4 and 5 confirm that Intel and Qualcomm are not only among the companies with most WiFi 6 standards contributions, but they also file most patents related to the most important WiFi 6 technology advancements. The two US companies are followed by LG, Huawei and Newracom. Although patent search analysis does not identify whether these patents are essential to the WiFi 6 802.11ax specification, the results provide a good overview of the main players in the market for WiFi 6 technologies.

Figure 5. 802.11ax related patent filings for OFDMA as to company 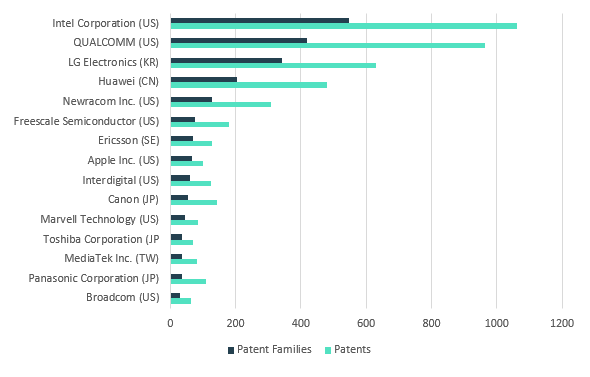 Although the 5G standard dominates the news, future connectivity will highly depend on wireless WiFi technologies.

Licensing SEPs looks set to become a major challenge across all industries subject to connectivity. WiFi 6 will become one of the most important standards to enable the next technology revolution. IP professionals as well as directors in standard development should bear in mind some key considerations: