Who is leading the VVC technology race?

The next-generation video codec Versatile Video Coding (VVC) (H.266) offers significant technical advantages over its predecessors HEVC (H.265) and AVC (H.264) and competitors (eg, the proprietary codecs AV1 and VP9). Finalised in October 2020, VVC can achieve the same level of perceptual quality as prior video codecs with up to 50% improvement in video coding efficiency, supporting 4K and 8K ultra high definition and high dynamic range. The standard’s designers created it from the ground up with new applications in mind, hence ‘versatile’ in its name.

These performance gains come at an opportune moment, as the centrality of efficient video encoding in modern life grows ever more apparent. A study by Ericsson released last year forecasts that, even as total mobile traffic worldwide is set to quadruple by 2026, the proportion of that traffic for which video accounts will grow from 66% to 77%, assuming that the industry employs efficient compression technology.

Several factors feed into this explosive growth in transmitted video. For the first time, billions of people will have access to high-speed internet and video streaming. Global lockdowns due to covid-19 have drastically increased the prevalence of video streaming and conferencing. In addition, several new use cases for video are on the near horizon, including 360-degree video gaming applications, remote control over manufacturing machines and robotics, and healthcare applications (eg, remote surgery).

VVC was designed to meet the world’s demands for efficient video compression and support a variety of new applications. However, to unlock VVC’s potential, industry must account for thousands of SEPs. Patent holders will, in many cases, request royalties for these, and the royalty cost of implementation may play a role in the adoption rate of VVC.

Recognising both the value of speedy uptake of VVC to worldwide commerce and development and the potential obstacle that an opaque or excessive royalty regime could pose to this goal, interested companies formed the Media Coding Industry Forum (MC-IF) in 2018. Since MPEG-LA’s MPEG-2 patent pool began in the 1990s, video codec implementers have grown accustomed to obtaining all or most of the patent rights that they need to implement a codec through pools. Three patent pools serve VVC’s predecessor HEVC, and many contend that this plurality has impeded HEVC’s use. Accordingly, among MC-IF’s ambitions was the fostering of a single, dominant patent pool that would offer all or nearly all the patent rights that an implementer would need for a single price. As MC-IF has stated in recent press releases, the organisation’s membership, which now comprises 49 companies, did not align on a single pool administrator. Two participants in MC-IF’s pool fostering process, MPEG-LA and Access Advance (formerly HEVC Advance), intend to launch separate patent pools for VVC.

Nevertheless, a VVC licensing regime with broad industry support remains possible as video codecs have launched with multiple pools historically. For example, MPEG-LA and Via Licensing offered separate pools for the 2003-finalised standard AVC (H.264) –  presently the most widely used codec. With HEVC, the licensing ecosystem has become more stratified. Figure 1 displays the members of the three HEVC patent pools – HEVC Advance, MPEG-LA and Velos Media. Another licensing administrator – Sisvel –  offers implementers of the VP9 and AV1 codecs licences to some SEPs that are also licensed to HEVC implementers in other pools. 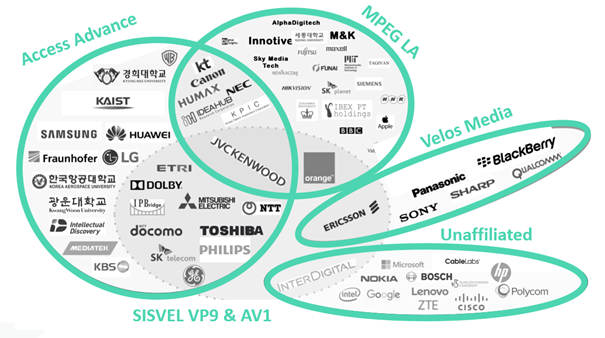 With a choice of VVC pools to join, SEP owners and implementers alike should consider the depth and strength of one another’s SEP portfolios. Complicating this effort is the fact that the universe of VVC SEPs is unknowable thus far. The patent declaration data for VVC –promulgated by the standards body ITU-T and the consortium Joint Video Experts Team (JVET) – is incomplete, as ITU-T does not require SEP owners to identify specific patents as essential. Indeed, as of February 2021, just 23 companies had filed declarations of VVC-essential patents with ITU-T, which is less than half of MC-IF’s membership.

One approach to identifying VVC technology leaders is to analyse the involvement of companies in the development of the VVC standard. This approach assumes a correlation between a firm’s apparent influence on VVC and the strength of its VVC SEP portfolio. JVET is contribution-based, which means that member companies can submit technical proposals for inclusion in the standard on approval by the membership. The resulting final VVC specifications have thus been reviewed by all participants in VVC standardisation – a significant cross-section of all global video compression expertise. As the experts usually work for companies in competition with one another, JVET is both collaborative and competitive.

Meaningful, convincing contributions require considerable research and investment. Regular participation in standards setting tends to accord a company credibility in JVET, which in turn allows such a company to position its own technology for inclusion in the standard. The counting and analysis of approved standard contributions is therefore one measure of how much share and influence companies have in the development of a standard such as VVC.

Figure 2 shows the top companies that have submitted approved VVC standard contributions. Here, the IPlytics Platform database gathered more than 8,000 VVC contributions, out of which only about 1,100 VVC contributions were identified as ‘incorporated’ in the final VVC standard (as of February 2021). Qualcomm leads the VVC contributor list, followed by Huawei, Bytedance, Sharp and MediaTek. Of the top five companies, Bytedance is the only one that was not involved with the development of VVC’s predecessor HEVC. Other new contributors for VVC include the China-based companies Alibaba, Kuaishou and Hikvision, as well as Korea-based Wilus Group. When looking at Figure 2, some of the listed companies belong to the same parent company, as in the case of  Sharp, which has been acquired by Chinese Foxconn, but are listed separately. 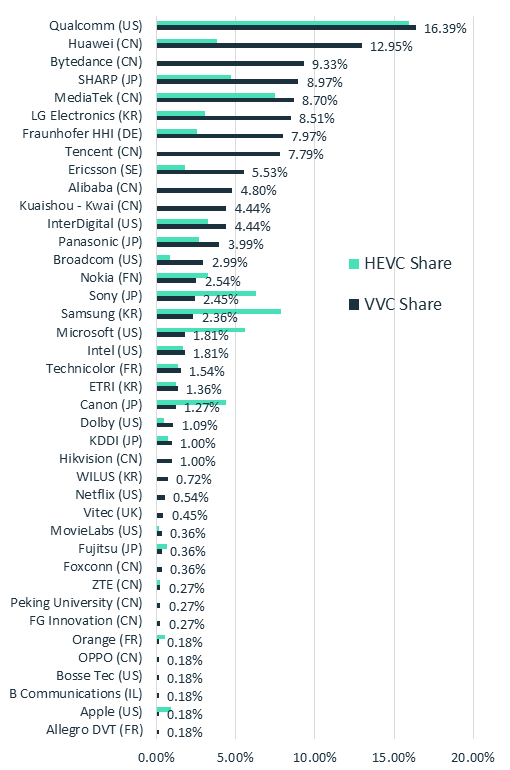 This is not a definitive listing of parties with VVC-essential patents. In fact, of the declarations of VVC-essential patents on file with ITU-T, several declarants are not listed here as contributors. This could reflect the collaborative and iterative aspects of standards setting, where one participant’s technology may wind up in contributions by another because it independently came up with similar innovations or because of informal – sometimes unattributed – collaborations. In any event, the statistics provided herein are a good starting point for understanding which firms are likely to have essential patents and the relative depths of their portfolios.

Efficient video compression is critical in many respects to ongoing economic advancement worldwide. The bulk of video currently transmitted over the internet is encoded using the 2003-finalised codec AVC, and we are approaching the upper bound technologically of what that codec can provide. VVC is poised to meet industry demands for video compression going forward.

With widespread deployment of VVC will come the issue of licensing VVC SEPs. Senior patent counsel and standard managers should bear the following in mind about VVC patents:

This article was written in co-authorship with Robert Moore at Caldwell IP Law.