Wireless charging is also used in power tools, electric toothbrushes and medical devices. The portable equipment can be placed near a charging station or inductive pad without needing to be precisely aligned or make electrical contact with a dock or plug. Other standard organisations beyond the WPC have started to develop wireless charging standards for other uses, such as the following to charge electric vehicles:

In order to identify wireless charging patents, the IPlytics Platform was used to search and combine data from standards, standard contributions as well as patents and SEP data. Yet wireless charging is mostly used for the charging of devices, such as phones, computers, tablets and smart watches. The first set of analysis focused on all worldwide filed patents for wireless phone charging (see Figure 1). The results show a sharp increase of patent filings over the years and especially since 2018 to a top count of almost 6,000 patent filings in 2019.

In order to identify all active market players in the wireless phone charging world, the IPlytics Platform was used to aggregate all identified wireless phone charging patents with regard to the patent portfolio of each patent owner, making use of entity disambiguation techniques as well as using a corporate tree database. Further, it counted patents in relation to the corresponding patent family to determine the number of unique patented inventions per company (see Figure 2). The results show that US and South Korean-based companies can be found among the top patent owners. Here Samsung Electronics is leading the pack, ahead of Qualcomm, LG Electronics, LG Innotek, Apple and Intel. While most of the top patent owners are handset manufacturers or chip manufacturers the table also lists car manufacturers such as Hyundai, Kia Motors or Ford, which own large wireless phone charging patents. 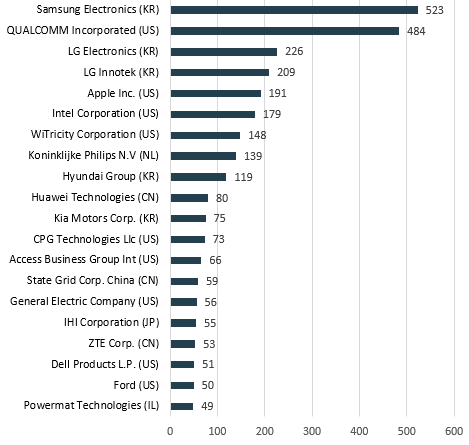 In January 2020 the MPEG LA patent pool administrator announced the availability of a licence for patents essential to the Qi standard, providing a one-stop access for wireless charging and power transfer. Among MPEGF LA, also Philips and Powermat Technologies published lists of SEPs licence for the Qi standard. Figure 3 shows the number of SEPs declared for the Qi standard as to patent owner. Only Philips, Powermat, General Electric, Bosch and ConvenientPower have declared that they own SEPs for the Qi standard. However, the results from Figures 1 and 2 suggest that there are hundreds, or maybe even thousands, of patents that could also be standards essential as major players, such as Samsung, Qualcomm or LG, which have not yet published any SEP declaration for the Qi standard.

Figure 3. Number of SEPs declared or pooled for the Qi standard

While the wireless charging of phones or other devices such a computers, tablets or smart watches has already been a market success, the wireless charging of electric vehicles is yet to rise. The IPlytics Platform was again used to identify patents that reference the three most relevant wireless electric vehicle charging standards ISO 15118 vehicle-to-grid communication, SAE J2954 wireless power transfer and SAE J1773 electric vehicle inductively coupled charging. Figure 4 shows the number of patents filed that reference ISO 15118, SAE J2954 or SAE J1773 over time. While patent filings for all three standards has been increasing the magnitude of the number of total patents is still small compared to the wireless phone charging patent filings, as Figure 1 demonstrates. 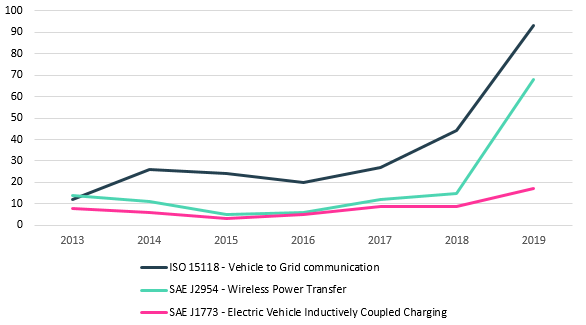 Figure 5 shows the patent ownership of patent families filed that reference the wireless charging standard ISO 15118. The list of companies is dominated by car manufactures with top patent owner, such as Ford, BMW and Hyundai. Beyond the auto industry, the platform identified companies from the industrial manufacturing sector, energy sector and semiconductor sector, including Siemens, Innogy and STMicroelectronics.

Figure 5. Number of patent families filed that reference ISO 15118 as to patent owner 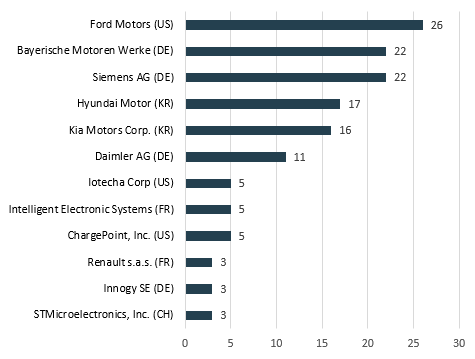 Future connectivity will not only be about wireless communication (eg, 5G or WiFi 6), but also wireless charging. Here, most wireless charging relates to charging a device, such as a smart phone, computer, tablet, smart watch, power tool, toothbrush or medical device. However, the wireless charging of vehicles has increased in importance, with the first standard projects set up at ISO and SAE.

The recently ratified Qi standard will become one of the most important standards to enable cordless charging of not only any device at a charging station, but also in cars or at an office desk or any surface where one may place a device. However, all wireless charging standards, in particular the Qi standard, are subject to an increasing number of patents, where some of these have already been identified as standards essential. IP professionals as well as directors in standard development should bear in mind some key considerations: