Since the enactment of the America Invents Act in Autumn 2012, litigating patentability challenges before the PTAB has generally been viewed as an all-or-nothing proposition. Although the enacting legislation and the implementing rules have always provided patent owners with the option of filing a motion to amend (MTA) the challenged patent’s claims during a PTAB trial, the reality was that few such motions were filed, and a very small percentage of those were granted. That picture began to change with the Federal Circuit’s decision in Aqua Products in 2017, and the tide has now turned with the announcement by the USPTO in March 2019 of a formal pilot programme designed to allow patent owners to more readily amend their patent’s claims during PTAB trials, such as inter partes reviews and post-grant reviews.

This evolving trend in MTAs is largely good news for patent owners, increasing their options in the context of saving a challenged patent claim, albeit a narrower one. The USPTO had previously signalled its desire to make the MTA option more popular among patent owners, and with the pilot programme now in place, early results from the first five months of 2019 show a marked uptick in the number of motions filed. In response to Aqua Products, and clear indications from the USPTO’s top brass that the agency was interested in encouraging patent owners to pursue amended claims through the filing of MTAs, the number of such filings began to increase from 47 in 2016 to 73 in 2017 and 100 in 2018, with a projected 134 for 2019, based on Lex Machina research tracking MTA filings in the first five months of 2019 (see Figure 1).

Motions to amend intended to be readily used by patent owners

In drafting the America Invents Act legislation, Congress clarified that patent claim amendments were integral to the new procedures: “[t]he Director shall prescribe regulations that… allow the patent owner to amend the patent” (House Comm Rep on the America Invents Act (1 June 2011)). Accordingly, the enabling legislation for amending patent claims during a PTAB trial provided that: “[t]he Director shall prescribe regulations setting forth standards and procedures for allowing the patent owner to move to amend the patent… to cancel a challenged claim or propose a reasonable number of substitute claims [but an] amendment… may not enlarge the scope of the claims of the patent or introduce new matter.” (35 USC Sections 316(a)(9) and 316(d)(3).) The USPTO’s regulations further provided as follows:

The USPTO fully “expected that amendments to a patent will be sought” (77 Fed Reg 48618, 14 August 2012), and further that the “current rules and practices for motions to amend [are] consistent with congressional intent and ‘striking an appropriate balance between the public’s interest in challenging the patentability of questionable patents and a patent owner’s interest in maintaining patent protection for a legitimate invention’” (80 Fed Reg 50722 (20 August 2015)). That expectation, however earnest, failed to materialise.

Figure 1. Motions to amend on the rise at PTAB 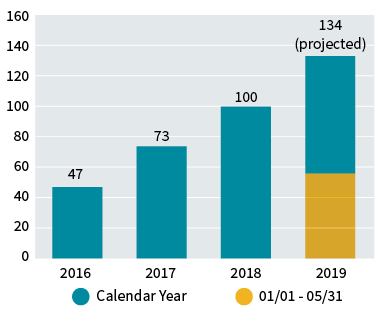 Consistent with the PTAB’s long history of handling contested cases (eg, patent interferences and inter partes re-examinations), the original procedures for MTAs were considerably less favourable for patent owners than they are today. Some of those early structural impediments included the following:

Anecdotally, practitioners generally understood that motions to amend were not often granted by the board, and thus such motions were filed with considerable trepidation.

The early years of inter partes review practice revealed that MTAs were not frequently filed by patent owners, and even less frequently granted by the PTAB. In response to the ever-increasing criticism by patent owners regarding the perceived unfairness of the MTA procedures, the PTAB undertook what was to become a pivotal internal study to ascertain whether the so-called ‘imbalance’ was fact or fiction. The results of that study, while unsurprising to in-the-trenches practitioners, were rather startling to the larger IP community (see Figure 2).

The largely futile historical MTA practice, as revealed by the 2016 PTAB MTA study, was soon to be called out by the Federal Circuit and USPTO Director Andrei Iancu, which would become the impetus for the PTAB’s significant revisions to MTA practice.

In evaluating the burden of proof allocation in MTA practice, the Federal Circuit readily recognised that the PTAB’s MTA procedures were effectively broken: “Despite repeated recognition of the importance of the patent owner’s right to amend during [inter partes review] proceedings—by Congress, courts, and the PTO alike—patent owners largely have been prevented from amending claims in the context of IPRs… The PTO’s statistics confirm that patent owners have consistently failed to obtain their requested relief on motions to amend. As of April 30, 2016, the Board had completely denied 112 of 118 motions to amend made by patent owners in IPRs, and partially denied motions to amend in four of the six remaining trials.” (Aqua Products Inc v Matal, 872 F3d 1290 (Fed Cir 2017) (citations omitted).)

In Aqua Products, the Federal Circuit swapped the MTA burden of proof from the patent owner to the petitioner, acknowledging that the petitioner properly bore the overall burden of proof in the inter partes review/post-grant review proceeding. In an important first step in amending MTA procedures, in November 2017 the PTAB issued new guidance stating that: “in light of the Aqua Products decision, the board will not place the burden of persuasion on a patent owner with respect to the patentability of substitute claims presented in a motion to amend” (PTAB Guidance (21 November 2017)).

Iancu also forcefully called out the apparent MTA problem in a 2018 speech to the American Intellectual Property Law Association (AIPLA):

Indeed, claim amendments have been relatively rare – filed in less than 10 percent of AIA trials – and infrequently granted. Of the already small number of cases where the Board decided a motion to amend, the Board granted or granted in part only 10 percent of such motions. Some have suggested that parties have simply stopped even trying to amend the claims because they see the effort as largely futile.

But the AIA statute specifically provides for claim amendments in IPRs, so in order to fully implement the intent of the AIA, we must find a way to make this amendment process feasible and meaningful. In other words, it is important to ensure that post grant proceedings are not all-or-nothing. It is not in the interest of the patent system as a whole to invalidate a patent entirely if it actually describes patentable subject matter, and appropriately-scoped claims can be drafted.

In conjunction with Iancu’s AIPLA speech, the PTAB discarded the traditional BRI standard in PTAB trials and formally adopted the Phillips claim construction standard used in district court litigation (83 Fed Reg 51340 (11 October 2018); Phillips v AWH Corp, 415 F3d 1303 (Fed Cir 2005) (en banc)). The new rules applied to all inter partes reviews and post-grant reviews filed after 13 November 2018. While many commentators argue that the differences between the BRI and the Phillips claim construction standards are essentially non-existent, most agree that the change at least improved the perception of inequity (ie, that a patent owner’s claims are no longer construed narrowly in infringement litigation, but broadly in patentability challenges). 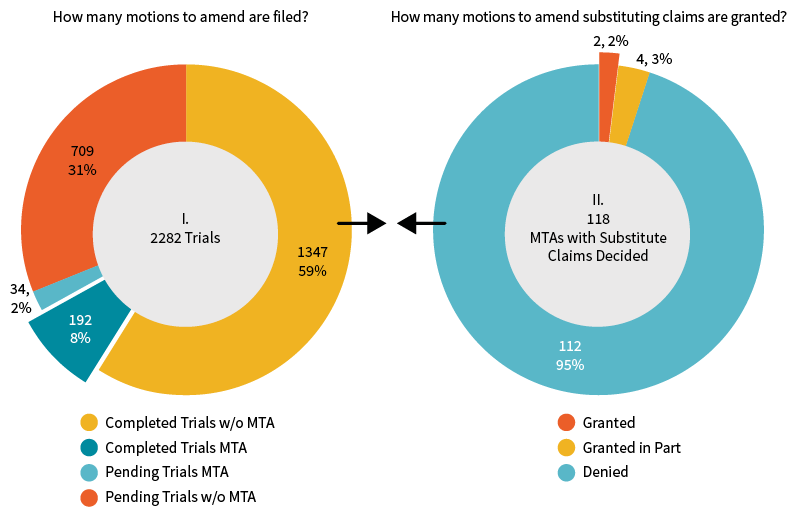 The PTAB further altered the standard trial timeline to accommodate both of the two optional new procedures (see Figure 3).

The procedures and standards for MTAs were further clarified in early 2019 when the PTAB issued a precedential decision that provided detailed guidance regarding the statutory and regulatory requirements for motions to amend (Lectrosonics Inc v Zaxcom Inc, Cases IPR2018-01129, 01130, Paper 15 (25 February 2019)). The Lectrosonics decision elaborates on a number of key MTA issues, including: 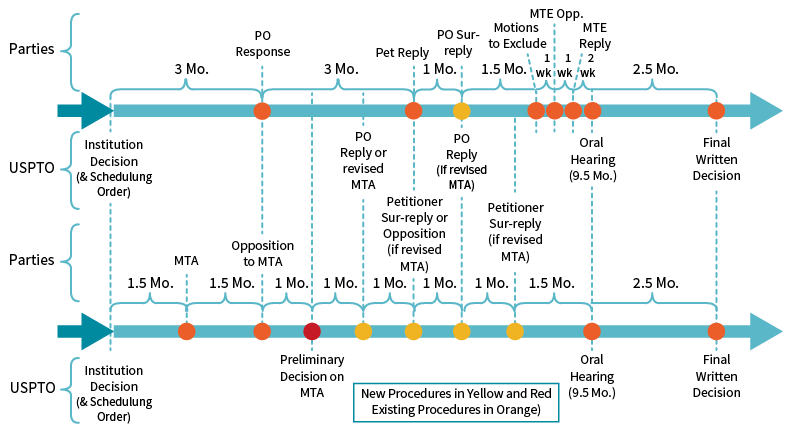 While PTAB panels had provided much of this guidance previously, the PTAB’s decision to elevate Lectrosonics to precedential status signalled that all PTAB panels would be required to apply the same MTA standards, providing increased predictability for patent owners.

Practical limits on motions to amend

While the MTA practice is certainly experiencing a marked upswing, there are many inherent practical and strategic issues that are likely to ensure that MTAs will never become routine:

In addition, while the statistics predict that MTAs for 2019 will be in the range of 120 to 140 motions, that number remains relatively small (ie, below 10%) when compared to the predicted number of inter partes reviews and post-grant reviews of about 1,500 to 1,600 cases.

The future of motions to amend

The PTAB’s recent substantive and procedural changes for MTAs have no doubt been effective in encouraging more patent owners to seek claim amendments. The upswing in MTA filings, which is counter to the overall downward trend in inter partes review and post-grant review petitions, can be viewed as a success for the USPTO’s endeavours to, at a minimum, increase the perception of fairness of the MTA procedures. Of course, it is still too early to tell whether the increase in MTA filings is the new norm, or whether those filings will eventually drop back to their historically marginal levels. A key factor will be the all-important ‘second chart’ of the overall statistical picture – of those MTAs that are filed, how many are ultimately granted? Given that it takes one year after trial institution for the PTAB to issue its final written decision (including its decision on any MTA), the proof of the pudding will be in the eating.

From an even broader perspective, the frequency of MTAs naturally depends on the volume of inter partes review and post-grant review petitions, which in turn depends largely on the volume of patent litigation, coupled with the effective kill rate of PTAB challenges. As long as patent litigation remains a strong industry driver, and the PTAB remains (at least statistically) the most effective forum to successfully challenge the patentability (validity) of an asserted patent, then PTAB practice will remain active and a necessary consideration for all patent litigants, plaintiffs and defendants. And with the PTAB’s new MTA rule changes, with likely even more changes to come, MTAs are now a much more significant part of the parties’ important strategic considerations. 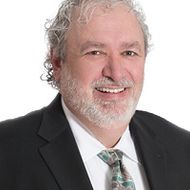