If a Chinese company goes to another country to sell products or provide services, it is advisable for it to use a trademark in the language of that country in addition to its own Chinese-language mark. Similarly, in China, a Chinese-language mark can be just as important for a foreign company as its foreign-language counterpart – if not more so. It is essential for a foreign company that wishes to sell goods or provide services in China to have its English or foreign-language marks registered in China. However, some companies, including many smaller ones, hesitate, neglect or refuse to register Chinese-language marks in China because of uniformity or the difficulties of translation, among other reasons.

Why register a Chinese-language version of a foreign-language mark?

In a Chinese market, Chinese customers are the target customers. Compared to other non-native languages, the Chinese language is much easier for these customers and the public to remember, pronounce and accept.

China has adopted the first-to-file trademark system. If a Chinese-language version of a foreign-language mark is not selected quickly enough, it is likely that distributors, manufacturers, customers or someone else may select and promote a Chinese name and may even get it registered to block the marketing and business of the original mark in China. It is also possible that the longer the delay in registering a Chinese-language mark, the less choice and more blocks will be faced when registration is finally sought.

Localisation of a Latin-letter mark is necessary in China. All international well-known trademarks have Chinese-language marks in China, including Apple (苹果), Nike (耐克), IKEA (宜家), Carrefour (家乐福) and Google (谷歌). Overseas businesses do not have to attach these Chinese-language marks to their goods or services for products which are labelled identically across the globe, but they do need to use them in their sales and media promotions in order to achieve a positive effect on its target customers.

A proper Chinese-language version of a foreign mark ideally has no more than four Chinese characters. It should be easy to remember, pronounce and have a good meaning or invoke a positive association in the mind of the target customers.

The easiest and best way to work out a Chinese-language version of a mark is to use the direct Chinese meaning of the foreign-language mark, if the mark or each part of the mark has a dictionary equivalent meaning and that meaning is positive. In this regard, there are good examples such as the well-known APPLE with its Chinese language ‘苹果’ and MICROSOFT with ‘微软’.

However, if the Chinese direct translation lacks distinctiveness, transliteration or translation by pronunciation of the foreign mark is recommended.

A foreign-language mark may have a dictionary meaning in Chinese but the direct translation into Chinese may sound awkward. In this case, the Chinese wording would need to be embellished and made more compatible with Chinese reading habits.

The McDonald’s ‘i’m lovin’ it’ slogan, the bakery BreadTalk and the magazine MoneyTalks, all use a liberal translation for their Chinese-language marks. McDonald’s uses ‘我就喜欢’ (‘I love it anyway’) for ‘i’m lovin’ it’; BreadTalk uses ‘面包新语’ (‘bread new language’); and MoneyTalks uses ‘钱经’ (‘money book’). These Chinese-language marks are pleasant to the ear of Chinese customers.

These Chinese transliterations are easier to remember and sound similar to their foreign counterparts.

Combination of transliteration and liberal translation

The automobile brand BMW uses ‘宝马’ as its Chinese-language mark, which sounds like ‘Bao ma’ and means ‘a horse which is able to run a thousand miles easily’, reflecting the sound and meaning of its foreign counterpart.

The cola giant Coca-Cola uses the pronunciation ‘可口可乐’ (‘ke kou ke le’) as its Chinese-language mark, which means ‘drinkable’ or ‘tasty’ and ‘happiness’.

Should the above four translation methods prove incompatible to the products bearing them or have already been registered by others, a Chinese-language mark may be sought with the help of free translation.

The well-known fast-food restaurant Pizza Hut and cosmetics giant Clinique have used free translation. Pizza Hut has been translated into ‘必胜客’ (BI SHENG KE) and Clinique has been translated into ‘倩碧’ (Qian Bi). The Chinese language of the two trademarks does not reflect either the meaning or pronunciation of their foreign counterparts. However, they are well-accepted in China by the Chinese public and have been successful.

Risks when seeking to protect a Chinese-language mark

If a foreign company figures out a proper Chinese-language mark through one of the five translation routes the mark may be registered smoothly. Such smooth registration is increasingly unusual due to huge number of new applications in China each year.

If an applied-for Chinese-language mark is refused in the examination proceedings, it is advisable either to rely on available proceedings (eg, opposition, invalidation or non-use cancellation) to get rid of the prior marks or to purchase the prior marks.

It may cost more money, but it will take less time to purchase the prior marks than to remove them through proceedings. However, the certainty is higher compared with removing the prior marks.

If the proceedings for removing the prior Chinese marks are not the best choice or cannot work successfully, then purchasing the prior marks is a way out.

This happened to Sony Ericsson – Sony is a Japanese electronics giant and Ericsson is a Swedish mobile-phone manufacturer. The two companies merged into Sony Ericsson Mobile Communications AB and their mobile-phone brand is called Sony Ericsson. The Chinese-language version of this brand name is transliterated into ‘索尼爱立信’, the easy combination of the Chinese-language mark of ‘Sony’ and ‘Ericsson’. It has five Chinese characters and is neither easy to remember nor to pronounce. As a result, the Chinese public nicknamed it ‘索爱’, a combination of the first Chinese characters from Sony and Ericsson. Sony Ericsson refused to accept the nickname and issued a written declaration in public.

Against this background, someone else registered ‘索爱’ in connection with mobile phones. Sony Ericsson filed to have this registration removed but failed in its attempt to do so. Sony Ericsson filed for judicial review before the first-instance court and later appealed to the Beijing Higher Court – all attempts failed. The case even went to the Supreme Court but was not overturned. The main reason was that Sony Ericsson never accepted ‘索爱’ as its Chinese-language mark, even though the public agreed on the mark. 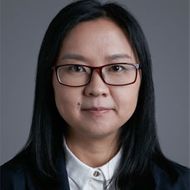 Fenhong Paula Pei received her MA from the University of International Business and Economics in 2006, and has been a qualified attorney at law since 2010. Ms Pei studied civil law at Renmin University of China as a postgraduate from 2012 to 2014.

She has been working with trademarks since 2013, previous to which she worked for CDM projects at Sindicatum Carbon Capital for seven years. Ms Pei joined Panawell & Partners in November 2016. She has experience in trademark counselling and searches, applications for registration, opposition, review, invalidation, cancellation and appeals, licences, assignment and renewal, as well as trademark litigation.