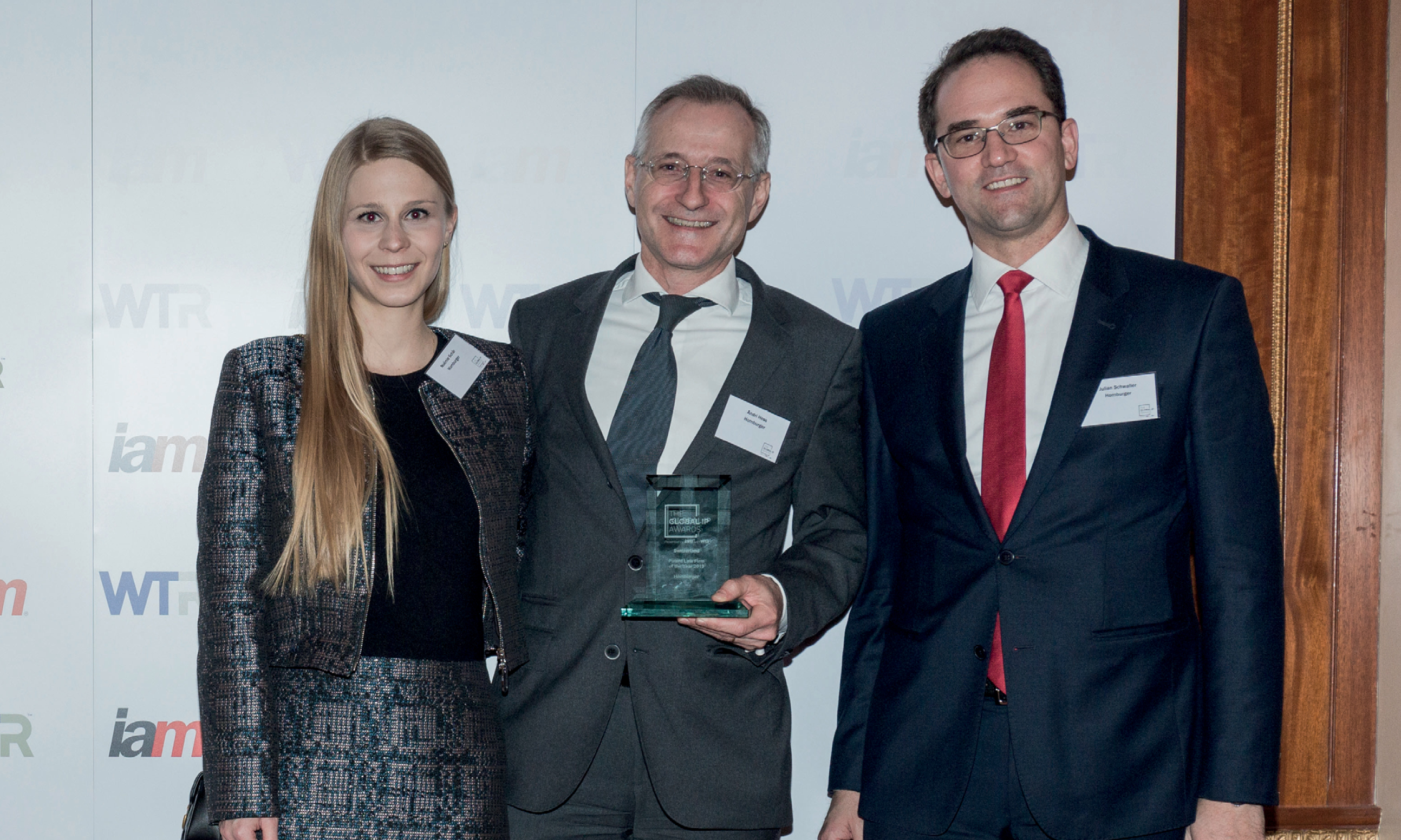 The Homburger team collecting their award

Q: Can you tell us about your patent practice (team size, practice focuses, key individuals, etc)?

A: Homburger’s IP/IT practice is one of the largest in Switzerland, comprising 16 lawyers. It has a particularly strong focus on patent law, with three partners working primarily or at least regularly in this area. All partners and counsel are internationally recognised specialists in at least one of the focal areas of our IP/IT practice.

Our patent work covers a broad range of technical fields, with most cases coming from the life sciences, food, micro-mechanical, electronic, telecoms and machine industries. We represent clients in proceedings before the courts and authorities, as well as in arbitration proceedings, and the team’s practice further comprises a wide range of transactional advice.

The patent team is headed by Andri Hess. Besides being a partner at Homburger, Mr Hess is co-editor of Life Science Recht, the only Swiss periodical on life sciences law, and acts as an associate judge at the Swiss Federal Patent Court, the Swiss special court of first instance for civil law disputes concerning patents.

The leadership of the team is completed by Georg Rauber, head of Homburger’s IP/IT practice overall, and Gregor Bühler, deputy head of the IP/IT and litigation/arbitration practice teams.

Q: What are the keys to success for your patent team?

A: One key to our success is that, while we closely cooperate with technically trained professionals in contentious patent matters, we never simply delegate technical work. We play an active role in understanding and developing the technical argumentation in the cases that we represent.

Further, permanent exposure to complex legal and technical problems relating to all aspects of patent law – including issues of patent infringement and patent validity, as well as patent licensing and R&D contracts – ensures that our team members are and remain at the forefront of patent disputes in Switzerland.

Q: From a patent perspective, what was your highlight of 2018?

A: It is difficult to single out one highlight from the many that we experienced in 2018. One case that stands out was the first ever multi-patent FRAND litigation before the Swiss Federal Patent Court, in which we represented the two parties on one side of the dispute. The case was ultimately settled, but it showed that the Swiss Federal Patent Court is well prepared for this type of dispute.

Q: How do changes in the broader European patent landscape affect your practice?

A: In Switzerland, the patent community is closely following the meandering evolution of the Unified Patent Court (UPC) – in which Switzerland will not be able to participate. Will it come about and, if yes, when; and how will it affect our patent practice? Typically, patent disputes are brought to the Swiss courts in two scenarios: if either the allegedly infringing products are manufactured in Switzerland or the Swiss market is important enough to justify litigation, irrespective of the legal situation in UPC countries. We expect that this will remain the case after the UPC has become operative.

Q: What challenges are being raised by clients most frequently at the moment?

A: Three issues that we encounter frequently at the moment are:

The Truvada judgment was a 2018 landmark decision in which the Federal Supreme Court replaced the infringement test – which it had previously held applicable in its 1998 Fosinopril decision and which had been relied on ever since – by the disclosure theory for new SPCs.

Q: If you could make one change to the patent world what would it be?

A: The patent system as a whole would greatly benefit if more countries implemented specialised courts.

Q: What do you think are the big trends that will affect patent lawyers over the next few years?

A: The following should be considered:

Q: Is the job of the patent attorney becoming easier or harder – and why?

A: One grows with one’s tasks. We hope that the job of the patent practitioner is becoming harder.

Q: In order to remain successful how do patent teams at the leading law firms need to evolve?

A: Success will continue to depend on a seamless team up of patent lawyers with patent attorneys and on cross-border capabilities, which require firms to continue investing in establishing and maintaining contacts and relationships with leading foreign patent teams.

Q: Finally, what advice would you give to younger practitioners looking to pursue a career in patent law?

A: Stay tuned to new technologies and get involved in your patent community.