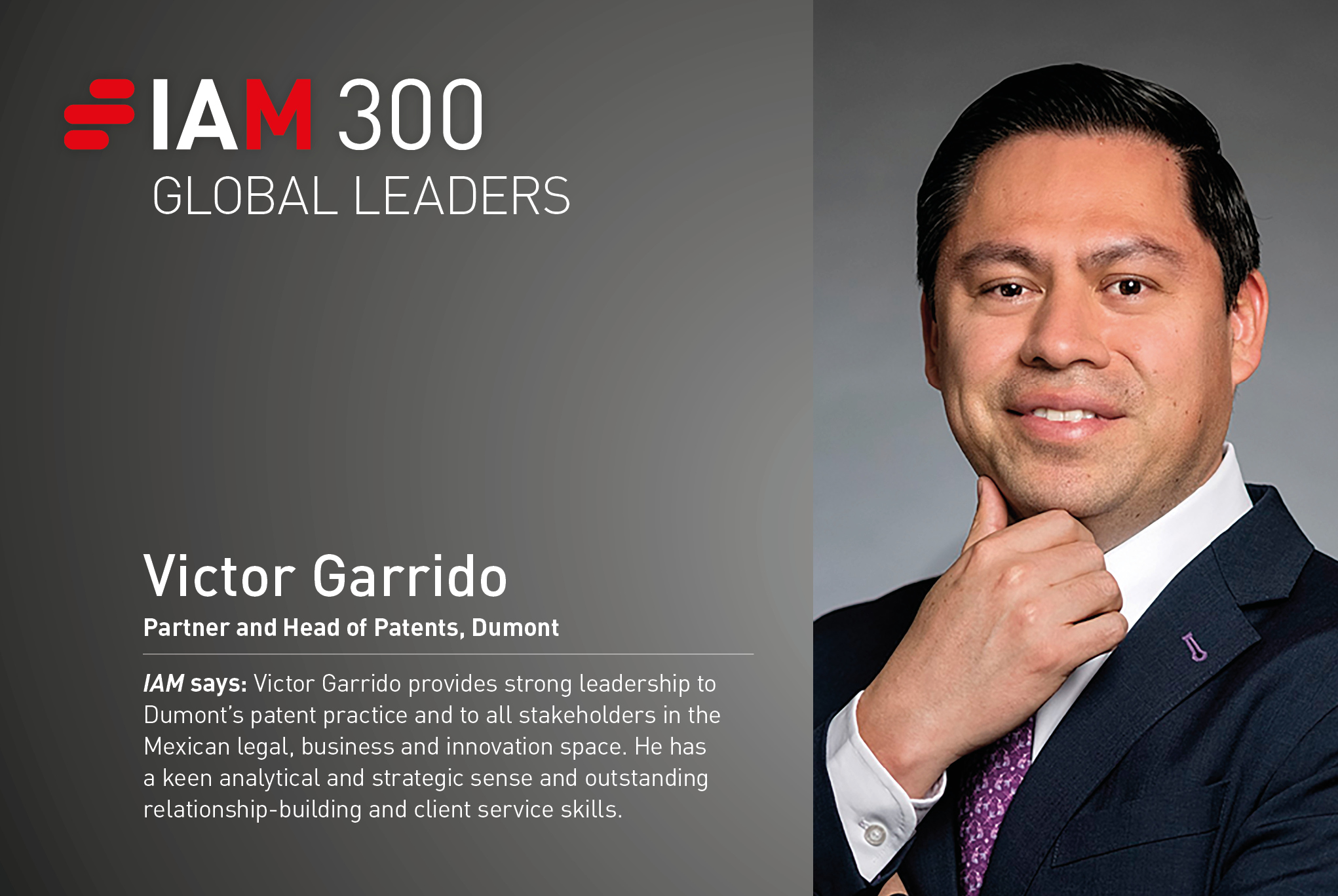 Dumont’s expertise in patent drafting makes it stand out from other Latin American IP firms. Could you tell us how your role as head of patents helps the firm achieve this?

Patent drafting is a strategic activity. With this in mind, we make continuous efforts to deliver applications that take into account the plurality of issues that might affect a patent document during its life cycle: prior art, patentability and invalidation criteria, as well as claim construction in a variety of jurisdictions, possible transactional and market issues, among others. One of the most rewarding duties I have had as a patent practitioner is implementing and overseeing patent drafting work at the firm. I would say that the constant sharing of knowledge and experience with our team members, independently of the technical field in which each of us specialises, constitutes the basis on which we have built a reliable and evolving patent drafting practice that enables us to provide a high-quality drafting service to our clients, who can eventually evaluate and confirm that the delivered texts properly meet their immediate expectations as well as their needs over time.

What changes would you like to see in the SEP landscape, and do you think that they will happen?

I would like to see more reliability in the balance between declared and true essentiality and to try to fix the issue of undeclared patents covering standards. The number of SEPs is not only growing, but there are signs indicating that this growth tendency is exponential. Currently, for example, it has been reported that there are more than 15,000 standards covered by around 405,000 patents, which have been declared essential. These trends themselves pose and will continue to pose serious challenges to the SEP landscape for both patent owners and technology implementers. Merely trying to keep track of the mentioned massive numbers is difficult. On the other hand, a report by the European Commission suggests that between only 10% and 50% of declared patents are truly essential. One of the outcomes of this situation is a sharp rise in the number of disputes among competitors. I do not claim to know how to resolve this situation but am confident that technology itself, particularly AI, will be fundamental to trying to achieve a better status quo.

Which aspect of your work do you enjoy most and why?

I definitely enjoy teamwork and think it is at the heart of our way of working. I feel fortunate that I have been a member of several magnificent groups during my career, within which I have been able to contribute from different positions and perspectives. I learned that if you really engage with the tasks being carried out by a team, the possibilities in which you can support it are unlimited. Of course, you first need to focus in complying with your assignments and optimising the performance of your role within the group. What I have found is that there is always room for contributions that will allow a better result to be obtained in the short term and, more interestingly, to strengthen the teams’ performance in the medium and long term. Currently, I feel fortunate to have the chance to lead a team. This is certainly a unique opportunity to better deploy this cooperative approach and to communicate it to my team members by taking actions that, perhaps, are more visible now than was previously the case. The pragmatic reasons for continuing this scheme are self-evident. However, my personal satisfaction every time the team finishes a project or reaches a goal is not only energising but a great motivation to start the next one with high expectations for succeeding all over again.

You have represented a variety of clients ranging from domestic individual inventors and start-ups to Fortune Global 500 companies. How do you tailor your approach to the type of firm that you are dealing with?

I work under the premise that each client is not only different but special. Consequently, one issue I consider deeply when defining the framework in each case is the client’s singularities. In my opinion, company size is only a reference. In reality, clients are each special because of their kind of business, their market context, strengths and weaknesses, among other aspects. There is work to do in order to understand each client’s specificities before, during and even after the execution of a service. This work is reflected not only in the quality of the service provided but in the impact that it has on the client’s business. In summary, my approach ultimately focuses on optimising the client’s position within its business environment, particularly, but not limited to, maximising opportunities and minimising risks.

What is the biggest career challenge that you have faced – and what can others learn from how you overcame it?

The combination of being head of patents and becoming partner during the pandemic was a key challenge for me. I needed to dip into knowledge and skills I acquired some time ago when the possibility of performing said tasks simultaneously seemed unlikely. I have already mentioned the cooperative approach to teamwork that, when the pandemic started, I had already shared with some other team members and which was further shared as a result.This allowed me to coordinate patent department activities appropriately amid the lockdown because we were all willing to do more than strictly necessary to achieve our goals. We wanted to do this in such a way that we all learned from each other, despite also covering absences. Under this approach, analysts became familiar with sub-managers’ duties and sub-managers became familiar with managers’ activities and so on. I completed studies in business administration earlier in my professional career under the expectation that I would eventually need them. I have also acquired some soft knowledge and skills that, in my opinion, better helped me settle into the partnership. If this experience is to serve others, I can only suggest to try to be prepared in advance. If someone is in a determined position and is already familiar with or masters the corresponding duties and responsibilities, nothing prevents that person from looking into activities and skills associated with the next level in the organisational structure. In the end, I know few people who would say no to the question: “Is there something else I can help with so the team improves its performance?”

What are the key skills that a patent litigator needs in order to succeed?

How would you characterise the Mexican IP deals market right now?

Information about IP deals is generally not publicly available in Mexico. However, given the country’s particularities, I would say that the IP deals market could be characterised as being of relatively low intensity. Mexico receives a significant amount of foreign investment, and players in the market try to arrive with their own IP assets in such a way that transactions have often been performed overseas before, for example, initiating preparations for protection. As to the domestic industry, despite continuing efforts, it is not particularly focused on intellectual property.

What trends do you see emerging in FRAND licensing, and how can companies best prepare themselves to take advantage of these?

FRAND licensing has not been an issue of particular concern in Mexico, at least from the patent standpoint, but market dynamics show that the country is far from oblivious to the matter. Mexico is an important market, and global concerns have an impact sooner or later. In recent years, we at the firm have cooperated with some international entities on the specific work of validating SEPs that have been found to be in force in Mexico. One emerging trend is the intention of some countries to legislate on the topic instead of letting everything develop through litigation. At the same time, there is also a trend to establish FRAND licensing from a global approach instead of on a case-by-case or country-by-country basis. Companies doing business in technologies associated with standards should try to keep track of developments in international legislation and identify the networks that are being formed to handle, from the mentioned global perspective, both essentiality and FRAND licensing-related issues.

Can you tell us about the biggest challenges that businesses in Mexico face when it comes to commercialising their intellectual property?

As mentioned, Mexico attracts a great deal of foreign investment, and overseas players usually outline their IP strategy, including matters related to commercialisation, when they enter into new business partnerships. Moreover, they usually seek professional counselling in this matter. Unfortunately, IP culture is not particularly developed in the domestic industry. This is reflected in the lack of intensity of IP creation and its protection. Reasons for the former are diverse and are out of the scope of this question. I would say that there is a gap to be filled when it comes to the protection of creations deserving rights. Certainly, another important point is the professional advice that domestic players obtain in order to deploy a suitable IP commercialisation plan. There has been a trend from many inventors and start-ups to try to protect and commercialise their intellectual property by themselves. Although this might change in the medium term, currently, the results of such approach are not optimal. A large part of R&D activities in high-tech fields is performed by universities or similar institutions, many of which have their own in-house technology transfer offices. These tend to be sufficient for obtaining protection but might struggle when it comes to negotiations and agreements, or IP valuation or audits. Independently, we can say that the number of success stories related to commercialisation are still far from being optimal. This is also a reflect of a missing functional academy-industry linkage – an area in which there is still much work to be done.

How do you expect the Mexican patent litigation landscape to develop in the next five years?

Mexico has enacted its new Industrial Property Law, which entered into force in November 2020; regulations thereof have yet to be enacted at the time of writing. The new law contains differences with regard to litigation in general, such as the introduction of an alternative dispute resolution mechanism for infringement actions, the entitlement of the Mexican Patent Office to calculate and award damages when ruling on infringement cases and the impossibility of amending the claims of a patent involved in an invalidation action. I think that the most significant developments related to patent litigation in Mexico in the upcoming years will surround the enforcement and interpretation of the new provisions, including the missing regulations.

Victor Garrido is an industrial chemical engineer who specialises in IP law. He has more than 20 years’ experience in handling matters related to patents, industrial designs and utility models. Mr Garrido has represented a variety of clients in a plurality of technological fields, from individual inventors and start-ups to Fortune Global 500 companies. As head of patents, he oversees all activities concerning inventions at Dumont, including the development of the firm’s patent portfolio.