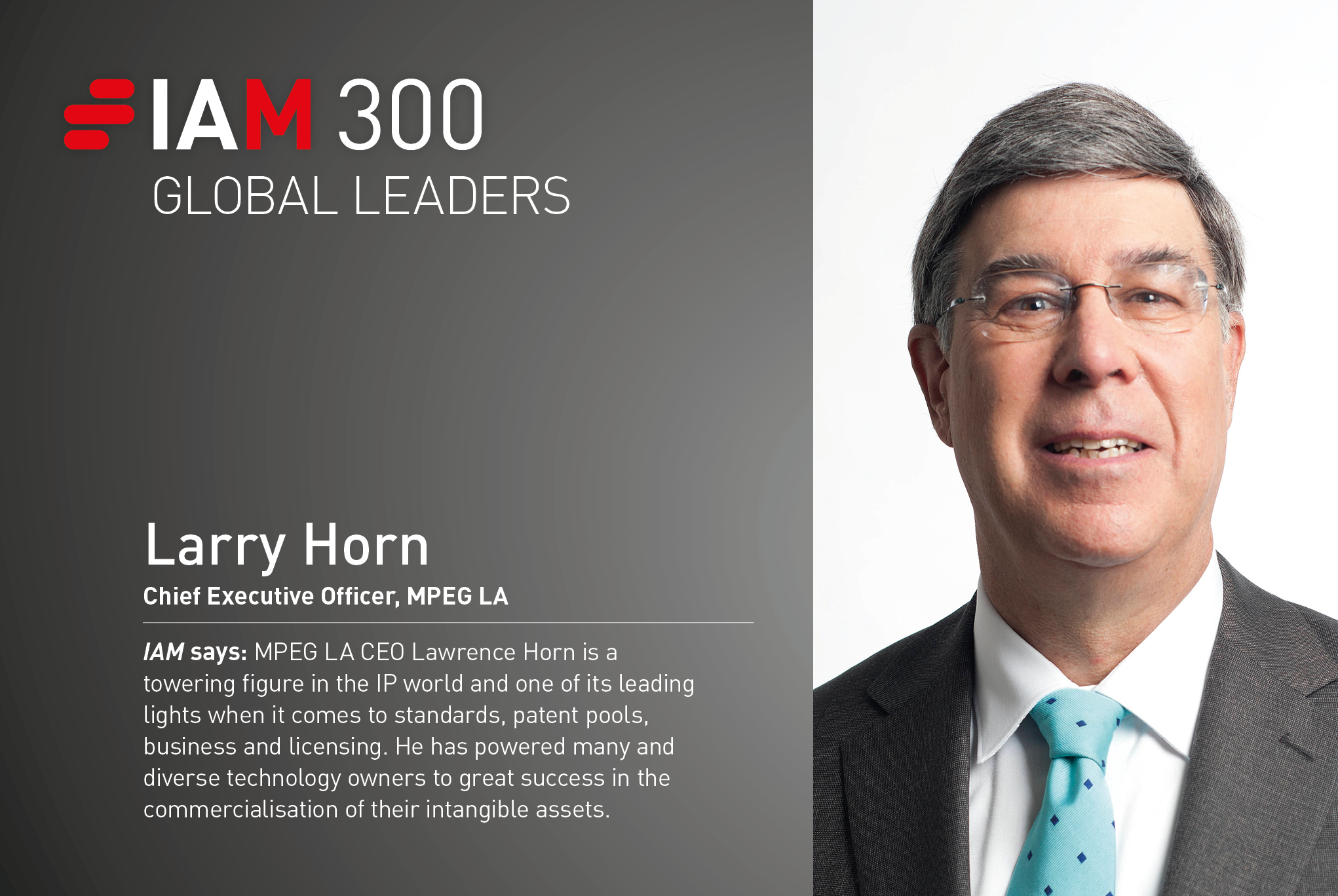 You are president and CEO of MPEG LA, LLC, the world’s leading provider of one-stop licences for standards and other technology platforms. What has been the secret to your success?

Understanding that the market does not build business models to conform with licence terms, and that terms should not be developed with the expectation that business models will be altered for them. The market builds business models to sell products, and licence terms should be developed to work in concert with them and the products they produce. No matter what terms patent holders may wish to impose, the market ultimately determines whether a particular technology will be widely adopted and what licensing terms are reasonable. There are many reasons why a licence may be unsuccessful, but one that works at odds with the market is prone to failure. Also, it is key to understand that licensees and licensors are both customers with the desire and right to know and count on what they are buying, and that these licences will be administered fairly and impartially. Among other things, it has been a fundamental tenet of MPEG LA pool licences, since inception, that pre-existing licensees can count on a licence under all SEPs that licensors and their affiliates presently or in the future have the right to license, even if licensors terminate the pool’s right to grant licences to future licensees.

Reasonableness is a two-way street; reasonable access for licensees must be balanced with reasonable return to licensors. If royalties are too high, users will not pay them. If royalties are too low, patent holders will not join. Licences must be priced for wide acceptance and mutual value to a mass market. Transparency, fairness, non-discrimination and most favourable royalty rates are key. A pool licence is a public trust. Patent pools have a reputation for principles and expectations consistent with competition law guidelines on which the market has come to rely. Efforts to re-enact historic results without these underlying values confuse the reasons for their creation and success.

What three things would you say make a world-class IP strategy?

First, establish a reputation for reliability, integrity and quality. Second, treat licensees and licensors impartially without favour. Last, while patent holders are present in their capacity as licensors, the licence development process may serve as a prospective trial proxy for real-world licence negotiations, informed by the independent business interests of participants representative of universities and other research institutions, companies that license patents, companies paying royalties for products they make or sell, and companies that do both.

The landscape for patent eligibility in the United States continues to lack certainty – what predictions would you make for this area in the next 12 months?

The landscape begs for clarity and balance in support of innovation, but between the hotly contested influence and uncertainty over policies that change with each election cycle, the lack of a grassroots constituency for patent issues among voters and uneven application of the law among courts, I will refrain from making a prediction.

What, in your opinion, are the key steps of a patent monetisation process?

For pool licences: identify a market problem to be solved where freedom of operation and avoidance of conflict are desirable among many licensors and many licensees for which a pool licence offers a serious alternative to bilateral licences. A patent pool established purely for revenue generation that does not solve a market problem will do neither. Price the licence for retail sale to a mass market and build mass market acceptance one licensee at a time to create a record of fair, reasonable, non-discriminatory application. Target licensable products that are easy to identify and count, and offer the same licence to everyone. Tell the truth. Be transparent regarding how illustrative patent claims read on the standard. Point out fairness, efficiency and business value of the licence as an alternative to negotiating separate licences with individual patent holders and answer all questions without exaggeration or defensiveness. While experience shows that enforcement may be unavoidable, it should be intended as the exception, not the rule.

How would you characterise the IP transactions market in the United States right now?

Volatile. Imbalances created by patent uncertainty, enforcement affordability and unavailability of injunctions leave the current US patent system at risk of irrelevance and obsolescence for failure to keep pace with technology and limitations on accessibility that encourage preferences for IP alternatives like secrecy.