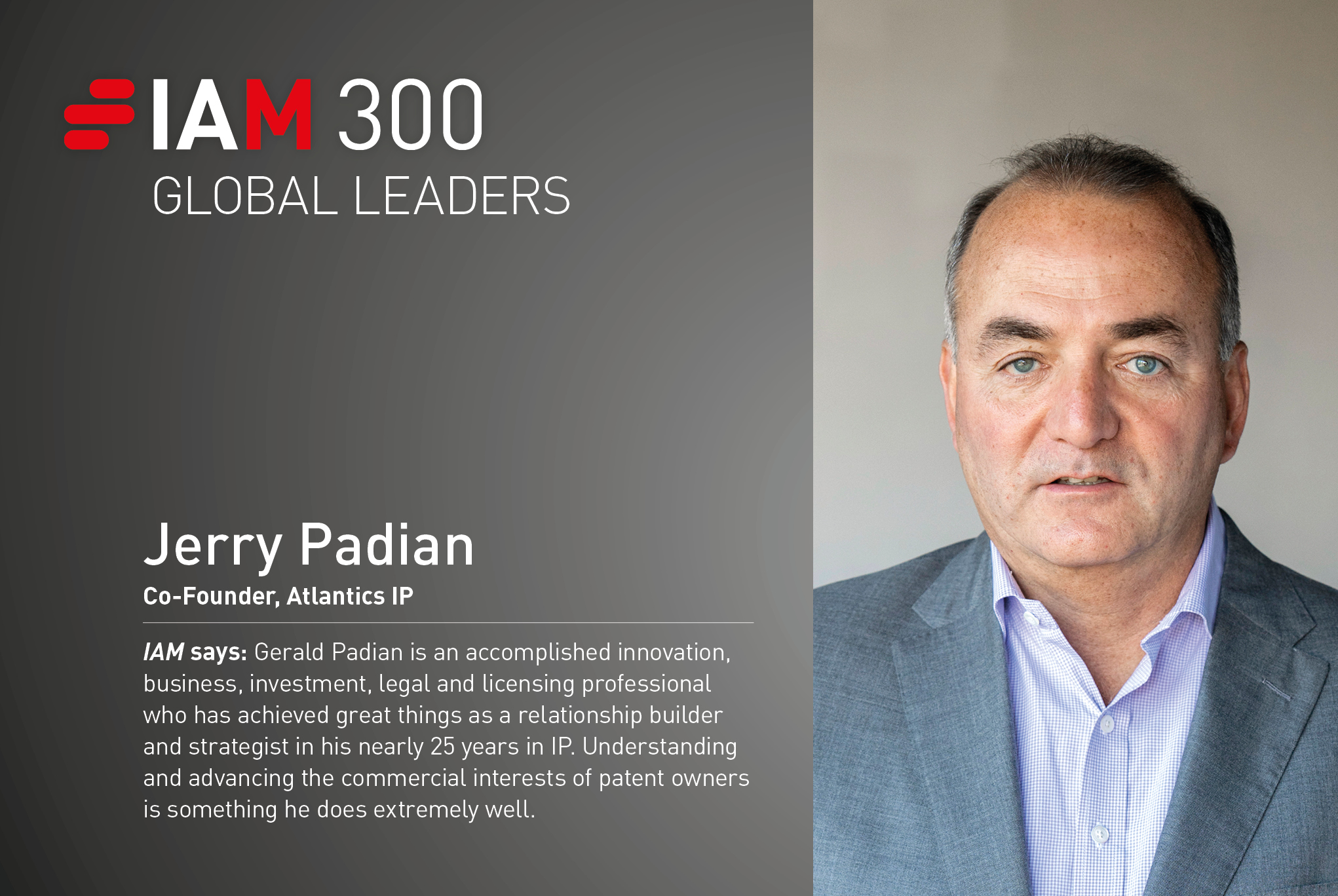 What led you to found your own firm and what advice do you have for anyone considering doing the same?

I came into the business after co-founding an operating company that had developed innovative data compression technologies and products. The company struggled in large part because of rampant infringement of its patents by much larger companies. It was this realisation that led me to the patent enforcement space. My advice to anyone considering entering this industry would be to approach it with the same passion and perspective as an inventor or small start-up since that is where innovation comes from and that is what the patent system was designed to protect.

As someone who works with global patent portfolios, what in your experience do some countries do better than others to make their patents more valuable assets?

Europe and to a certain extent Asia have modelled their systems in large part on the old US system. They have moved away from the old European model of a ‘royal patent’, designed to protect established companies and industries from start-ups’ disruptive technologies. The United States, unfortunately, is going in the opposite direction, circling the wagons around established industries and companies in a misguided attempt to protect their current technological advantage. For instance, in Germany time to trial can be less than a year; the courts do not get bogged down in voluminous and unnecessary discovery and the associated disputes; every patent holder has the right to an injunction; often the courts will hold preliminary hearings cutting right to the core of the issues narrowing the scope, and they bifurcate infringement and invalidity so that infringement can be assessed first and then validity can be assessed if such is still necessary. In the United States, however, getting to trial can take years, defendants are allowed to drag out issues including venue and discovery, few patent owners have a right to a court injunction or the same remedies before the International Trade Commission and many courts will stay litigation pending subsequently filed inter partes reviews.

What common mistakes do parties make when embarking on a licensing negotiation – and how can they avoid them?

What changes have you seen in the patent valuation ecosystem over the course of your career?

The appreciation for companies like ours and how we can support and sustain the innovation ecosystem has improved over the years but is still largely misunderstood and misrepresented. Intellectual property has become one of the most valuable asset classes; and accordingly, how it is valued has evolved and changed over time. In addition to non-performing NPEs slowly gaining recognition for the role that they can play in realising value in patents, helping patent owners generate revenue from unused or under-appreciated assets, helping compensate inventors for their ideas, helping businesses level the playing field with competitors, and returning revenue to the life cycle that fuels the inventions of the future, we have seen various other players also emerge in the patent valuation ecosystem (eg, AI and blockchain technologists). How effective they will be remains to be seen, but we can certainly learn from them.

How can companies better achieve the full potential of their patents, monetarily or otherwise?

Whether due to lack of understanding of their own patents or fear of undermining business relationships, or facing the risk of a countersuit, companies do not leverage their patents nearly as much as they should. First and foremost, companies need to understand what patents they have and assess their usefulness to the business and its trajectory, offensively and defensively. If the patents have no role in the company, they are often abandoned, which is a lost opportunity. Greater consideration should be given to NPEs as a way to generate revenue for the company.

You have extensive experience in the development of emerging technologies. Which technologies are currently having the biggest impact – and how is this shaping your work?

It has been remarkable to have had a ringside seat to numerous emerging technologies in the past 20 years, from data compression to touchscreens, OLEDs to NAND flash memory, wireless charging to contactless payments. It is exciting to consider where technology may take us. Presently, and perhaps accelerated due to covid, technologies underpinning how people communicate and consume information (eg, radio access networks such as 5G, wireless data networks such as WiFi 6 and wired data network deployments like Fiber-to-the-Home deployments) are continuously developing to keep pace with market demand for higher capacity and better quality of service. These developments have not changed how we operate, they have just shifted our focus – but that is always shifting as we learn of new technologies and assess their potential impact in the future.

Are there any challenges/benefits to patent licensing and or portfolio monetisation unique to Ireland?

Ireland has created a very business-friendly environment and has a depth of technical expertise that is hard to match – it is one of the most innovative countries in the world. Irish companies benefit from numerous favourable tax treaties with various countries around the world and these benefit by being members of the European Union in a myriad of ways, including, for example, lower court fees in European courts and closer access to patent sales in Europe. On the challenging side, it is difficult to find people with the depth of knowledge of patents, their licensing and litigation in Ireland – something that would change if the country would consider a central division of the UPC. Individual taxes are also very high, which makes it difficult for companies to incentivise people not to emigrate.

Although they generate a significant volume of patents, most universities and non-profits do not have the same success through their patents as for-profit entities. Why do you think that is and what are some steps they could take to change that?

Universities and non-profits think and operate differently to for-profit entities, for example, university personnel receive grant money to write about their work and inventions for publication in journals, whereas companies keep invention disclosure statements under lock and key. Universities seek to patent inventions from individual researchers across multiple disciplines whereas companies are patenting the work of teams of employees in areas relevant to the business. The disparate nature of patents filed by universities rarely yields a cohesive portfolio that offers strength in numbers; and the need for universities and non-profits to preserve relationships for donation/support means they do not have the same freedom to assert and monetise. Universities and non-profits should consider term licences, which would allow them to increase rates over time or sell without a long-term encumbrance. Working with NPEs would also be beneficial – they could be a consistent outlet, provide a source of revenue that can feed back to the inventors so they can continue their work, and avoids conflicts with the university donors.

We have heard a lot about waiving patent rights in recent years, in part due to covid. Do you think that it is an appropriate strategy and, if not, why not?

In the context of covid, I understand what they were trying to accomplish, however misguided, but waiving patent rights or compulsory licensing is not the way to achieve it. Neither option would have decreased the time it takes to source materials, manufacture a product, secure regulatory approvals, or resulted in lower pricing. They would have detrimentally impacted future research and innovation by undermining the investment necessary for both. The cost of research and innovation, irrespective of the technology sector, is exceedingly expensive and a period of exclusivity in the market is necessary to recoup these investment costs. Patent protection affords that exclusivity in a way that benefits the investor and the public alike – those funding the research can yield a return through licensing patents and the public (including other researchers) benefit from the knowledge that is released in the form of a patent; both feeding into a cycle that furthers research to the benefit of everyone.

There has been much discussion around the Unified Patent Court system and Ireland, what do you think the issue is and what should Ireland be doing?

Ireland ranks in the top 20 of the most innovative countries in the world; practically every major multinational in the world has an office here. It ranks 10th in the world in terms of European patent applications per capita and number one in the world in terms of IP payments as a percentage of total trade. Yet, the Irish Patent Office does not feature in the top 10 in Europe and the Irish courts are never called upon to adjudicate precedential issues – both of these are losses for Ireland, in terms of human capital, knowledge and economically. Following Brexit, Ireland should have immediately sought to replace the United Kingdom as the third seat of the UPC’s central division, which will cater to pharmaceuticals and medical devices, among other technologies. With every major pharmaceutical and medical device company having operations in Ireland, having a central division here would have afforded these companies, and others, the opportunity to conveniently adjudicate their issues close to home and in English. Further, it could have boosted traffic through the Irish Patent Office and would have led to innumerable jobs in the sector. The court would also have benefitted from the depth and breadth of technical expertise that exists in Ireland, the legal market would have benefitted from the increased demand and the Exchequer would have benefitted – the UPC was expected to boost the UK economy by up to £2 billion. It is not too late for Ireland, but time is running out on this opportunity.