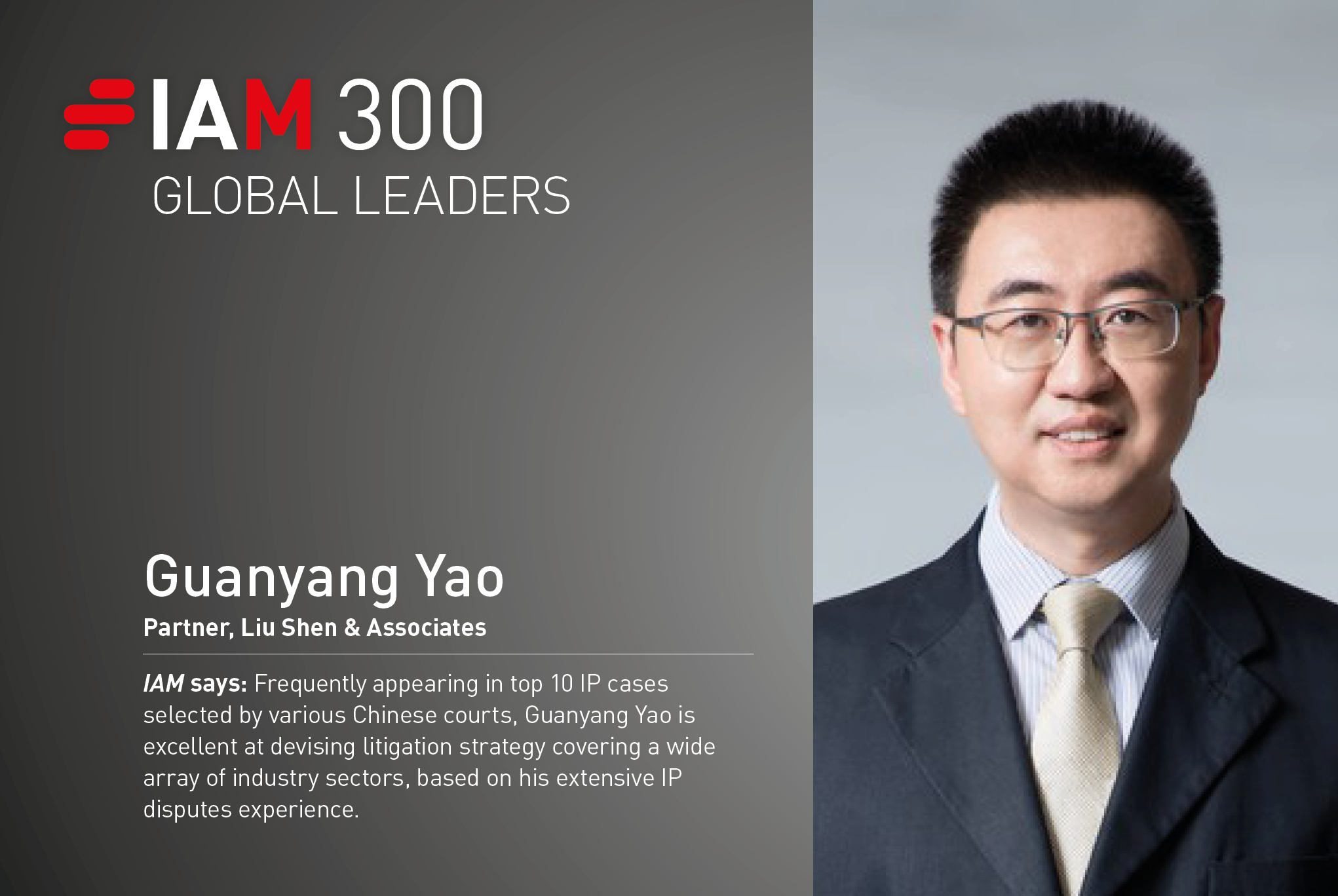 How do you expect the Chinese patent licensing landscape to evolve in the next five years?

I expect that the Chinese patent licensing market will gradually grow. The current policy is to encourage patent licensing; enterprises can monetise their patents so as to do more than merely cover the annual costs. The fourth round of amendments to the Patent Law incorporated an open licence system, which is clearly an encouraging signal for patentees to carry out more licensing. On the other hand, the punitive damages system has been established in the patent litigation field and the amount of damages being awarded by the courts is increasing. For strong sellers, it is possible that damages could reach as much as Rmb1 million – far higher than was the case five years ago. From the market level, we can see that implementers make up the majority of players, especially in the vehicle space. Patent pools such as Avanci have entered China to collect patent licensing fees, which is sure to make enterprises more knowledgeable about patent licensing matters.

How do you build trust and engagement with clients?

Trust and engagement with clients is based on our professional and quality IP legal services, our practical advice – which is consistent with circumstances in China – our experience handling complicated and difficult IP cases and the fact that we obtain results favourable to our clients’ interests. We create opportunities to communicate with clients via telephone conferences and emails during cases to guarantee that we are on the same page regarding both technical and legal issues. We believe that it is incredibly important to build trust with clients. After we have prepared thoroughly by working together with our clients, they always show that they trust us fully to handle the whole case, especially when being faced with surprising challenges.

My way of thinking and my personal character is quite well fitted for this career. I have a background in science and I am qualified as both an attorney at law and as a patent attorney. I am self-motivated and quite enjoy the problem-solving process. As well as this, I am patient and capable of analysing legal issues from multiple perspectives. When I am dealing with high-profile cases, I feel that the future of the enterprise rests on my shoulders, so there is no room for mistakes: I am aware of my responsibility to pursue the best interests for the enterprise. I know that the IP system in China is in the process of improving, so when legal challenges arise, it should be up to our generation to find solutions for such issues, figuring out the difficulties in the current legal framework to pave the road for the future. All of these factors probably contribute to why I pursued my career in intellectual property, but I also think that working to facilitate progress for the protection of innovations in society is the ultimate goal for my career.

What common mistakes do you see foreign rights holders make when enforcing their patents in China – and how can they avoid them?

I believe the most common mistake foreign rights holders make when enforcing patents is underestimating the complex nature of evidence collection with regard to accused infringing products and damages. Unlike the United States, there is no discovery procedure in the Chinese judicial system. The plaintiff must collect evidence, mostly on their own. When the accused infringing products are readily available on the market, evidence collection is relatively easy. However, when suspect products are only available through business-to-business channels, evidence collection becomes far more difficult since there is no publicly available way to purchase such products. One way around this is to hire a private investigator to check a firm’s background and make some test purchases. When it comes to evidence for damages, the plaintiff should collect as much public sales information as possible, so that a logical estimate of damages can be reached. Generally, there are not many public channels that provide such information and sometimes estimates are based on wild guesswork rather than evidence.

How would you characterise the SEP environment in China right now?

SEP cases have drawn lots of attention from both industry and the judicial system. In the second half of 2020, there were several rulings on SEP cases in China, including anti-suit injunction rulings in Huawei v Conversant, Xiaomi v IDC and Samsung v Ericsson, and jurisdiction opposition rulings in ZTE v Conversant and OPPO v Sharp. All of the parties involved are active players in the telecommunications SEP field. One of the reasons why SEP litigation has emerged so strongly is due to the great developments of companies in this sector in China. Between the 2G and 5G eras, Chinese enterprises have gone from owning fewer than 10% to over 30% of all declared SEPs. China also has an enormous market for manufacturing and selling phones, which is attracting SEP implementers. So far, Chinese courts are holding a relatively balanced and tolerant line. Courts do not intend to force those implementers to withdraw from the market – rather, their intention is to help move licensing negotiations forward. This was the philosophy behind the FRAND injunction in Huawei v Samsung, which was proved to facilitate the final settlement. As parallel SEP litigation becomes popular worldwide, more and more legal issues arise, including anti-suit injunctions and jurisdiction opposition. Another hot issue for SEP cases is how to decide global royalty rates. The recent Supreme Court decision issued in September 2021 for the SEP royalty rate disputes between Sharp and Oppo confirmed that Chinese courts have the authority to decide global royalty rates. The arrival of Avanci in China has also brought forward the issue of paying SEP licensing fees to car manufacturers in China.

Which of your deals has been the most memorable and why?

I believe it is the Qualcomm v Apple patent infringement litigation and invalidation cases, which took place between 2018 and 2019 in China. My team represented Qualcomm, handling more than 10 patent invalidation cases and several patent infringement litigation cases, which required a great deal of effort. The techniques involved were related to various fields, including software authentication, phone booting configuration, audio and video processing and so on. Sometimes, infringement court hearings lasted for up to three days, continuing after the consecutive oral hearings with the Patent Office on the validity side. After all of this hard work, we won most of the patent invalidation cases and helped reach the final settlement. The infringement cases have now been ranked among the top 10 cases in the Guangzhou IP Court.

What are some of the biggest challenges that clients face in the mechanical engineering, vehicle engineering and medical devices fields?

For the mechanical engineering field, the biggest challenge is the difficulty in collecting evidence. Unlike phones, which can be easily handled with one hand, mechanical engineering equipment cannot be carried or even operated by one person, which can cause great challenges for claim mapping for the infringement. For the vehicle engineering space, the biggest challenges are the SEP licensing matters evolving in China. Unlike the telecommunications field, professionals in vehicle engineering are unfamiliar with FRAND rules and SEP negotiations and are unsure about future technical developments. Therefore, they are generally reluctant to participate in licensing negotiations. For the medical devices field, there are also significant challenges in collecting evidence, since medical devices are controlled by and generally sold to hospitals and cannot usually be purchased via public commercial channels. This makes it difficult for plaintiffs to obtain accused infringing products as evidence to establish a case and compare patent claims.

Can you tell us the key steps of an effective monetisation process?

The first step should be checking and confirming the validity of the IP rights at issue. After this, there should be a process to evaluate the rights by a third party. Finding the client is also crucial; therefore, eyes should be kept on the business of implementers in the industry or the company being sued. Rounds of negotiations and the drafting of contracts based on the specific circumstances are also crucial.

How do you expect the IP transactions space to evolve as more and more industries continue to be affected by technological convergence?

This is similar to the first question in that the IP system is promoting IP transactions. I believe that enterprises are becoming more aware of intellectual property and that more and more organisations will realise that they should pay for the value of it.

Guanyang Yao specialises in providing patent law and trade secrets related legal services. Based on his extensive experience in patent prosecution and litigation, he has a deep understanding of the spirit of the Chinese patent legal system and has the expertise to design overall litigation strategies. As the leading attorney, Mr Yao has handled patent disputes for various international and domestic enterprises. Multiple cases handled by Mr Yao are selected as annual IP representative cases.