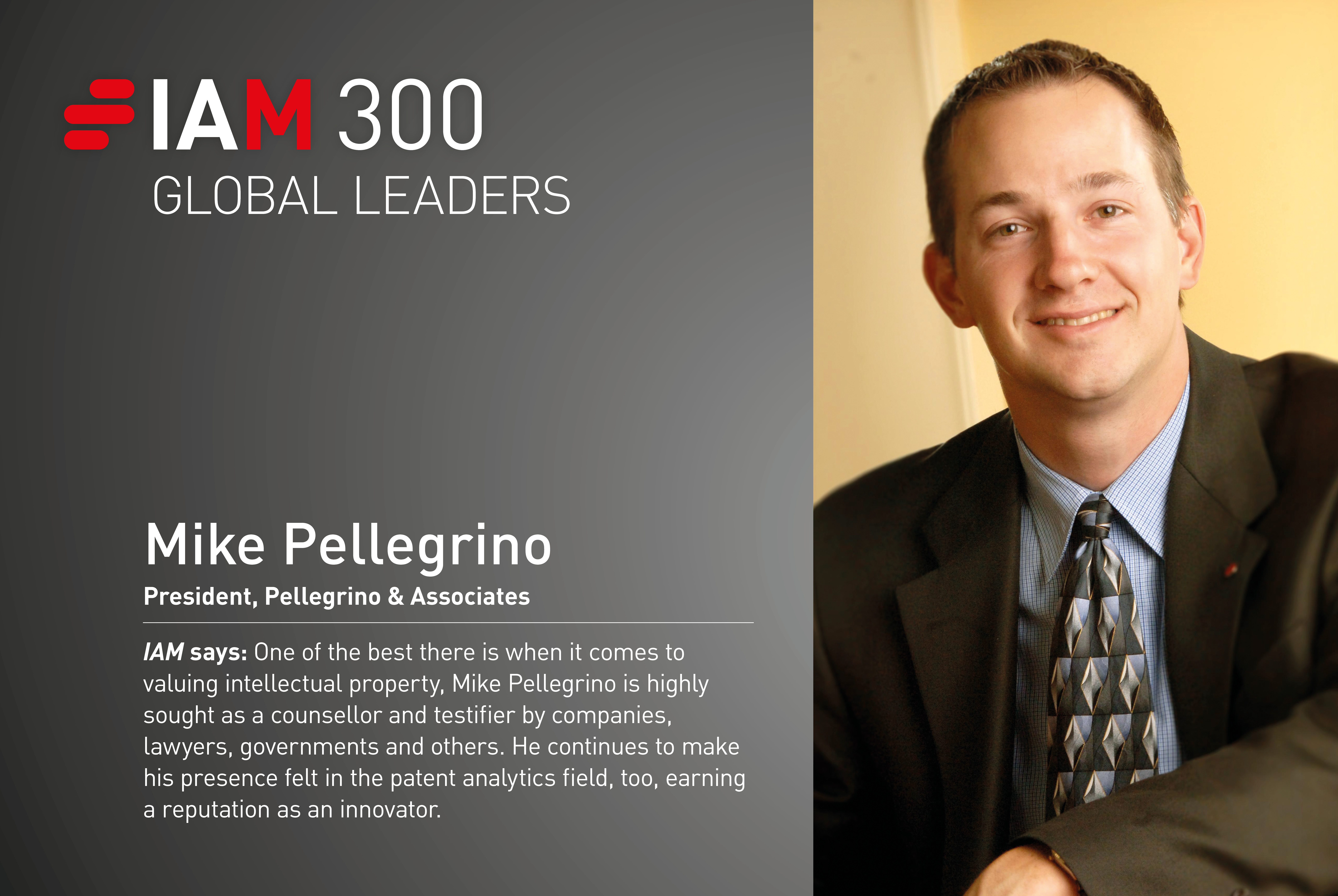 What led you to establish a firm specialising in IP valuation – and what advice would you give to someone considering starting their own firm?

My entry into IP valuation was accidental. I formed Pellegrino & Associates originally to restructure the reporting of large capital equipment that contained a lot of embedded application software for personal property tax purposes. However, during the course of my work in that field, I saw an unmet market need for IP valuation services with a greater degree of rigour.

What are some of the key skills necessary for someone working in the IP strategy space?

We have a regimented and strict approach to valuation development and reporting that differs remarkably from competing firms. It is difficult for industry veterans to accept our approach and we do not usually make lateral hires for that reason. What we seek in new candidates are those who are fluent with finance, economic and scientific fundamentals, creativity, the ability to write and speak well and humility.

How do you manage expectations and maintain close working relationships with clients when the stakes are so high?

Innovation taxes an inventor emotionally. A particular innovation might represent the innovator’s life’s work. I find myself sometimes in the uncomfortable position of telling clients that they have ‘ugly babies’ and have also had to inform clients that innovations with hundreds of millions of invested dollars are relatively worthless. That news is sometimes hard to accept, and it is equally difficult to deliver. Open and frequent client communication and data-driven analysis support are crucial to maintaining effective working relationships in such scenarios.

What do you expect to be the next big tech sectors to take off – and how can companies and investors ready themselves?

Many groundbreaking technologies do not generate high values because the disruptive value is too large, the pathway to profitability is too long and the risk profile is too high. Rather, incremental innovation generates greater economic value, as the time to market is shorter, the risk profile is lower and the market is already established. For example, the creation of the blue LED enabled wholesale destruction of the incandescent bulb market, reduced the energy consumption associated with lighting by magnificent amounts and resulted in the 2014 Nobel Prize in Physics. However, had I valued the blue LED in 1993, it would have been worth relatively little, as it took two decades for the technology to catch on and replace the lighting standard for more than 100 years at scale. There are only a few ways to create real economic value, and they generally fall into four categories. First, increase top-line revenues to increase profits. Second, increase market share, lowering effective amortised costs to service clients and increasing profits. Third, reduce operational costs, thus increasing profits. And lastly, reduce execution risk, increasing the value of future operational cash flows. Valuable innovations create economic value in at least one of these dimensions. Very valuable innovations create economic value in two or more. If one thinks about the next big incremental innovations, they will often involve life-continuing or life-sustaining inventions. These are generally the inventive areas that generate the highest marginal returns, whether it is a pharmaceutical composition of matter, a diagnostic device, a coating, a food additive, a seed technology and so on.

What do you consider to be the key features of a watertight IP strategy?

In my view, a watertight IP strategy requires several components – and many do not tie to perfunctory measures like patent counts. The first is patient capital. While there are exceptions, many large public companies that I work with cannot make significant investments into IP estates on a relative basis, because the payouts take place over a longer period of time than what shareholders allow. This is evident when one compares the relative rates of R&D spend as a percentage of overall revenue to smaller companies. The second component is risk appetite. IP investment involves risk, yet company incentives do not often reward innovation risk for fear of entrenched profit cannibalisation. Kodak, which invented the digital camera, is a relevant example. The third component is economic rationality. I have witnessed many companies, especially large companies, make sub-optimal decisions regarding IP issues - especially with respect to IP litigation. I see a lot of confidential settlement documents. Many a head would likely roll if activist shareholders ever knew the amount of economic inefficiency in IP litigation decisions perpetuated by large companies.

How do you expect patent analytics tools to change the ways of working for rightsholders and investors, particularly in the valuation space?

I do not expect patent analytics tools to change how investors or valuation professionals act substantially at all. The USPTO issued a request for comment in 2017 on this topic, but nothing ever came from it. Patent analytics is an area of the IP landscape that has had numerous fits and starts over the years. Such tools have been around for two decades and have had little appreciable impact in the valuation. Cost is one component but working knowledge of patent analytics is the much bigger hurdle. There is a steep learning curve associated with patent analytics. I am an accidental owner of a patent analytics system that I developed from scratch, which comprises what I believe is the largest aggregation of the USPTO’s patent datasets outside of the USPTO. I developed the system out of necessity over the course of more than 10 years to drive actionable insights in IP strategy and valuation engagements because current patent analytics were, and continue to be, woefully inadequate to meet the needs for actionable, auditable, directionally correct insights. Compared to the actual investments I have made, I could have bought subscriptions to any purported market-leading tool for decades, yet such tools are largely unhelpful in my experience and at least seven to 10 years behind what I have created and use on a daily basis. For example, I automated many patent-due-diligence procedures that complete in less than a second and with the click of a button that would take attorneys days or weeks to complete.

Unlike many in the IP valuation profession, I never apprenticed with any of the major IP valuation employers. I am based in the Midwest and do not have an Ivy League education pedigree often found in my profession. Early on, when on the phone with someone working on Wall Street, I could almost see their eyes roll when they learned I lived in the Midwest. The perception was that, if I were here and without pedigree, that I could not be any good. The antidote I found to be effective was to offer a better value to the market, both in the work product I offered and in the defence of that work product. To do that, my firm continually studies competitors with remarkable vigour. We analyse competitive market offerings, and read and analyse how competitors testify in court. We learn from the deficiencies in their work products, and catalogue the shifting positions that they take from matter to matter based on who hires them. We track every time that a court rules their testimony to be inadmissible. From all of this information, we adapt accordingly. The endgame is to offer better value in the market. This does not always mean that my firm is the lowest cost; however, when it comes to value creation, the goal is to offer the client the best value possible. The market’s reflection of that value is proven.

You have been instrumental in helping to change several laws regarding software valuation for tax reporting purposes, as well as how patent-derived income is taxed. What other legislative changes would you like to see in future?

I would prefer to see the restoration of injunctive relief for patents in the United States. The movement of the United States to a compulsory licensing regime has distorted the value outcomes of IP licensing negotiations, which paradoxically hurt the shareholders of recalcitrant licensees, who overpay in court because of sub-optimal decision making on the grounds of gross pre-litigation miscalculations.

What impact do you expect AI to have on the wider IP ecosystem?

AI is the shiny new object in the wider IP ecosystem; however, its overall utility depends on its deployment. The nearest analogy I can point to are patent-strength indices that came out about 15 years ago and forward-citation analysis rooted in academic research of the 1980s. The problem is that AI use is only as good as the endpoints and the training data. This is where its utility fades quickly. In my experience, developers train AI systems to incorrect endpoints and lack substantive data. As a result, the AI models misdirect focus and resource allocations in sub-optimal ways. One company I am aware of developed an AI system for patent maintenance renewal payments that caused them to abandon seminal inventions because their AI training system lacked relevant data. There is also a serious gap when it comes to rigorous back-testing of AI outcomes. A good statistical model does not mean that AI results are necessarily meaningful. I have been working with AI systems in the IP space for more than 10 years, and I developed AI-driven automated valuation algorithms more than a decade ago supported by exceptional statistical models. However, back testing the results demonstrated that the predictive models were useless. Commercial tools bear similarly bad outcomes.

As well as your work in IP valuation, you are also a renowned educator. Why is teaching in this field so important to you?

I invest more than 300 hours and tens of thousands of dollars per year in unpaid writing and speaking efforts to drive the profession forward. I also chair the Licensing Executive Society’s committee developing an American National Standards Institute standard for IP valuation. The goal is to unlock the economic potential of IP assets. IP investment is the most democratising financial instrument I have ever studied. It can lift people from modest backgrounds into the economic stratosphere. Yet IP assets lack standalone standardised investment vehicles. I believe that the lack of consistency in the valuation of assets is a significant contributor to this outcome. I was a professional software engineer before entering the valuation profession. When I did so, I was appalled at the relative lack of consistency in valuation outcomes. I was also shocked at the relative lack of rigour undertaken in IP valuations - especially in due diligence procedures and reliance on rules of thumb. One would never see such wide variance in valuation outcomes and lack of rigour in engineering. I came to understand that the IP valuation profession was and continues to be very dogmatic, in part because of the lack of rigour, which plagues both the market and court system. Currently, I have to create a five-year writing and speaking tour just so that I can bring proven and credible analysis methods that were developed 70 years ago into a US courtroom. Much of my writing and speaking seeks to bring rigour and consistency to the valuation of IP assets, unlocking their economic potential more than what history would indicate is possible.

Mike Pellegrino is the founder and president of Pellegrino & Associates, LLC. He has significant experience of valuing patents and other forms of intellectual property, establishing royalty rates and evaluating businesses. Mr Pellegrino is the author of first and second editions of BVR’s Guide to Intellectual Property Valuation. His educational background includes a bachelor’s degree in computer science from Indiana Institute of Technology and a master’s degree in business administration from Ball State University.