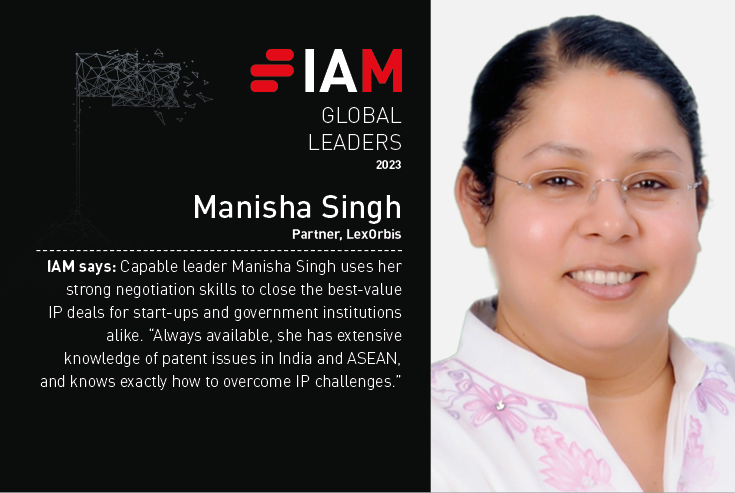 What aspect of your work do you enjoy the most?

I am a passionate advocate for diversity and inclusion. It gives me immense pleasure to guide and help my team grow professionally and personally.

What led you to found your own firm and what advice do you have for anyone considering doing the same?

I honoured the opportunities and explored all the possibilities, weighed the pros and cons, and zeroed in on starting my own IP-focused law firm with my partners. I wanted to tap the potential of the creativity and innovation offered by the Indian market in the international IP realm. The general practice firm in which I was working was not open to the idea of having a specialised IP practice, complete with technical experts, and was ignoring the changes that were happening in the Indian IP realm. This led me to set up a boutique law firm early in my career, which could appropriately match the international standards. Today, LexOrbis is internationally recognised for its contribution in this sector, with clientele ranging from government organisations to Fortune 500 companies. The only advice I tend to share is to persevere through dreadful times:  be optimistic. We should stay focused and humble – have a vision, strong ethics and a business plan. Lastly, an unfettered client commitment and ability to think outside the box are also essential.

The current legal services landscape is competitive and high-quality legal work is considered a minimum. How do you add value for clients in such an environment?

The firm’s key practice areas include end-to-end IP services starting from ideation to monetisation, and including procurement, protection, maintenance and enforcement of all forms of IP rights and assets, including:

Over the last few decades, inventors, brands and business owners have become more conscious of the value of intellectual property. We strive to create more awareness about the importance of IP protection through events, webinars and publications aimed at highlighting the misuse of intellectual property and the challenges faced by inventors, creators and brand owners if their rights are not protected. We also assist our clients in identifying potential threats to their intellectual property through comprehensive research. We strive to understand the business needs so that we can adapt advice to the realities of our clients.

Which recent decisions or legislative developments have had the biggest impact on IP strategy in India in the past few years?

The Indian government is making many efforts to improve the country’s IP regime. The most significant changes include;

Has the pandemic had any permanent changes on the future direction of the patents space in India?

The pandemic has had a domino effect in shaking up traditional ways of working and replacing them with out-of-the-box, more efficient practices. The legal professional took a hit when the working environment completely changed. I believe that the pandemic has had a mixed effect on the patent space. Companies are hiring talent irrespective of their location, with the remote work culture helping many people to focus on their career from the comfort of home. This futuristic approach is creating a better legal ecosystem and ushering in an influx of innovation and creativity. India stands on the global stage and it is important to let go of age-old practices.

What key skills does a world-class patent litigator need to succeed before Indian courts?

IP law is quite complex so to be a world class patent litigator one should have in-depth understanding, communication skills and conflict resolution and always be working towards finding a perfect solution with the client.

Which of your cases has been your most memorable to date and why?

All the cases that I have handle have a special place in my heart, however, below are the most significant and memorable ones.

Appeal in a suit for infringement of a patent for Indoco Remedies Limited – this case involved a direct oral anti-coagulant drug, a blood thinner known as Apixaban, which recently earned a place in the spotlight on being found to be critical for the treatment of covid patients. Apixaban was earlier covered in a Markush structure - a manner of claiming that lists alternative species or elements or groups that can be selected as part of the claimed invention – claimed in Indian Patent 243917, which expired on 17 December 2019. The patentee, Bristol-Myers Squibb Holdings Ireland Unlimited Company, had also obtained a patent for the specific compound of Apixaban in Indian Patent 247381, which was filed after the first application with Markush structure.

When the Indian generic drug manufacturer Indoco Remedies Limited launched its generic Apixaban drug after the first patent’s expiry, the patentee filed suit before High Court of Delhi alleging infringement of its second patent. An injunction was granted in which Indoco was restrained from manufacturing and selling generic Apixaban and an appeal has been preferred against that order. What makes this case stand out is that there are several Indian manufacturers that commenced manufacturing Apixaban in view of expiry of the first patent 243917 and all but one had injunctions filed against them. Those manufacturers have also filed appeals and all these appeals are being heard together by a division bench of the Delhi High Court.

The subject matter of the appeals, which is generic Apixaban, makes the case significant in view of the covid-19 situation as there is now an increased need for anticoagulants for the treatment or prevention of blood clotting. The appeals involve important questions on public interest and double patenting (ie, protecting the same invention in two patents to prolong the monopoly). It also questions the impact of statements made by a patentee in the statements of working filed on Form 27 in respect of use/working of an invention that has been granted a patent.

Litigation-suit for infringement of patents for Nuziveedu Seeds Limited - one of the country’s most-talked about cases, this not only encompassed issues relating to contract, arbitration, patents, trademarks but even newer legislations such as the Plant Variety and Farmers’ Rights Act. The dispute arose between Monsanto Technology LLC and Nuziveedu Seeds Limited (NSL) in 2016, when Monsanto issued proceedings in the Delhi High Court for infringement of its Indian patent 214436 for a nucleotide acid sequence containing the gene bacillus thuringiensis. LexOrbis represented NSL and other defendants in this case and in the appeals that followed before the division bench of the Delhi High Court and the Supreme Court of India. NSL filed a counter-claim challenging the validity of the patent. Monsanto claimed that nucleic acid sequence is a micro-organism and hence patentable under the act. NSL claimed that it was only after insertion into the seed that it produced the desired result and thus, it is an essential biological process or plant component, which is unpatentable. The trial court took a *prima facie* view that the patent was valid but no injunction was allowed against NSL. On appeal, the division bench revoked the plaintiffs’ patent on the ground that the invention claimed by it was not patentable subject matter under Section 3(j) of the Patents Act, 1970, which excludes from patentability “plants and animals in whole or any part thereof other than micro-organisms but including seeds, varieties and species and essentially biological processes for production or propagation of plants and animals”. The division bench opined that the product of Monsanto was more suitably protected under the Plant Variety and Farmers’ Rights Act. Upon further appeal before the Supreme Court, the case was remanded back for trial. This settlement has been instrumental in ensuring that around half a decade of controversy over Bt Cotton has been laid to rest.

Trademark rectification/cancellation proceedings before the IP Appellate Board (IPAB) for Bentley Motors Ltd – Bentley Motors Ltd filed a cancellation action before the IPAB on 3 November 2017 against the registration of the identical trademark BENTLEY in Class 14 under registration number 1441845 in the name of Aucera SA. Aucera SA was noted to be a bad-faith applicant in numerous other jurisdictions where it had applied for/obtained registration of the identical mark BENTLEY against our client’s prior rights and interests over the same. This ensued in the filing of purportedly false and fabricated documents of use by Aucera SA in its counter-statement, which was comprehensively rebutted with the help of testimonial evidence. Our reply to the counter-statement and note of arguments and detailed written submissions stated that there was no justification given by Aucera SA for the adoption of the mark BENTLEY, which is the surname of our client’s founder, and that this had been pointed out in certain judgment(s) in our favour in other jurisdictions. The BENTLEY mark is so well known that even foreign courts have held as such, and these observations have also been encapsulated in judgments in our favour in other jurisdictions such as South Korea.

The board was convinced and in its remark acknowledged that the BENTLEY mark is indeed well known. We also explained and asserted that our client is the prior and exclusive user, both worldwide and with respect to India, of the BENTLEY mark in relation to the concerned goods and that there is no genuine/authentic use on the part of the respondent and that the same should be considered as non-use of the mark in the eyes of law. Bearing the dishonest intentions of the respondent in mind, the impugned mark must be removed and expunged from the Register of Trademarks. The order was reserved and pronounced on 11 January 2021 by the board (Order 6/2021). Its operative part reads: “To maintain the Purity of the Register of Trade Marks, the trademark bearing registration number 1441845 is accordingly ordered to be removed from the Register forthwith. The Respondent No.2 (i.e., Registrar of Trade Marks) shall remove the said entry immediately from the records of the Register of Trade Marks.”

Suit for infringement of Patent for S3G Technology LLC - the suit was filed for infringement of the plaintiff’s Indian patent; it had acquired the rights in the suit patent from the predecessor-in-interest of the defendants in the suit. From the issue of infringement, there was also fraud raised by S3G against SourceTrace. S3G alleged that even after taking a huge amount of consideration for transferring the patent rights, SourceTrace continued to use the same patent to compete against S3G, which amounted to fraud. This case also involves an important and interesting question on assignor’s estoppel, that is whether SourceTrace has any standing to question the validity of this patent if it claimed its validity when it was the patent’s previous owner. SourceTrace could not first file an application for a patent, sell that patent for money and then question the patent’s validity.

Manisha Singh is known and respected for her deep expertise in prosecution and enforcement, and for strategising and managing global patents, trademarks, and designs portfolios of large global and domestic companies. She is also known for her sharp litigation and negotiation skills for both IP and non-IP litigations and dispute resolution. Ms Singh is an active member of many international IP associations and regularly authors articles and commentaries for some of the top IP publications.