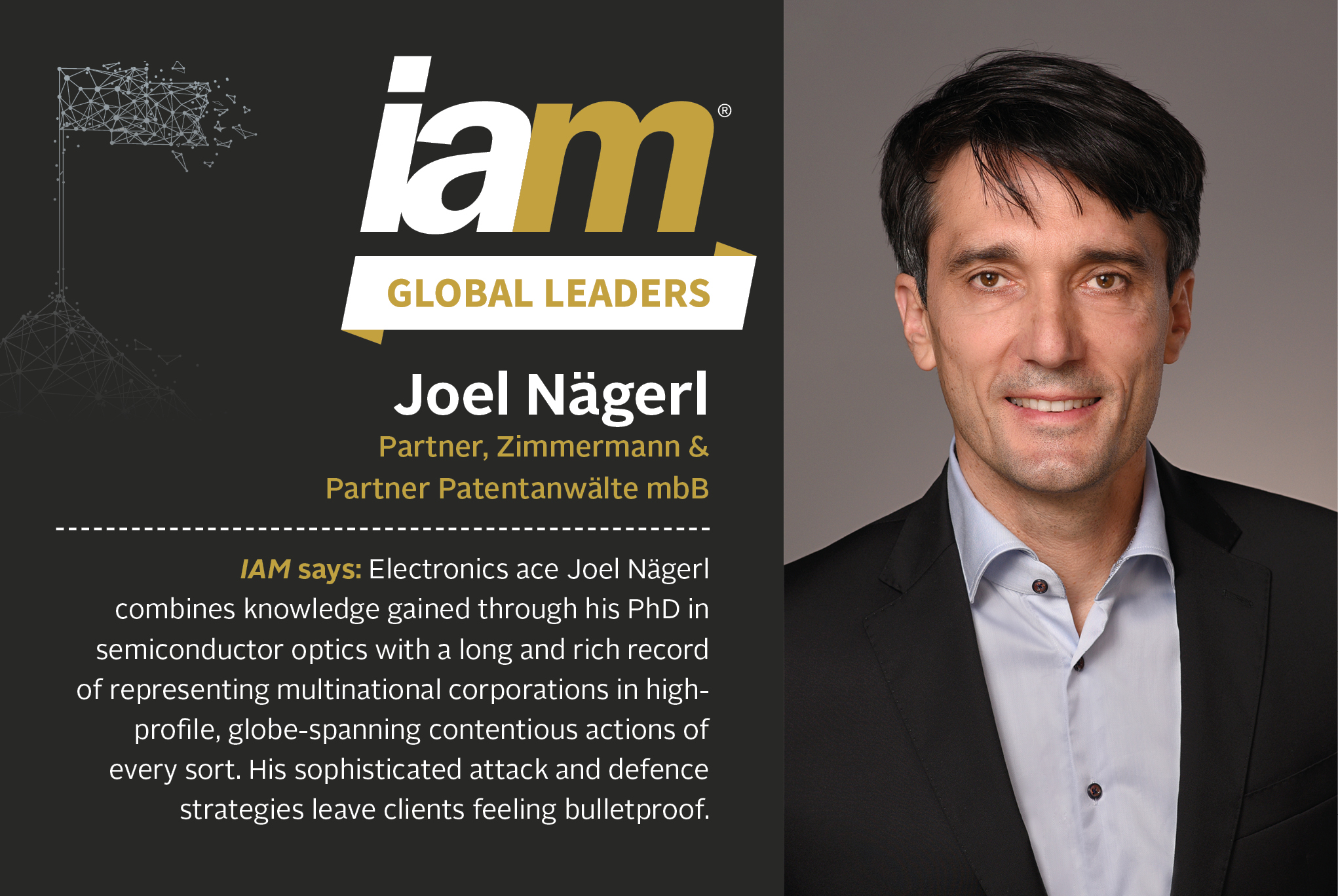 Can you tell us about the biggest daily challenge you face in your professional life – and how you overcome it?

The litigation cases I work on take place in a highly competitive setting and often involve personal pressure on me and my team due to strict deadlines, the complexity of the matter and the high values at stake. Learning to handle this pressure has had a great influence on our overall performance. Further, it is necessary for achieving exceptional success rates in patent litigation, in particular in the context of high-profile litigation cases, which are typically carried out across several jurisdictions and involve large international groups of attorneys and technicians. Information management has been crucial to this process and involves striking the right balance between a free flow and filtering/channelling information. In my experience, establishing a free flow of information within my team has been incredibly helpful in fostering a fact-centred, open-minded, cooperative and benevolent atmosphere for discussion, with mutual appreciation of personal efforts and constructive competition. This requires everybody to take a professional, circumspect approach that allows conflicting views on technical, legal and strategic aspects to be discussed with the sole aim of advancing the matter. When it comes to establishing a final position with a view on tight deadlines I endeavour to filter this information exchange and communicate the results with the other international groups involved for feedback. Therefore, the team becomes more than the sum of its parts when it comes to tackling complex matters in a short timeframe, while also alleviating the pressure on individuals.

What are the biggest challenges facing your clients at present?

The way I see it, Big Tech firms take IP matters very seriously and manage them on a highly professional level. They generally respect the IP rights of others and are willing to take a licence under FRAND terms. But when negotiations fail, disputes related to IP rights become globalised, with most involving litigations in the United States, at least one Asian country, and Germany. While one would think that German litigation has a smaller impact in these scenarios, the speed of German infringement proceedings can tip the scales before larger jurisdictions rule on any of the cases. Two traditional concerns of Big Tech firms about German litigations were automatic injunctions and the risk caused by the separation of infringement and nullity proceedings (ie, bifurcation). New legislation in Germany may make injunctions less automatic, and express efforts by German nullity and infringement courts to avoid conflicting decisions have softened the concerns about bifurcation. However, actions brought by NPEs are still a challenge for practising companies. NPEs’ will to conduct serious and fair negotiations with regard to licensing conditions can sometimes be less pronounced, particularly since there is no leverage against them from their own IP rights due to their non-participation in the product market.

Looking back, what are some of the most significant changes that you have seen in German patent litigation over the course of your career?

Despite bifurcation, I consider nullity proceedings as a defence of an assumed infringer and therefore as part of German patent litigation in a wider sense. The biggest change here has been the reformation of nullity appeal proceedings, which has led to a drastic shortening of the appeal stage before the Federal Court of Justice. While I believe that German patent litigation has developed consistently over the past two decades, I expect further significant changes in the future. The jurisprudence of the upcoming Unified Patent Court (UPC), which will harmonise patent litigation across Europe, will have an effect on German patent litigation as well. The advent of AI may even challenge some fundamental legal concepts established in patent law, such as the role of the skilled person, the content of disclosure and the approach to the assessment of novelty and inventive step, as well as questions surrounding inventorship.

What are the most important considerations for tech companies engaged in patent infringement proceedings before the upcoming UPC?

Tech companies are looking forward to seeing the UPC in operation, as it may make litigation across Europe much more effective. Consideration should be given to the choice of local or regional divisions, if any, taking into account their potentially different approaches due to their national backgrounds until the Court of Appeal has established sufficient case law to bring in line the interpretation and application of the UPC agreement. Tech companies will also closely observe which requirements the UPC imposes on parties’ duties during the negotiation of SEP-related patent portfolios. In particular, they will be watching out for decisions imposing high burdens on meeting FRAND-related obligations, as well as the imbalance caused by the fact that a single infringement verdict related to one patent in a large patent pool can mean an injunction for an entire product, which regularly incorporates many other technologies.

How has your management style changed over your professional life – particularly given the past year of remote working?

As compared to the beginning of my professional career, the globalisation of high-profile litigation cases has increased, as has the number of cases in which I participate and the size of my litigation team. While management in my earlier days mostly meant good case management, it now also involves team management and information management, the importance of which I have already stressed.

My style of team and information management have been particularly affected by remote working during covid-19. Video conferencing can replace some aspects of personal meetings and works well in some situations (eg, for presentations by one speaker and small group discussions). But when large international groups meet remotely, non-verbal means of human communication are not available to coordinate the conversation. In order to keep the focus on the key issues and to optimise resource efficiency, I refrained from including all of my team members in long video conferences, while making sure that the relevant results were accurately reported to the non-participants later. This cut some of the free flow of information within my team, but seemed preferable under the circumstances.

If you could make one change to the German patent system what would it be – and how likely do you think it is to take place?

The German patent system is appreciated across the world for its high degree of legal certainty and predictability, relatively low costs and comparatively quick infringement procedures. However, so far the discrepancy between the short duration of first-instance infringement proceedings and the relatively long duration of first-instance nullity proceedings has threatened to thwart some of these advantages. If a plaintiff obtains a verdict of infringement at the first instance, this leaves the defendant in a vulnerable position even though nullity may be a promising defence. Conversely, if infringement proceedings are stayed, the attack of the plaintiff may lose all impact even though their chances to defend the patent in a form in which it is still infringed may be good. If I could make one change to the German patent system I would remove this discrepancy by speeding up first-instance nullity proceedings. There has been legislation in Germany in this direction recently, but it remains to be seen whether this is sufficient. Further, I am particularly concerned about both the number and working conditions of the judges. The quality of the individual judges specialised in patent matters at German courts is remarkable. They are well trained, sharp minded, profoundly experienced and highly motivated. Accordingly, the working conditions of judges at the courts must be attractive and supportive, which includes employing enough of them, spending generous resources on training young judges, expanding the administrative body, providing a modern digital infrastructure at the courts and paying judges adequately in relation to what such qualified personnel could earn in private industry.

Existing patent pools have proven to be effective in the past, generally for the benefit of patent contributors, licensees and, ultimately, consumers. However, there are cases where excessively high royalties are enforced through agreements between patent holders or where several different patent pools cover the same technology – both these scenarios lead to inadequate royalties and the risk that corresponding technologies might not be implemented. To better assess a patentee’s contribution to a patent pool and determine an adequate licence fee, the creation of a classification that clearly identifies the relevant portions in the standard and shows them in relation to individual patents would be useful.

What are the most common mistakes that non-European companies tend to make before the EPO?

The patent strategy of non-European companies is often related to global patent prosecution and sometimes highly streamlined, so it is natural that it does not address the needs of all patent offices, and not even all of the so-called IP5 (ie, the EPO, the USPTO, the Japan Patent Office, the China National IP Administration and the Korean Patent Office). The EPO has strong opinions on some legal issues and takes a different approach to the other IP5 office with regard to the following:

These legal issues, which the EPO perceives as deficiencies, cause a significant portion of the prosecution costs and lead to the rejection of patent applications. At least some of these issues are avoidable in the drafting stage of a patent application, even in a highly streamlined, global patent prosecution scenario. For instance, avoiding intermediate generalisations would merely require adding further information to the disclosure of the patent application, which should not cause problems in other jurisdictions.

What emerging trends or technologies are having the biggest influence on patent activity among your clients?

The biggest trends and emerging technologies in the field of tech companies appear to be cloud computing and AI-based technologies, but future-generation applications may involve quantum information processing as well. Patent activity in these areas is increasing significantly. My clients will need to prepare for litigation in these fields. Further, the complexity of the technologies will bring about more challenges, particularly for those with a legal background.

Joel Nägerl has a PhD in physics and is a German and European patent attorney. His main practice area is patent litigation, where he advises and represents large multinationals in numerous high-profile international disputes covering the telecoms, electrical engineering, semiconductor technology and optics fields. Dr Nägerl also serves as an appointed court expert at the Dusseldorf Higher Regional Court and co-authored the Handbook on Patent Law.