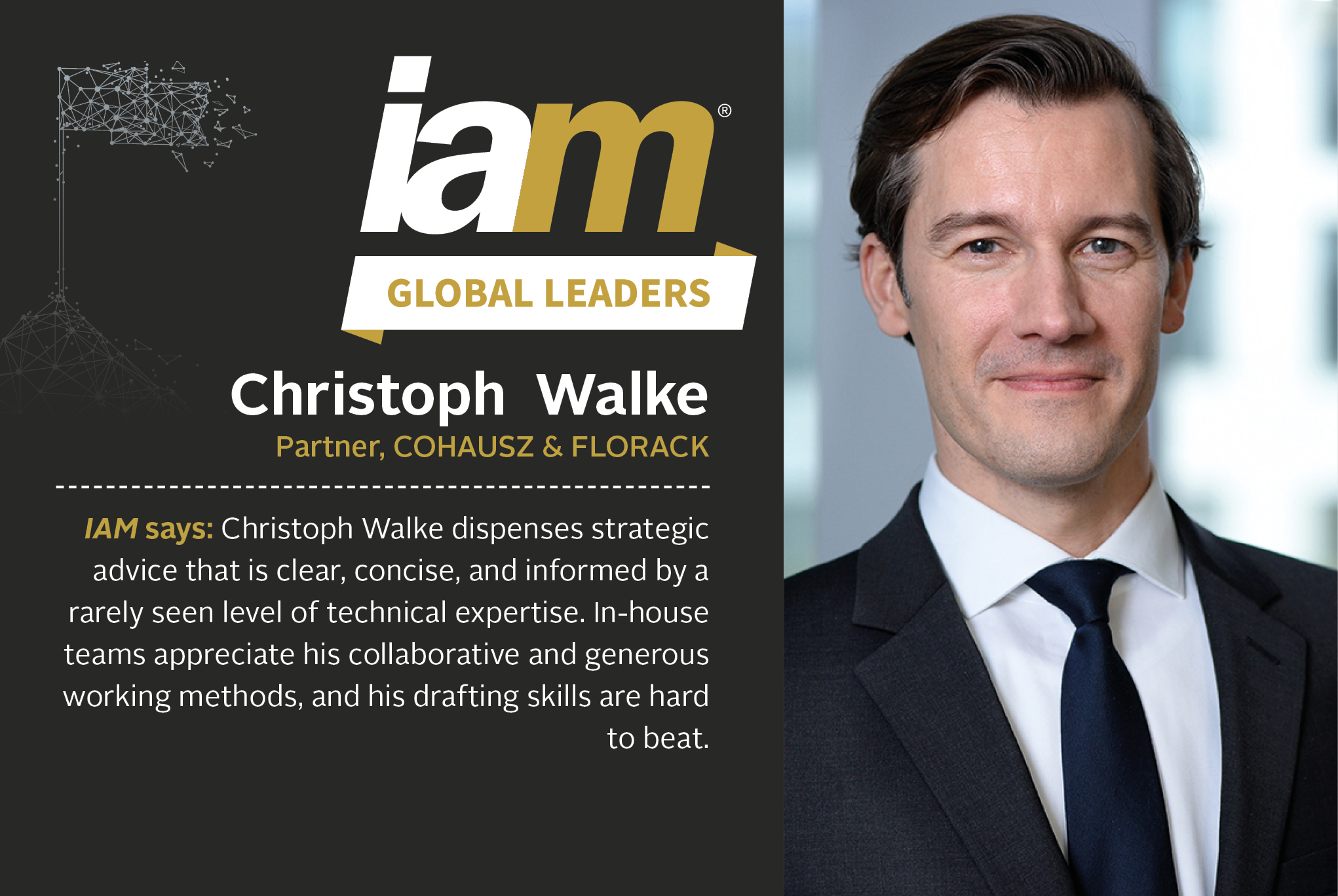 A major and continuing problem in our profession is finding candidates who are both excellent engineers and talented lawyers to satisfy our continuing need to enlarge our team and tackle the (fortunately) ever-growing workload. To this end, more than 15 years ago we began to intensify our HR marketing with a strong focus on technical universities. At the same time we also professionalised our in-house training for patent attorney candidates – we educate them for three years before they sit their patent attorney exams. These measures have allowed us to achieve steady growth with high-performing patent attorneys.

How do you measure the success of a truly global IP strategy?

An IP strategy is successful on a global scale if the same scope of protection can be achieved in countries where competitors and/or their customers or – in the case of SEPs – potential licensees and/or their customers are located and where patents are actually enforceable. A prerequisite for this is a per-country analysis of the efficiency and how welcoming the respective legal system is to innovation (in particular with respect to timing, cost, risk, the threshold for inventive step and, for SEPs, the approach taken to determine whether a licence offer is considered FRAND). When prosecuting such global patent families, a centralised approach should be pursued where the in-house patent department or law firm controls the worldwide prosecution of a patent family and ensures that all prior art unveiled during prosecution in any country is taken into account for all patent family members for which it constitutes prior art by appropriately delimiting the claims.

What are the most common mistakes that non-European companies tend to make before the EPO?

One unfortunately non-healable mistake that we have seen in the context of business-related applications at the EPO is where the original application documents for business-related inventions lack a detailed description of the invention’s actual implementation, which significantly raises the probability that the application will be refused by the EPO. Another mistake that is frequently made by US applicants when prosecuting applications at the EPO is to apply US-style arguments towards non-obviousness, such as the teaching-suggestion-motivation test, rather than the appropriate European problem-solution-approach. This is particularly in the context of mixed-type inventions with both technical and non-technical features, where only the technical features contribute to the inventive step, while the non-technical features can at least be used to define the context in the form of a requirement specification.

In past SEP litigation, the European Commission was rather hesitant to directly interfere with the ongoing disputes. This may now change with the European Commission’s initiative Intellectual Property – New Framework for SEPs, which was announced on 13 July 2021. The aim of this is to create a fair and balanced licensing framework, combining legislative and non-legislative action. It is thus to be expected that some kind of regulation for the enforcement and pricing of SEPs will be developed and, to the extent that this is achieved by a EU directive, this will then need to be transformed into national law and then followed by German courts.

The German Federal Constitutional Court dismissed the complaints against the UPC agreement on 9 July 2021. There are therefore no further obstacles for the UPC from a German perspective, since its ratification in Germany is now merely a formality. It is expected that the UPC will be able to start its test operation as early as the end of 2022 or the beginning of 2023 – exciting times lie ahead for us European IP practitioners!

Christoph Walke is a patent attorney and partner at COHAUSZ & FLORACK. He specialises in information and communications technology, audio, video and data processing, software and cryptography. He has particular expertise in infringement and invalidity proceedings and global-scale patent prosecution, primarily concerning technically complex and standard-related inventions. Further, Dr Walke has extensive experience supporting companies in their expansion of existing business fields and acquisition of new business units through freedom to-operate searches and due-diligence evaluations.