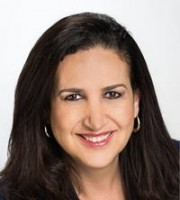 Taraneh Maghamé is a highly regarded IP business leader, widely recognised for her unique combination of strategic corporate IP licensing know-how, as well as her high-level government relations and policy expertise. She has successfully closed complex IP business deals around the globe. Ms Maghamé was recently appointed to the European Commission’s Expert Group on Licensing and Valuation of Standard Essential Patents.

As senior director of wireless programmes and corporate development at Via Licensing Corporation, a subsidiary of US audio pioneer Dolby Laboratories, Ms Maghamé develops and manages strategic multi-party licensing programmes in wireless and cellular technologies, including the LTE/LTE-Advanced and W-CDMA patent pools. In 2018 she launched Via’s highly-anticipated multi-generation wireless patent licensing programme for internet-connected devices such as smartphones, tablets and connected cars.

Before joining Via in 2017, Ms Maghamé served as senior counsel in Apple’s IP and licensing group, focusing on patent licensing strategy and standards. Her role included representing Apple in global standards-related organisations.

Before Apple, Ms Maghamé was acting general counsel and vice president for M&A, patent policy and government relations at Tessera Technologies. In this high-profile policy role, she helped to found – and was spokesperson for – the Innovation Alliance, an organisation representing patent holders’ interests before Congress. She has testified before the Senate Committee on the Judiciary and the Federal Trade Commission regarding patent matters.

Ms Maghamé has served as senior IP counsel at Hewlett-Packard and Compaq Computer Corporation and has been a member of the distinguished IP law firms Brobeck, Phleger & Harrison and Perkins Coie, specialising in IP litigation, licensing and counselling.

Ms Maghamé has played a leadership role in professional organisations such as the Association of Corporate Counsel, the Intellectual Property Owners Association, the Federal Circuit Bar Association and California Women Lawyers. She frequently speaks on IP topics before business and professional audiences. She is a graduate of Georgetown University Law Centre and is admitted to practise in California and Washington State, as well as before the USPTO.

An “extraordinarily effective IP strategist and leader”, Taraneh Maghamé is “always at the centre of business breakthroughs in intellectual property”. “Clearly among the best in the field, she has decades of IP licensing experience and has orchestrated many large global deals.”