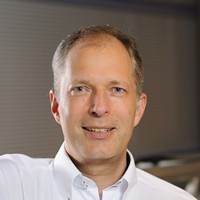 Stefan Geyersberger is deputy division director of the audio and media technologies division (comprising more than 200 engineers and scientists) of Fraunhofer Institute for Integrated Circuits IIS. He is also head of patents and licensing for Fraunhofer IIS’s audio patent portfolio which comprises more than 9,000 granted patents (as of early 2020) for open standard-based technologies – such as MPEG-4 AAC, MPEG-H and EVS (3GPP Enhanced Voice Services) – which are currently implemented in more than 10 billion devices worldwide.

Mr Geyersberger has more than 20 years’ experience in various business and licensing positions in the audio and media technologies field at Fraunhofer IIS. He joined Fraunhofer IIS in 1996 as a digital signal processor (DSP) engineer, undertaking various real-time MP3 implementations on several DSP platforms. In 1998 he was promoted to manage the DSP engineering team and was awarded the Joseph von Fraunhofer prize in 1999 for his contribution to WorldSpace – the world’s first satellite-based digital radio broadcasting system.

In 2000 Mr Geyersberger changed his focus to business development for software and IP rights licensing for audio and media technologies, such as MP3 and MPEG-4 AAC. Mr Geyersberger’s first substantial commercial achievement at Fraunhofer IIS was his contribution to the setting up and launch of the MPEG-4 AAC patent pool in 2002, which is administered by VIA Licensing and has generated substantial IP revenues for Fraunhofer IIS’s continuing industrial research programmes. Since then, he has set up and managed various other patent pools for open standard-based technologies. During the past few years, he has developed various strategies to create, acquire, license and enforce IP rights for both protecting key technologies and creating significant R&D reinvestment revenue streams.

Before joining Fraunhofer IIS, Mr Geyersberger developed the SCHOEPS Spherical Microphone KFM-6, the worldwide reference for binaural live recordings. He has degrees in both music studies and electrical engineering and is a regular author on IP-related policy issues.