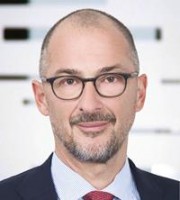 Attorney at law Rainer Böhm is a partner at the German IP law firm Eisenführ Speiser in Hamburg.

Following his degree studies in jurisprudence at the universities of Hamburg and Munich, he was admitted to the Bar in 1995 and joined Eisenführ Speiser in 1997. He has been a partner since 2001.

Mr Böhm is a certified IP attorney and a regular lecturer at the Hamburg School of Business Administration and the American Bar Association. He is active in all fields relating to the protection of intellectual property, with a focus on litigation and arbitration.

Mr Böhm’s activities in the patent law field mainly pertain to international litigations, especially in the United States and India, and to the coordination of litigations in multiple jurisdictions. Among his recent successes are several proceedings on behalf of ENERCON (one of the world’s leading companies in the wind-energy industry) against competitors Siemens (a successful opposition decided after 15 years by the German Federal Court of Justice) and Vestas. A decision in favour of ENERCON was also reached in a comprehensive case before the UK High Court against its former subsidiary Wind World India (formerly ENERCON India). Mr Böhm has been involved in numerous parallel oppositions and nullity proceedings before the EPO and the Federal Patent Court.

Mr Böhm also focuses on licensing law, including antitrust law, as well as trademark law and copyright law. He successfully represented Swiss chocolate manufacturer Lindt in its famous dispute with German confectionary producer Haribo over the alleged infringement of Haribo’s GOLD BEAR trademark. A well-known client in the copyright field is Tecnolumen, the world’s leading manufacturer of products designed during the Bauhaus era and owner of the exclusive licence to manufacture re-editions of the famous Wagenfeld lamp, also known as Bauhaus lamp. After years of litigation against advertising and distribution of the lamp by an unauthorised online trader, Tecnolumen finally won before the German Federal Court of Justice, the landmark decision strengthening the copyright of artists and designers.

Rainer Böhm protects and enforces his clients’ rights in a uniquely creative and highly effective manner. He demonstrates impeccable attention to detail and an exceptional intellect – and is an absolute pleasure to collaborate with.