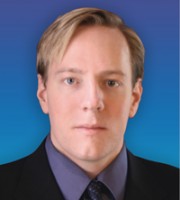 Christopher Beckman is the co-founder of ScoreIP, a first-in-class innovation and IP consultancy based on invention for hire and big data.  Rather than simply advise on IP strategy for existing client concepts, ScoreIP dives in with your development team, helping to create first-in-class products backed by sound intellectual property at the outset.

Mr Beckman’s new practice has helped a wide range of established industry players hit ‘home runs’ with intellectual property, including none other than Major League Baseball.  But most of his work has been with nascent venture-backed start-ups, such as Lunya, 14Bis and Kangaroo Security. Mr Beckman is is also well versed in IP monetisation, licensing and brokerage, and has sold and licensed several of inventions (including several of his own) to industry.

Mr Beckman was also recently named the chief innovation officer (CIO) of one of his consulting clients, Mymee, Inc.  Mymee is a digital health company headquartered in New York City backed by Johnson & Johnson’s Jlabs innovation programme.  Prior to joining Mymee as CIO, Chris developed several digital health inventions and patents, now heavily cited by industry leaders.  Mr Beckman is a prolific inventor, with several industry-leading patents to his credit, including rapidly exchanged fluid (bubble) batteries for electric vehicles, the All-In toothbrush, a new type of oral hygiene device that simultaneously brushes and flosses all of your teeth simultaneously.

Mr Beckman graduated with honours from the University of Connecticut School of Law.  Among other academic distinctions, he made Law Review and the Moot Court Board, and received the CALI Excellence for the Future award.

Prior to his time at ScoreIP, Mr Beckman was an IP attorney at leading IP law firm Fitzpatrick, Cella, Harper & Scinto (now merged with Venable LLP) and a partner at Gray PLLC (a firm formed within Interplay Ventures), where he worked with several large electronics, finance and pharmaceutical companies.

Christopher Beckman is exceptionally well-rounded being, among other things, an inventor, a patent analytics trailblazer and experienced attorney. His corporate strategy and business-minded IP advice is like gold dust for emerging companies.