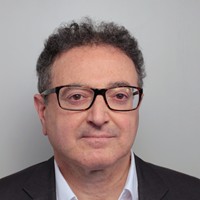 At Technicolor he developed and carried out major licensing programmes, including patent pools. He was also involved in standardisation bodies such as the DVD Forum, where he was the executive committee’s Technicolor representative since the outset and was instrumental in the inclusion of the Technicolor Film Grain Technology into the standard. He has been involved in various Technicolor acquisitions, divestments, joint ventures, strategic alliances and business development initiatives.

Before joining Technicolor, he was a senior manager at Accenture where he advised various companies on strategic services, productivity and quality improvement, controlling and IT.

Mr Chaouat has contributed to various books on intellectual property, innovation and licensing and has authored many articles on these subjects. He recently coordinated the drafting of the LESI Licensing Briefing released in May 2020. He is also a frequent speaker on IP and licensing matters all over the world.

Mr Chaouat has two MScs from Ecole des Mines de Nancy and Ecole Nationale du Petrole et des Moteurs, and a PhD in economics. He has also participated in several education programmes on intellectual property and innovation at Stanford University, among others. He is a past president of the Licensing Executives Society (LES) France, vice chair of the LES International Valuation Committee and past chair of other various LES International committees.