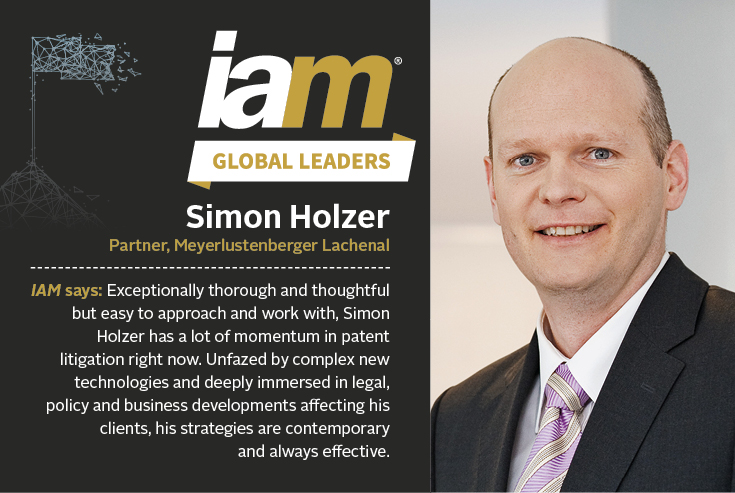 When I was a younger lawyer, it was already clear that intellectual property would become increasingly important. From the very beginning, I was interested in the many overlaps between intellectual property and other areas of law, such as patent law, pharmaceutical regulatory law, SEPs and competition law. In addition, working as an IP lawyer gives you insight into many different industries (eg, pharmaceuticals, medical technologies, computer sciences, electronics, mobile communications technology and material processing), which is challenging but incredibly exciting at the same time.

Switzerland is a particularly important jurisdiction for life sciences IP owners – what are the main issues that they are facing currently?

Like any other industry, the life sciences industry has high hopes for the future application of AI. The extent to which AI, training data or processes and products resulting from AI can be protected by IP rights is a very interesting issue to be solved.

You are a part-time judge at the Swiss Federal Patent Court. What does that entail and how do you fit it around your other responsibilities?

The Swiss system with part-time patent judges ensures that, although Switzerland is a small jurisdiction, highly specialised judges oversee patent cases. As a part-time judge, I am not normally involved in case management and join cases at a late stage. That is why the time budget for those cases can be kept within a manageable range. When working as a part-time judge, it is important to clear possible conflicts of interest effectively and early to ensure that the constitutional right to an independent judge and the detailed rules of the Swiss Federal Patent Court on the independence of judges are maintained. This has worked well in the past and does not give rise to any more problems than in arbitration proceedings, where it is also normal for a lawyer in one case to represent a party in an arbitral matter and act as an arbitrator in the next case.

Under what circumstances would you recommend clients seek to solve a dispute via arbitration?

If a dispute is to be handled completely confidentially and the parties can agree on arbitration proceedings, the parties should seek arbitration. Although not all court documents are published in Switzerland, the judgments and hearings are public. The courts can order appropriate measures to protect trade secrets, but it is difficult to say in advance what such measures will look like.

If you could make one change to the Swiss patent regime, what would it be and why?

Simon Holzer is a partner in Meyerlustenberger Lachenal’s IP team and head of the firm’s patent and life sciences practice group. He is also a part-time judge at the Swiss Federal Patent Court. Dr Holzer has special expertise in the pharmaceutical and telecoms sectors. He has been praised by clients and peers as “one of the top for patent litigation work”. Clients highlight his “in-depth technical understanding” and describe him as an “excellent litigator”.