Filing trends at LG Electronics highlight an impressive rise that has made it the fifth largest owner of US patent grants. That is no mean feat; 20 years ago the company filed a mere 210 applications. Between 2001 and 2020 – a window shorter than thfie lifespan of a single patent – LG’s annual output of applications has increased by a factor of 21.

LG is part of a conglomerate – a fact that is reflected in the diverse list of technologies making up the biggest chunks of its portfolio. From wireless communications to air conditioning, semiconductors to laundry cleaning, LG’s technology holdings underpin a vast range of household products.

Historical data shows two key periods in which LG’s filings jumped significantly to reach a new level. The first was in 2010, which saw a 31% single-year increase. The second was between 2013 and 2015, when applications rose from 2,958 to 3,833.

LG’s business mix looks quite different now than it did in those days.

In 2009, as its patenting prepared to take off, televisions and mobile handsets were LG’s top revenue generators, but it was mobile phones that delivered the bulk of operating profits. The company’s share price reached a height in August 2009 that it would not match again until January 2021. According to previous IAM reporting, the company embarked on a seven-year period of patenting – beginning in 2010 – in which it was the top filer of 4G SEPs for six years in a row.

Fast forward to 2020, and while TV sales remain vital to LG, it is the home appliances segment that delivers the biggest revenues and the biggest share of profits. In other words, the company’s sizable patent holdings in refrigeration, HVAC and other white goods-related areas are nothing to sneeze at.

Smartphones are now a loss-making enterprise for LG. In Q1 2021, executives confirmed that the company is mulling strategic options for the handset unit, including closure or a potential sale. This could have implications for its existing portfolio and would affect the direction of future research efforts.

The good news is that LG’s mobile R&D has delivered one of the market’s biggest portfolios of wireless communications patents, including 4G and 5G SEPs. Data show that five of the top 10 CPC sub-classes in the LG portfolio fall under Class H04, electronic communications. Moreover, these connectivity technologies can be applied to plenty of LG products regardless of what happens to its handset division.

With or without smartphones, the company says that its main strategy going ahead is to “apply core technologies such as AI, 5G, IoT and mobility in all business areas”. The opportunities to do this in televisions and home appliances are obvious.

The same is true for electric vehicle components – a business that LG has high hopes for. Electric vehicle propulsion and other directly related fields appear further down the company’s patent class list, accounting for a couple of hundred grants each. At the end of 2020, LG announced a big joint venture in the space with Magna International, a Canadian mobility tech company that appears at number 216 on the list, with over 2,000 related patents.

It will be interesting to see how, if at all, LG’s portfolio shifts as the company pursues its next act. The South Korean giant is hoping to prove that you can hardly go wrong by making big investments in general purpose technologies like connectivity. 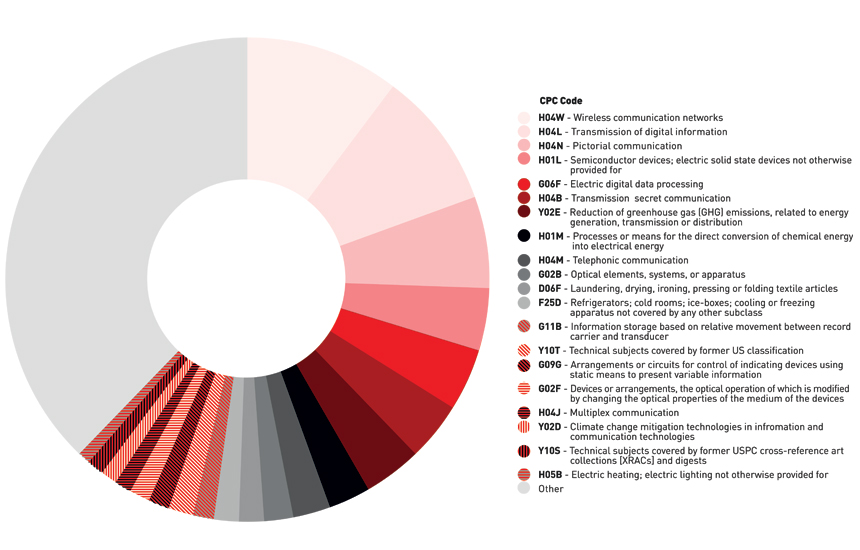 Special Report 2021 Q1: On the shoulders of giants