For decades, Europe has awaited a single EU patent and patent court system. In early 2016 this finally seemed in reach, with the unitary patent and Unified Patent Court (UPC) package on the home stretch and set to become operative in 2017. However, with the surprising Brexit vote on June 23 2016, the fate of the system became uncertain. One year on, as the dust has settled, it seems that the United Kingdom is still supporting the new court system and preparing for ratification. The UPC’s operational start is now expected in 2018. Therefore, it may be beneficial to recall how the new court is structured.

The UPC will be a court common to the contracting EU member states and will thus be part of their judicial system. It will be established by the UPC Agreement, which was signed in February 2013 by 25 states (all EU member states except Spain, Poland and Croatia). The UPC will have exclusive competence for cases regarding infringement and revocation in respect of not only the new European patents with unitary effect (ie, ‘unitary patents’), but also the existing and future ‘traditional’ European patents (although exceptions will apply during the transition period). The UPC’s rulings will have unitary effect in the territory of those contracting states that have ratified the UPC Agreement. As such, the UPC is aiming to address the problems associated with litigating bundles of European patents on a national basis by establishing a specialised patent court with exclusive jurisdiction over litigation relating to traditional European patents and European unitary patents.

However, the UPC will have no jurisdiction over national patents or utility models.

Start of UPC – impact of Brexit

To enter into effect, the UPC Agreement must be ratified by at least 13 contracting states, including three member states with the highest number of European patent filings in 2012 (ie, France, Germany and the United Kingdom). Thus far, 14 states have ratified the agreement – including France, but notably not Germany or the United Kingdom.

The United Kingdom was close to ratifying the UPC Agreement, and with Germany expected to ratify shortly after UK ratification, the UPC was originally projected to become operational by the beginning of 2017.

However, after the Brexit referendum on June 23 2016, UK ratification became uncertain in view of the declared Brexit goal to escape the jurisdiction of the European Court of Justice (ECJ). But, in a surprising move, on November 28 2016 the UK government announced that it would ratify the UPC Agreement despite its plans to leave the European Union. Nonetheless, ratification was again delayed due to the snap UK general election in June 2017.

Besides the ratification issue, it is unclear whether the United Kingdom can remain part of the unitary patent/UPC system after its departure from the European Union, as the UPC Agreement is open only to EU member states. Hence, depending on UK ratification, the UPC may start early with the United Kingdom – at least until its departure from the European Union – or only after Brexit and without it (see Figure 1). 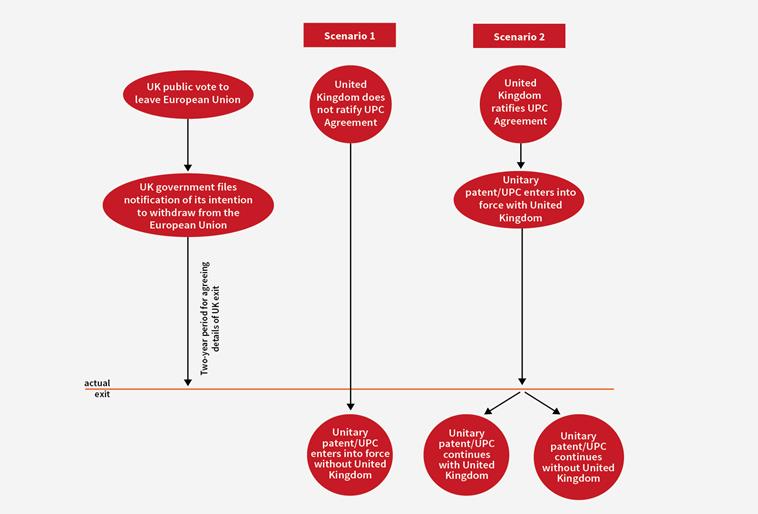 Germany’s ratification process is now also on hold, on the request of the German Federal Constitutional Court. However, this is expected to be merely a formal delay, rather than a real show-stopper for German ratification.

The UPC is now expected to start at some point in 2018.

An illustrative chart of the basic court structure and panel composition is contained in Figure 2.

The UPC will consist of a court of first instance, a court of appeal and a registry.

The seat of the court of appeal will be in Luxembourg.

The role of the ECJ – the highest court in matters of EU law – remains unclear. Although it is clear that the court of first instance and the court of appeal may refer questions to the ECJ, it is unclear whether this includes questions on patent infringement or solely questions on the interpretation of EU law.

Figure 2. An illustrative chart of the basic court structure and panel composition 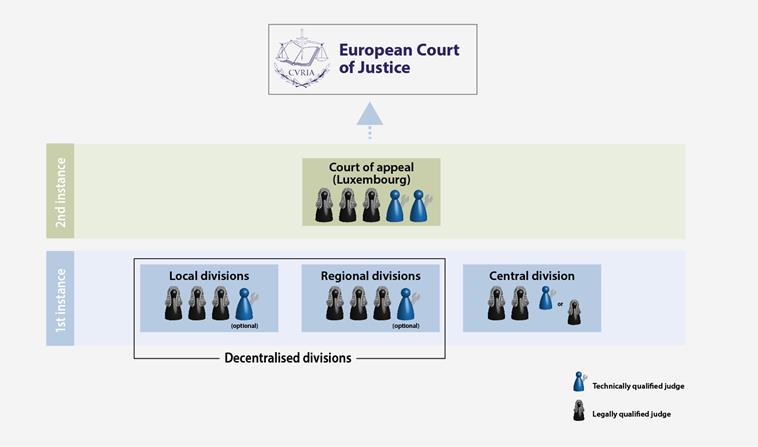 UPC panels will have both legally and technically qualified judges from all over Europe.

The language of proceedings in the central division will be the language in which the patent was granted.

Second instance: The language of proceedings before the court of appeal will remain the same as in first-instance proceedings, unless the parties agree to use the language of the granted patent.

The UPC will have jurisdiction over not only the new unitary patents, but also traditional European patents in the respective contracting states of the UPC Agreement. Basically, the central division will have jurisdiction to hear independent actions of revocation nullity, whereas patent infringement actions will be heard before the local or regional divisions of the contracting state in which the infringement occurred or where the defendant is domiciled.

The second option is referred to as ‘bifurcating’ the questions of infringement and validity (also known as ‘double track’ proceedings) and is seen as critical, as it may result in a pan-European injunction for a patent which is later found invalid. As Germany has an established tradition of bifurcation, practitioners in other countries fear that the German local divisions will often bifurcate and hence be especially attractive to the main users of the system. However, according to indications from German judges, this fear is overrated – at least for the German local divisions.

The proposed court fees will be made up of a fixed fee, combined with a value-based fee when the value of a case is above the set ceiling of €500,000. The value-based fees rise based on the estimated value of the case put forward by the claimant in the statement of claim.

A successful party is entitled to recover reasonable and proportionate costs. However, recoverable costs also have a ceiling depending on the value of the case, with a maximum award of recoverable costs set at €2 million for a case valued at more than €50 million. However, the court has some discretion to lower or raise the ceiling.

The proposed complex rules of procedure are designed to ensure that a first-instance decision is rendered after a one-day oral hearing within one year. To this end, similar to the German litigation system, the focus is on written procedures and the proceedings use a frontloading system (ie, the parties set out their full case in writing as early as possible in the proceedings, with new facts and evidence usually precluded on appeal). However, there is flexibility for complex actions which may require more time and procedural steps. This ambitious timeframe will be supported by setting up a new electronic system for UPC case management (which is a formidable challenge in itself).

Figure 3 shows a basic outline of the three main stages of proceedings before the court of first instance.

Figure 3. The three main stages of proceedings before the court of first instance

In the first stage, two briefs from each side are exchanged in electronic form, unless this is not possible for some reason, within a strict timeframe. The stage is conducted by the judge rapporteur, who may allow the timeframe to be extended.

This stage is still conducted by the judge rapporteur. It is designed to prepare the case comprehensively for the oral hearing and to clarify the parties’ positions with respect to the main contested issues. To this end, the judge rapporteur may hold an interim conference, which may take place via telephone or video.

While the unitary patent is effectively just another kind of European patent, the UPC Agreement breaks new ground in establishing the first pan-European patent court system. As such, it is hardly surprising that the UPC is the result of political compromises and, during the transition period, will add a further layer of complexity to the existing European patent system.

The UPC is a combination of established national litigation systems, which provides for centralised and decentralised courts with multinational panels composed of legally and technically qualified judges applying a balanced language regime. The procedural law which the courts will apply combines well-established traditions of different national jurisdictions and basically provides for a frontloaded written procedure which should render a first-instance decision within one year. The strict timeframe will be a challenge for the case management of judges, attorneys and parties alike.

The court fees provide for a rather inexpensive system, as long as the value of the case ranges low, and will ultimately offer cheaper pan-European litigation. However, depending on the forum and the language of proceedings, substantive translation costs may be incurred, not to speak of the uncertainty generally involved with translations.

The quality of the judges will be a key factor in the UPC’s success or failure. While there is a training centre for the UPC in Budapest, experience is indispensable. It is unlikely that a high number of experienced judges who speak several languages will be available when the UPC opens for business. Moreover, mass opt-outs may deprive the UPC of cases, so that the freshly trained judges will need longer to gain sufficient experience.

There is a real risk of mass opt-outs, as owners of high-quality patents or owners of patents which do not need wide territorial coverage will most probably choose not to risk being subject to a single-action revocation, but wait until the UPC has been sufficiently tested. It remains to be seen what effect such a slow start will have on this long-awaited forum. 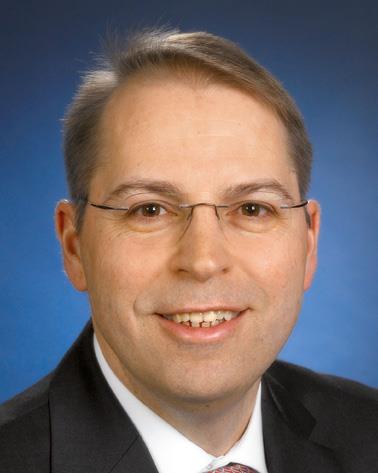 Rainer Kuhnen is partner with the renowned IP law firm KUHNEN & WACKER. As a German and European patent attorney, he specialises in patent prosecution and opposition as well as nullity and infringement proceedings, especially in the fields of electrical engineering, electronics and physics. Mr Kuhnen holds a master’s in electrical engineering from the Technical University of Munich and an LLM in European IP law.

Patents in Europe 2018/19: Helping business compete in the global economy