Raytheon case study – from defence to a digital future

Raytheon Technologies is not only a giant in the aerospace and defence sector, but a behemoth that dominates the patent world.

Before the merger between United Technologies and the legacy Raytheon, United sat just inside the top 50 of the largest US patent owners. With a little over 12,700 grants, it was neatly placed between auto supplier Robert Bosch and Dell. Raytheon, in contrast, did not even make the top 100, although it was hardly a patent novice. In 2018 one of its engineers received patent number 10 million from the USPTO.

In the lead up to the 2020 merger, United sold off its non-aerospace brands, including Otis Elevator Company and Carrier Corporation, with the combined company taking the Raytheon name. The deal also created the second largest aerospace and defence business behind Boeing.

Post-merger, the company now sits just outside the top 10, sandwiched between Apple and General Electric with 21,445 grants.

The business also boasts a strong pipeline of applications, with 5,300 in total, including 2,438 filed in 2020. If a significant chunk of those turn into granted assets, then the company could well break into the top 10 of the largest US patent owners in the next few years.

Unsurprisingly, a scan of how Raytheon’s portfolio breaks down by CPC code shows a heavy concentration in the aerospace and defence fields, including in areas such as jet propulsion and gas turbines. However, elsewhere, its IP arsenal also includes assets in fields such as semiconductors and electric digital processing.

Therefore, while the legacy of United Technologies may have been firmly rooted in mechanical engineering, like so many businesses across a range of industries, the modern-day Raytheon’s future is being tied more and more to the digital realm. 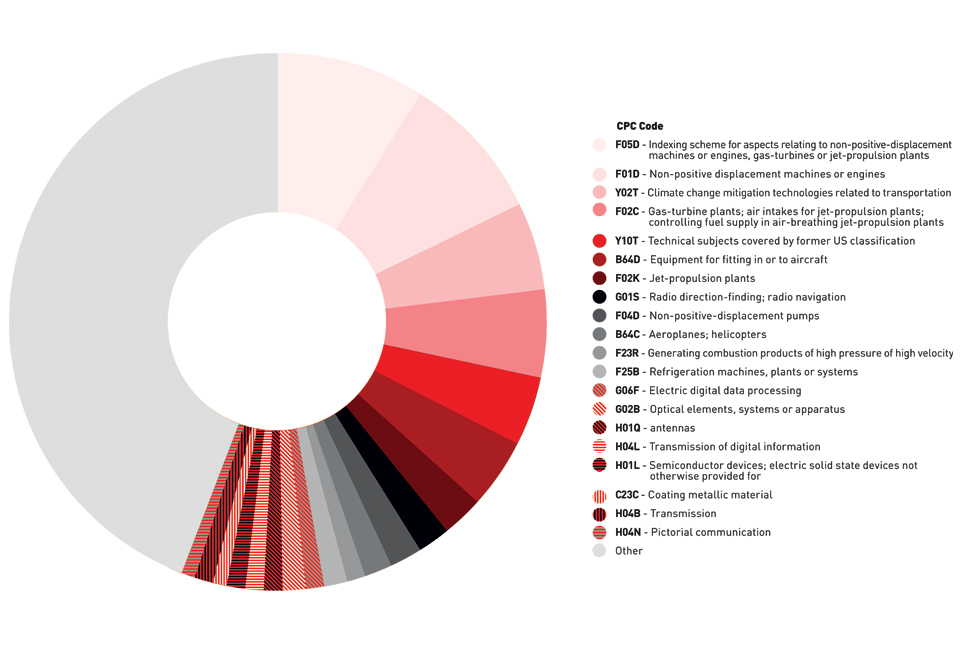