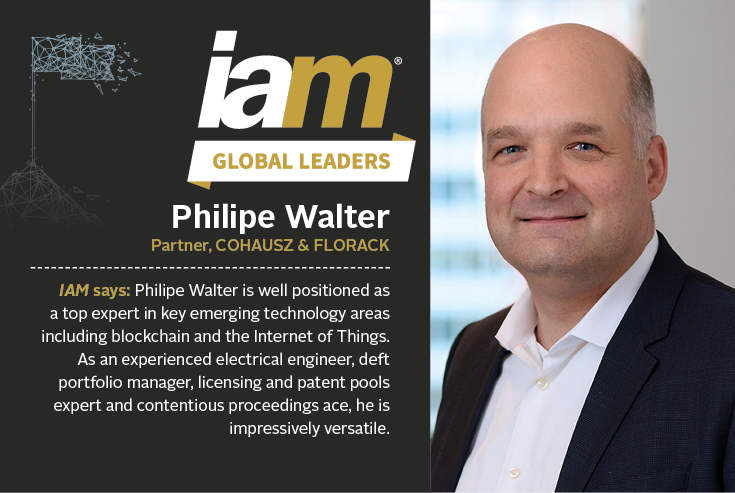 What are the key challenges in prosecuting patents in relatively new areas such as the Internet of Things (IoT) and blockchain?

Another challenge lies in the fact that IoT inventions often require more than one actor. However, in order to have solid grounds for later litigation, both apparatus and method claims should – wherever possible – be directed to single actors. If possible, it is important to condense the invention into the features of single actors and add a system claim with multiple actors as a fallback position.

The independent claims are important and should not contain any dispensable words. Although this should be the standard, in litigation campaigns we often see claim features which are dispensable in view of the cited art. Claims that are drafted in quickly or under constant cost pressure are likely to have these and other severe defects. Remember, when it comes to litigation or licence negotiations, a patent will be thoroughly tested by a group of intelligent people with significant budgets. Saving money at the outset might be more costly in the long run.

Definitions of terms in the claims should be provided in the summary.

The patent should have no procedural flaws (eg, undue extension, lack of priority right or invalid divisionals), which we see surprisingly often in validity analyses.

What are the key differences between prosecuting patents at the EPO and the German national patent office?

Recently, the EPO seems to be focusing more on a patent’s formal aspects, such as clarity or undue extension, rather than on substance (ie, what the invention is about). The German Patent Office appears to be less restrictive in terms of clarity and amendments. However, IoT applications at the German Patent Office often encounter difficulties. For these types of application, it is advisable to try both routes in parallel.

If you could make one change to the current German or European patent regime, what would it be?

In order to increase quality and have more time for substance over formalities, we need better staffing. More examiners means more time per application and thus higher quality, which is beneficial for patent owners and competitors. More time should be spent searching and understanding an invention. Staffing is also an issue at the German Federal Patent Court. In order to avoid or at least reduce the injunction gap, the patent court should be staffed with more judges.

In your experience, what are the key attributes a well-run in-house corporate patent department possesses?

In my view, in-house departments should be:

Nowadays it is not enough just to draft or have drafted patent applications, which, in my view, should not be the task of in-house counsel. Instead, in-house counsel must strategically shape their company’s portfolio and trigger inventions in strategically important fields. Only cost-driven approaches might result in satisfying numbers; however, years later, when litigation is on your doorstep and it is too late to improve your portfolio, regret will be inevitable.

As a patent attorney at COHAUSZ & FLORACK, Philipe Walter has extensive expertise in the electrical engineering, IT and mechatronics fields. He has been involved in numerous proceedings between smartphone manufacturers, as well as court disputes between automotive suppliers and set-top box manufacturers. In addition, he deals with patent law issues in connection with international licence pools that concern video coding standards.