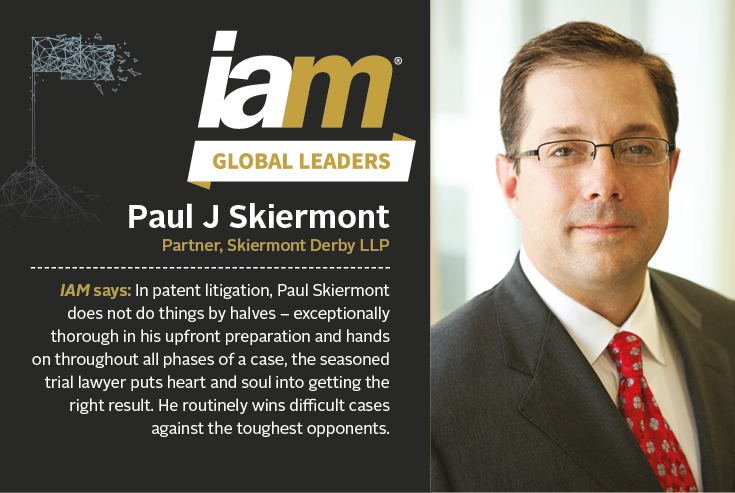 What was it that made you get involved in patent law in the first place?

The first case I was assigned to as an associate at Bartlit Beck was to work with Fred Bartlit on the Cipro Hatch-Waxman antitrust case, representing Bayer. I enjoyed the patent aspects of that case and went on to spend a good portion of the ensuing decade on patent litigation, working on some of the most sophisticated and high-stake patent cases, including patent disputes over leading pharmaceutical products, as well as the patent dispute between Pratt & Whitney and Rolls-Royce over the swept fan blades for the engines that power the A380 superjumbo aircraft. As a result, I was hooked on patent litigation.

What led you to set up your own firm?

What are the challenges facing a relatively small firm competing with bigger rivals and how do you overcome these?

The biggest challenge for a boutique-style patent litigation firm competing against bigger rivals is reassuring potential clients that we can win against the major firms that invariably represent the defendants that we sue. Nearly every case that we handle draws an AmLaw 50 law firm (or similar) on the other side. We overcome that challenge by showing potential clients our successful track record and, more importantly, by working hard to develop a litigation strategy before we are even retained and presenting our strategy to the potential client. Often our competitors appear to be unwilling to invest the substantial hours developing a litigation strategy when they cannot bill for that upfront work. Our business model is also based on sharing risk with our clients in the form of contingent fees or other bonus-based compensation and many of our competitors are unwilling or unable to present that option. Our business model also prioritises experienced lawyers over an army of junior associates, which also contributes to our ability to sign-up premium matters because our clients understand that their matters will be staffed with a team of experienced trial lawyers.

What is the key skillset top-quality patent lawyers must possess?

First and foremost, top-quality patent lawyers must possess a willingness and ability to dig in to the patented technology such that they can comfortably and effectively cross-examine leading experts in those technology areas. As such, curiosity, persistence and an abiding passion for the work are highly prized personality traits. A close second is the ability to distill incredibly complex issues in such a way that they can persuasively present their case to lay judges and juries in a way that they understand. Many judges and juries are nervous and concerned that they are not equipped to handle the tasks that they have been called on to perform, particularly when the technology is complex and they know that the stakes are high. In my experience, the first side that gets the decisionmakers comfortable that they can and do understand the technology achieves such a high level of credibility that the decisionmakers turn to them for the answers. Once that happens, the case is nearly won. Finally, top-quality patent litigators must also write well. Patent cases involve an enormous amount of written work product that requires superb organisation, clarity and persuasiveness. You cannot practise in this space at an elite level unless you can write a great brief and I feel like it is a skill that is never mastered — we all still strive to write even better each time.

What are the key elements to devising a best-in-class IP strategy?

Developing a best-in-class IP strategy requires understanding and deploying all of the tools available for protecting intellectual property, and specifically tailoring the strategy based on your client’s business and the market in which it competes. There is no ‘one-size fits all’ IP strategy. Sometimes it is best for a client to disclose its inventions to the world in exchange for 20 years of exclusivity; other times a client is best served by keeping its inventions secret forever. To develop the perfect IP strategy for any given client requires both a deep understanding of all of the tools available and their pros and cons (eg, utility patents, design patents, trademarks, copyrights and trade secrets) and a deep understanding of a client’s business and objectives.

What are you most proud of about the firm you started and why?

I am most proud of the team that we have assembled at Skiermont Derby. Every attorney, legal assistant and staff member at our firm could work (and have worked) for the most prestigious firms in the United States. As such, I am eternally grateful and proud that they chose to join our team. They care deeply about our clients, their colleagues and in creating excellent work product every day. If you were to ask anyone at our firm “what do you do for a living?” I expect they would all answer “whatever it takes”. Further, I am also proud of the quality of the work that we consistently provide to our clients and the work product we file at the PTAB and the courts. I am proud that our team is passionate about creating excellent work product.

What do you see as the keys to successful deal making?

In my experience, the fundamental key to deal making is understanding your counter-party — what are its motivations, goals, fears? These things are learnt by building a relationship, which requires humility and showing that you can be trusted. A successful deal is one that is perceived to serve everyone’s interest. In addition, a willingness to be creative in a way that is perceived to achieve your counter-party’s goal can be the difference between succeeding and failing in any negotiation.

What case are you most proud of being a part of and why?

There are two and they were both the kind of David versus Goliath cases that I formed Skiermont Derby LLP to handle: the first is LoggerHead Tools v Sear Corporation. We represent LoggerHead Tools, which is a small father-and-son operation that had created a unique new hand tool: the Bionic Wrench®. They manufactured this tool in the United States. LoggerHead’s biggest distributor for the tool was Sears, which sold more Bionic Wrenches than any of its Craftsman® hand tools. Sears contracted with Apex to create a knock-off of the Bionic Wrench that was manufactured in China, which nearly destroyed LoggerHead Tools. We sued Sears and Apex for patent infringement and, after more than five years of hard-fought litigation, we finally tried the case before a jury, which found that Sears and Apex’s product had infringed LoggerHead’s patents and also found that infringement willful. The most rewarding day of my legal career was seeing our clients’ faces when the jury verdict was announced. It was very emotional and validated my decision to leave a great law firm so that I could represent clients like LoggerHead Tools. That case is currently on appeal at the Federal Circuit, after the district judge changed the claim construction post-trial and vacated the verdict. The appeal is fully briefed and we are looking forward to arguing the appeal on LoggerHead’s behalf soon.

The second case I am most proud of is Rensselaer Polytechnic Institute (RPI) v Apple. We represented RPI and its exclusive licensee, asserting a single software patent against Apple’s Siri personal assistant. After nearly five years of litigation, which included several inter partes review challenges that we defeated, Apple settled on the eve of trial (after its dispositive and Daubert motions had been denied) for $20 million. The RPI professor who was the lead inventor on the patent believed in our team, and I will always remember how he beamed with pride and joy when Apple ultimately decided to pay for a licence to his invention just as he was retiring from teaching.

If you could make one change to the current patent regime in the United States, what would it be and why?

There are so many ways to lose a patent case these days that is difficult to identify just one. So, I will focus on two related issues that I believe are fundamentally unfair to patent owners:

How do you expect the US patent environment to evolve over the coming years?

I expect it that it will not change dramatically, but I am optimistic that there may be some incremental movement of the law that is more favourable to inventors. In part that is because it is hard to imagine it getting much worse and because we are already seeing some movement in that direction. At the PTAB, institution of inter partes review is becoming marginally more difficult for patent challengers. Further, in litigation, while Section 101 of the law is still an absolute mess, there has been some incremental movement making Section 101 motions more difficult to win, particularly early in the litigation at the motion to dismiss stage. I think the data would show that the longer a patent is litigated, the less likely it is that courts will find the invention directed to an abstract idea because the more courts learn about the invention and the state of the art at the time of the invention they are much more likely to understand and conclude that the invention is a tangible advance over the state of the art that existed at the time of the invention.