What unicorns can tell us about the real world

Labelling start-ups as ‘unicorns’ suggests that they might have mythical powers. However, from an IP perspective, they are just like any other company

Yes, we know the term “Unicorn” is not perfect – Unicorns apparently do not exist, and these companies do – but we like the term because to us it means something extremely rare, and magical.

When Aileen Lee posted to TechCrunch just over two years ago, there were 39 so-called ‘unicorns’ based in the United States, representing 0.07% of venture-backed consumer and enterprise start-ups. Since then, numerous other studies have been undertaken, and both TechCrunch and The Wall Street Journal keep permanent tallies.

More recently, these companies have been studied through the patent lens, first by Aistemos (using Cipher) and more recently by Foresight Valuation Group. What is interesting about IP analytics is how they can shine a light on an asset class that has for too long been hidden from view. This helps companies to build more effective IP strategies and enables investors to deploy capital more wisely.

Here is a simple guide to unicorns:

Before embarking on further analysis, remember that corporates are not born as unicorns and do not stay unicorns for long. That said, they are still an interesting group to study.

Let us begin by considering what is necessary from an IP perspective to build and grow a successful start-up in today’s technology-centric world.

All companies must have an IP strategy as an integrated and essential element of their business strategy. While patenting will form a key element of this, so will all other intangibles (eg, brand, content and trade secrets).

Benchmarking is another important factor. Investors have literally thousands of opportunities and are hunting for best in class. If a company is an outsider from an IP perspective, questions will be asked.

Risk management can be central. Intellectual property is now a material risk for all emerging companies that rely on technology. This can be too easily ignored at the start (the incentive to sue a new company is small), but the risk can quickly materialise – everyone wants to hunt a unicorn.

When it comes to the IP lifecycle (see Figure 1), investors are aware of the IP conundrum that what can start as a hallmark of innovation (a patent filing) can become successively a near-death experience (patent litigation), a material cost (patent acquisition), a core business lever (offensive litigation, cross-licensing) or a material source of revenue (security, monetisation and exit).

It is against this backdrop that we study unicorns from a patent perspective.

What do unicorns do?

In the breakdown below (Figure 2), we have analysed unicorns by sector, showing which of these companies own patents.

Overall, 56% of unicorns own patents. A different perspective can be derived by studying from where unicorns originate, as seen in Figure 3.

This reveals the reality that patents are more important to unicorns growing up in the United States. 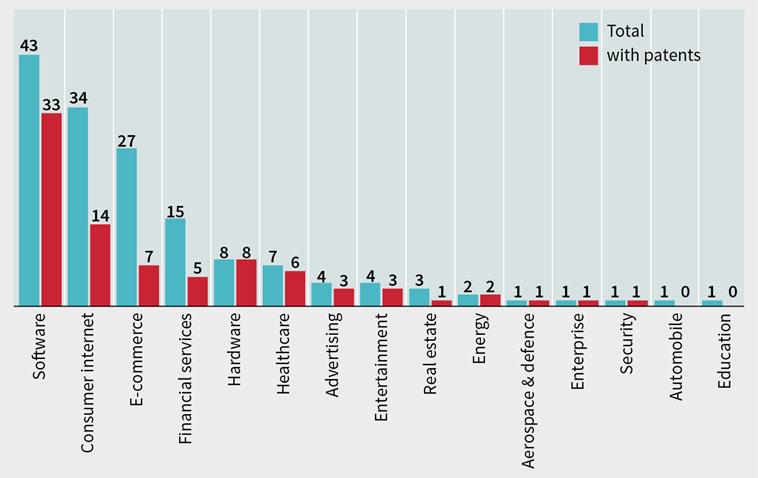 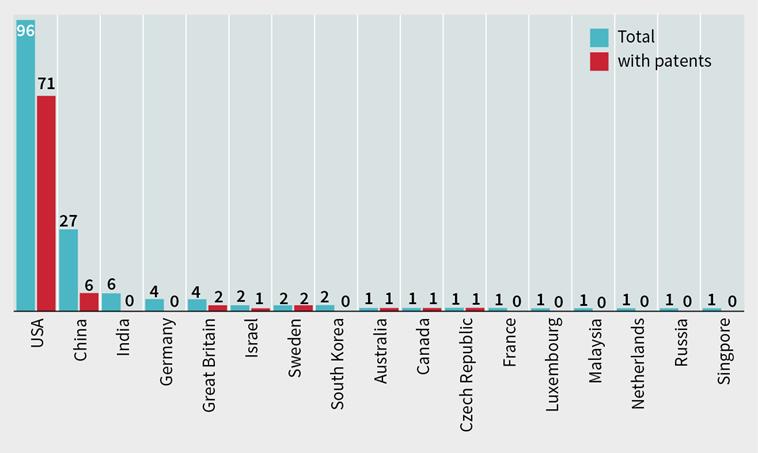 In the world of IP analytics there is a big difference between counting and what counts. However, a study of both is dramatic. Figure 4 is a representation of both the size of the top 10 patent-owning unicorns and their growth over the last 12 months. The numbers are staggering – especially for the Chinese unicorns, which have double or triple digit growth, although most of their patents are still pending.

As can be seen, both DJI and Xiaomi (and Sogou for that matter) mainly own rights in China. To the extent that unicorns have global ambitions (and typically they do), the territorial footprint of the portfolios is important. Only Intarcia Therapeutics and Proteus can be said to have global patent strategies. 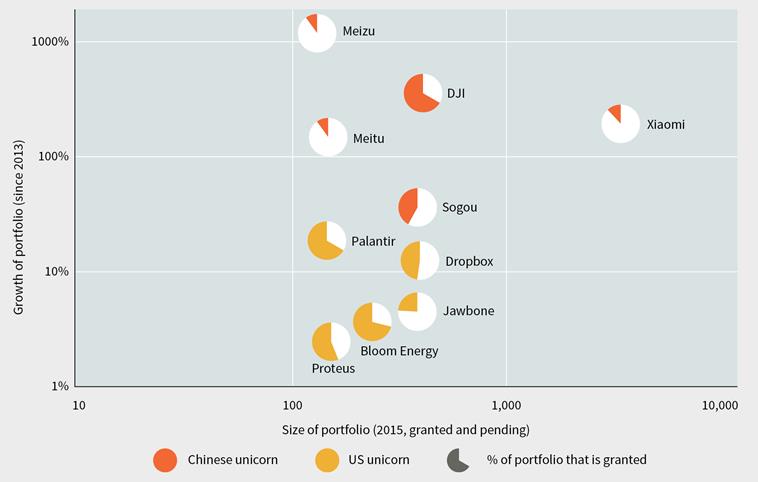 Unicorns typically disrupt markets and challenge incumbents. This makes them a target for operating companies. The problem for young unicorns is that, even when they have invested in building a patent portfolio, they have not had the time for their efforts to mature into a sizeable granted portfolio. To alleviate this risk, unicorns often purchase patents: 24 unicorns (28% of those that own patents) have acquired patents.

Table 1 illustrates patent acquisitions made by some unicorns. Figure 6 and Figure 7 demonstrate the fact that many unicorns use acquisition as a strategy, not just a tactic. 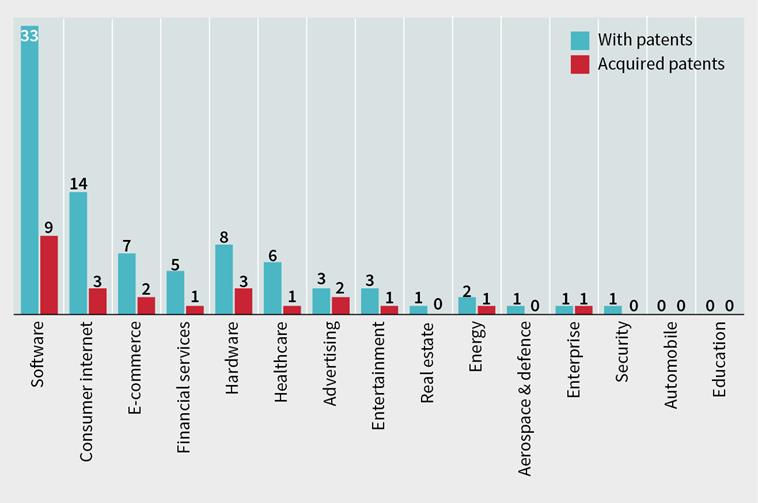 Figure 7. Unicorns with more than one patent acquisition

This need also underlies some of the M&A activity of unicorns – for example, Jawbone’s acquisition of BodyMedia, which both addressed weaknesses in its own portfolio and provided it with offensive capability (eg, its recent litigation against Fitbit). 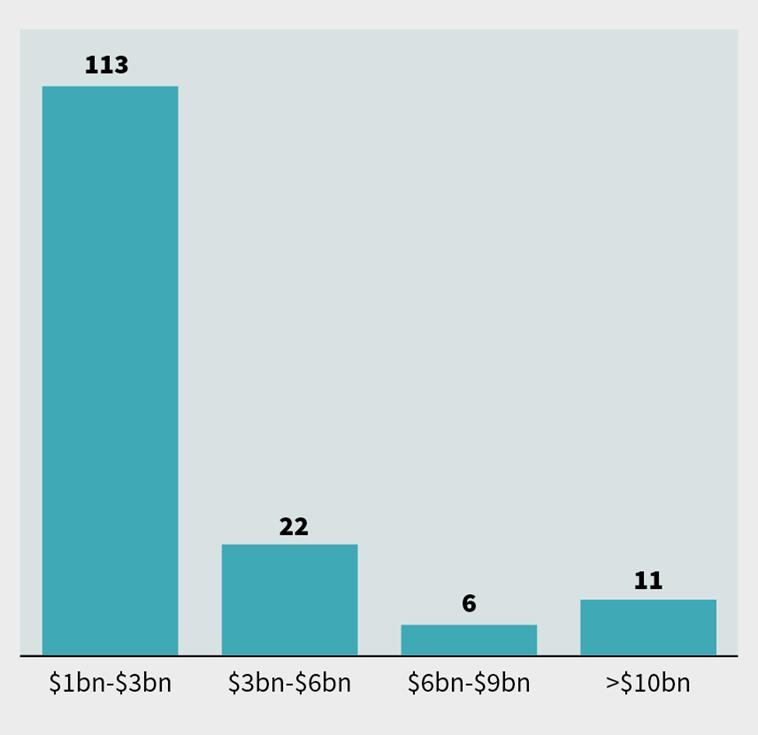 While studies of this sort tend to focus on the unicorns of today, these habits are not new. Facebook purchased patents from AOL, Fujifilm, IBM and others, while Twitter acquired close to 1,000 patents only months after its initial public offering (IPO). In the same context, Uber was reported to be a bidder for the Nokia HERE portfolio, which was sold to an automobile consortium for $3 billion in August 2015. But not all unicorns are the same. Figure 8 outlines the distribution of valuations, with the vast majority merely obtaining their unicorn status (51% of unicorns are valued at $1.5 billion or less). Table 2 showcases the huge valuation spread among so-called ‘decacorns’ – start-up companies with a valuation of $10 billion or more.

Investors are increasingly aware of the importance of patents and sensitive to the costs and disruptive effects of IP litigation. For this reason, it is not uncommon for companies preparing for an IPO to be hit by a lawsuit (the recent claim by Jawbone against Fitbit is a good example). As for decacorns, 64% of these were sued within six months of a major funding round. Only Didi Kuaidi (a taxi-sharing platform active only in China), Flipkart (an e-commerce outfit active only in India), WeWork (a US-based real estate business) and Space X (a US aerospace manufacturer) were not sued. 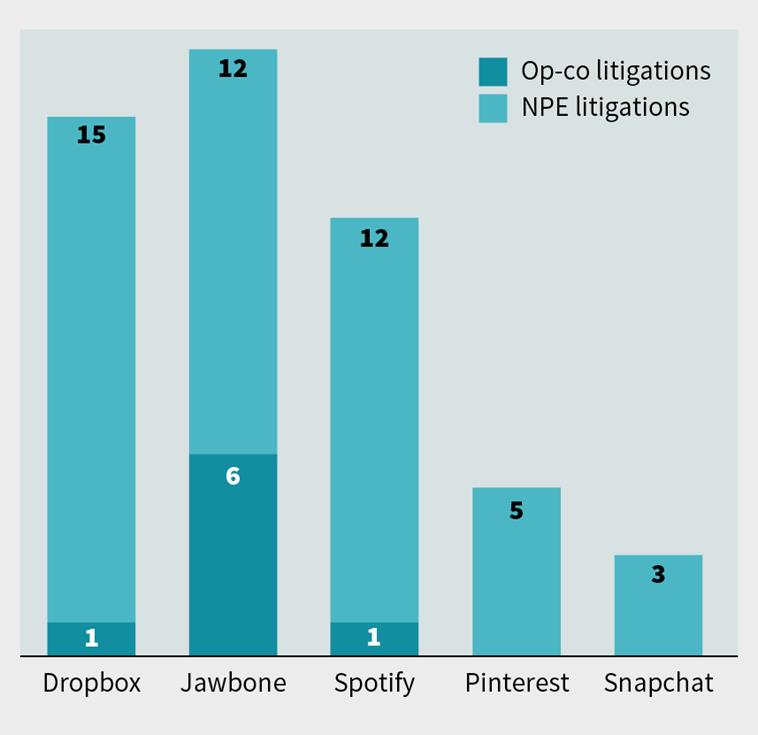 However, all unicorns are vulnerable to lawsuits and a quarter have been sued for patent infringement, by both operating companies and non-practising entities (NPEs). As a group, unicorns are defendants in over 140 actions (40 by operating companies), with 73 currently active. Popular targets are unicorns in the software and consumer internet sectors. Not all the actions are NPE-driven – Jawbone’s litigation profile is a good example of a unicorn being targeted by competitors in a hotly contested market. Figure 9 shows the top five targets. 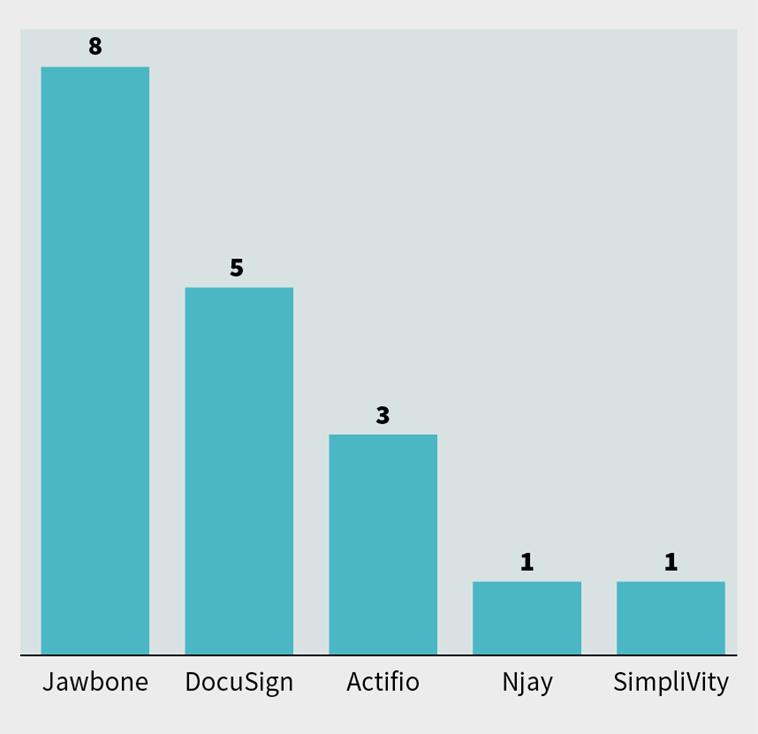 However, it does not take long for the hunted to become the hunter. We have already referred to Jawbone’s action against Fitbit – this is typical of the breed. Docusign, Actifio, Njoy and SimpliVity have all engaged in actions against other operating companies (Figure 10). Good Technology (a 2013 unicorn) was typical in this respect – it sued nine times and commenced 16 actions, against Microsoft among other targets. As an important post-script, BlackBerry acquired Good Technology in September 2015 for $425 million – a stark reminder that not everything that looks like a unicorn is one.

Two recent Financial Times articles (“Technology: Unicorns face end of the ‘steroid era’”, November 10 2015 and “Unicorns beware, markets get it wrong on tech valuations”, November 13 2015) make exactly this point by reference to the forthcoming IPO of Snapchat with a valuation of $6 billion, one-third of its valuation a year ago. The later article analyses three outstanding examples of the breed: Amazon, Netflix and Tesla (combined valuation of $390 billion). It is definitely worth questioning whether unicorns are real after all.

Unicorns – a fable of our times

A study of unicorns teaches a variety of lessons, which have a much broader application.

Investors have a more sophisticated understanding of intangible assets

While not owning many or any patents may be a reasonable position, companies will have to explain their IP strategy – especially if their competitors have strong and global portfolios.

Space X makes a virtue of its no-patent policy. Elon Musk’s view is that he is better served by trade secrets, especially as the Chinese market is growing and with it the risk of copycats.

However, we must always be cautious when studying small or unusual samples. While Figure 3 might suggest that only 36% of European start-ups focus on patents, if you take another sample of start-ups – such as those companies in which IP Group plc has invested – you get a different and perhaps more realistic view. 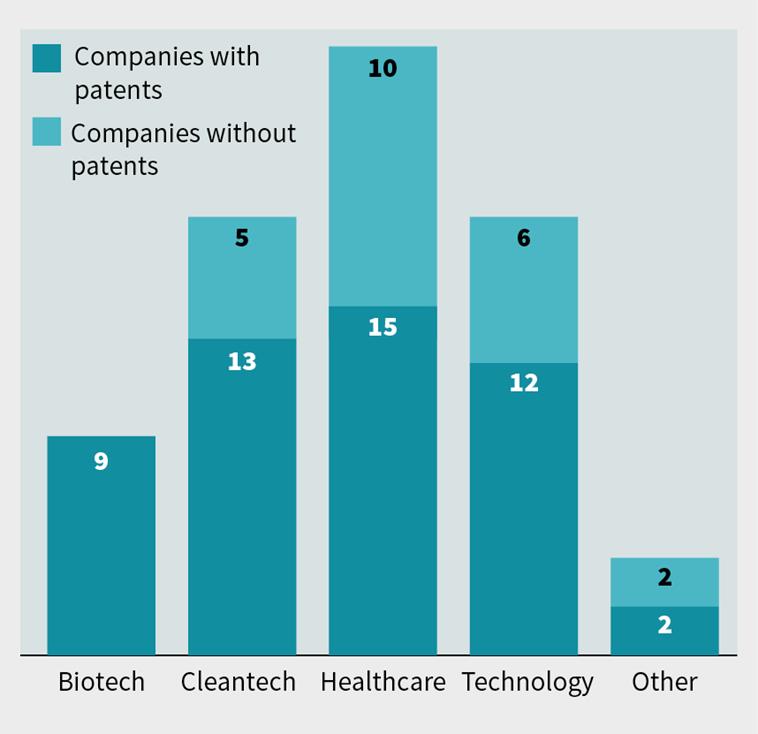 Figure 11 is a study of 74 companies which IP Group publicly refers to, and over 70% own patent rights. The relevance of patents to these businesses is much greater when you factor in what is licensed to them (many are university spin-outs). A stronger point is that companies with innovation at their core make for a powerful investment strategy. This statement is even true in sectors where patents have no role to play, and especially true in conditions where more real-world valuations apply.

Understanding and managing IP risk is essential to any IP strategy

From the transformation of the entertainment, retail, financial services and automotive sectors to the ubiquitous deployment of cloud-based services, no company is immune from IP risk. Because the lifecycles of unicorns are so condensed, it is easy to see the stages and changes that they undergo. However, all companies need to understand the risks they face and how to mitigate them. If the risk is acquisition, then analytics to monitor the market may be the answer. If insurance, then data relating to claims and prospective claims will be relevant. Similarly, if the best strategy is to litigate, be prepared to justify this. This will involve not only a microscopic analysis of a specific patent claim, but also how this will play out over geographies and the sector more generally.

Opportunities presented by recognition of intellectual property as an asset class

In May 2015 Jawbone announced a $300 million loan from BlackRock. This was secured on Jawbone’s intangibles and specifically its patents. We anticipate many more deals of this type for companies that can establish that they own quality assets. This will require evidence of not only how they relate to the ongoing business, but what value they are likely to have in the event that the loan is not repaid and the security is enforced. While MIPS was in no way a unicorn, its demise tells a similar story – while the operating company was sold to Imagination for $60 million, the patents were sold separately for $350 million (well in excess of the entire company’s then market capitalisation).

What unicorns tell us about the real world is that no two companies, sectors or geographies are the same from an IP perspective. However, understanding these differences matters. The significant advances in the availability and accessibility of IP analytics mean that there is now greater transparency about who is doing what and why. Gone are the days when understanding the importance of patents was confined to IP specialists. While unicorns are rare and magical, patents are the manifestation of real-world innovation.

A study of companies with pre-exit valuation of $1 billion or more (so-called ‘unicorns’) helps with an understanding of a number of patenting trends common to both innovative start-ups and established companies which rely on high-tech enabled business models.

While unicorns are extremely rare and magical, their trials and tribulations have widespread implications.

Nigel Swycher is CEO and Sebastian Müller-Borges is a strategy analyst at Aistemos, London, United Kingdom