By Sumair Riyaz and Sundararajan Kumar

Much has already been written about China’s rise to prominence in the global patent arena over the past decade. As a result of various policies and incentives set out by the government, the country has matched and then exceeded the United States in terms of the volume of patents being filed. In addition, it has made swift, subtle moves to ensure that its presence is felt in sectors such as high-tech and automotive.

However, these government policies have been the focus of much debate. Earlier this year, China’s leadership announced that it would stop paying subsidies for patent filings by 2025. This move might reflect a shift in China’s IP lifecycle – akin to the evolution of a Silicon Valley start-up that looks to rapidly build up its portfolio in order to obtain freedom to operate before placing more emphasis on the quality of its patent assets.

Foreign companies do feature on the IAM/Dolcera China Patent 100 – the ranking of the 100 largest Chinese patent owners. South Korea’s Samsung Electronics and LG both make the top 10, while Japanese giants such as Sony and Panasonic are prominent, and Qualcomm leads the way from the United States. But the data shows the extent to which China’s recent IP rise has been overwhelmingly driven by domestic entities. The local landscape continues to be dominated by tech giants such as Huawei and energy behemoths such as State Grid Corporation, along with a cadre of research institutes.

The rankings reflect the fact that China’s goal to be a leading player in a range of sectors, including telecoms (local player ZTE also makes the top 10 along with Huawei) appears to be bearing fruit. Software/internet services has also been fertile ground; with overseas companies such as Facebook and Google banned from the local market, the space is dominated by local leaders Baidu and Tencent.

Elsewhere, such as in electronics and automotive, foreign businesses maintain an edge – at least in terms of granted patents.

Figure 1 shows the stark divide in countries of origin for patents filed in China, with incentivised programmes and tax benefits accelerating filings by domestic companies. Japanese entities have also been prolific filers with 4.3 times fewer filings than local players. Meanwhile, US firms file half the number of patents that Japanese entities do in China. This pattern is in sharp contrast to activity in both the United States and Europe, where domestic giants rub shoulders with a far larger array of foreign businesses.

Figure 1. Overall granted patents based on country of origin of the filing entity for the top 100 players 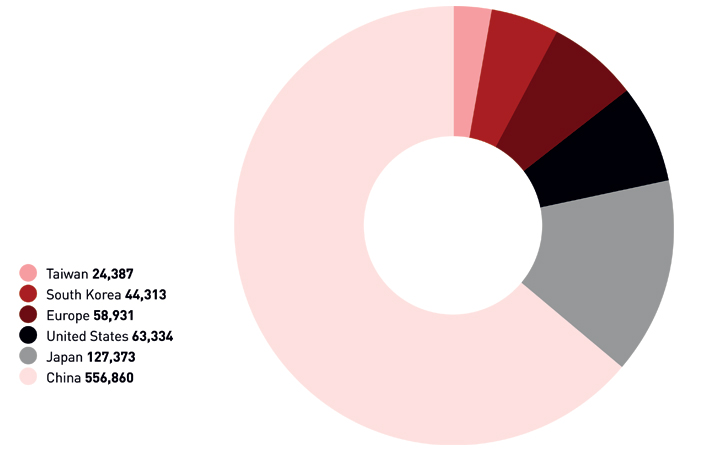