The 1,000 Club: lifting the lid on the IP-owning elite

Having revealed the 100 largest patent owners last month, IAM and ktMINE have once again teamed up to bring you the ranking of every company that owns at least 1,000 US grants

This year marks the second annual IAM/ktMINE US Patent 1,000 Club analysis, which lists all entities owning at least 1,000 granted, in-force US patents. This data is collected and aggregated from ktMINE through its IP data and analytics platform. ktMINE gathers IP data from sources and regulatory bodies including the US Securities and Exchange Commission (SEC), the USPTO, the EPO, WIPO, the System for Electronic Document Analysis and Retrieval, and the Public Access to Court Electronic Records, along with hundreds of news sources. It then links these datasets to form the most comprehensive repository of IP data available.

Who made the cut?

More than 367 entities – controlling more than 1.9 million patent assets – made our list in 2018. This included 33 new entrants, while 18 entities were dropped from the list. There are many reasons for these additions and subtractions, not least of which include substantial acquisitions and divestitures. Twenty entities saw no change in their position on the list, including those in the top five. Another 102 entities moved up the list, with the automotive and financial sectors well represented. The remaining 173 saw a drop in the rankings, with no industry in particular standing out.

A new norm for patent filings

The median granted patent portfolio is 2,242 patents, while the average for all of the top 1,000 exceeds 5,200 granted patents. The median number of patent applications filed in 2018 was 195. The top 10% of companies control more than 873,000 US patents and own more than 80% of all of the patents accounted for within the IAM/ktMINE US Patent 1,000. With patent filing rates ticking higher year on year and as more high-tech corporations mature into their respective markets, it is unsurprising to see an increasing number of companies exceeding 1,000 granted US patents as they expand their IP coverage. Outside of electronics and software, we are seeing more consumer products entities break into the list, with Electrolux, PepsiCo, Bose and Mattel marking their debut. Other notable names joining the ranks include Mazda, Tencent, Karsten Manufacturing and Silicon Laboratories. Year on year, the top 10 has stayed largely the same, with Toshiba being the one exception – the decline in its portfolio due to a recent divestiture of patent assets to Pangea KK.

Electronics companies maintain the majority of patent assets in the top 1,000, with semiconductors and automotive rounding out the top three largest industries. Although there are 13 financial institutions represented, many companies assign the rights of patent assets to serve as collateral on loans, so assets held by financial entities may not necessarily reflect their direct innovation efforts. Accordingly, we might expect to see measurable IP turnover from the financial institutions year over year. We are seeing a few more research institutions creep into the top IP owners list, including the first entrant from India: the Council of Scientific and Industrial Research. Surprisingly, the largest research institutions listed are Asian-based non-profit research firms such as the Electronics and Telecommunications Institute in South Korea and the Industrial Technology and Research Institute based in Taiwan. 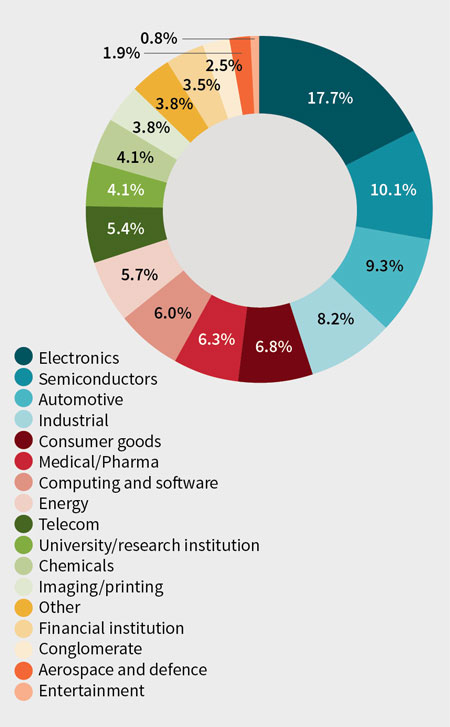 This list comprises corporations based in just 24 unique countries. Japanese entities alone control almost 500,000 US granted patents. About 18% of companies are based in Europe (249,000 assets), 31% are based in Asia (773,000 assets) and about 48% are located in North America (899,000 assets). Just three entities are located outside the top three major regions: Sabic Global, Saudi Aramco (both Saudi Arabia) and Absa Bank (South Africa). 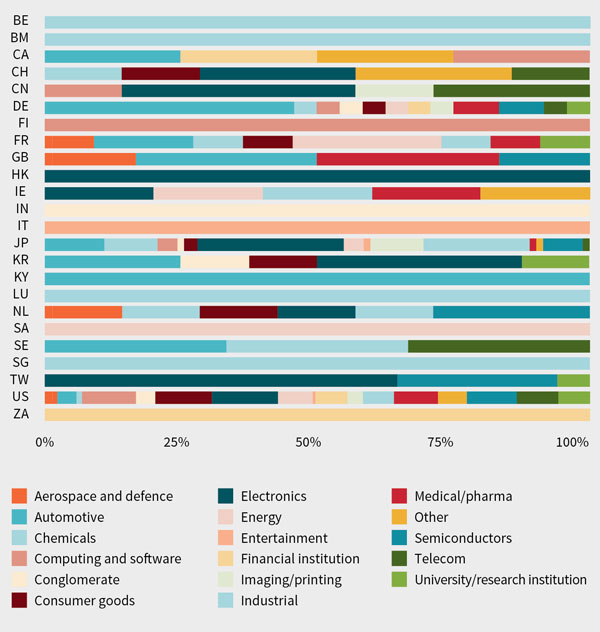 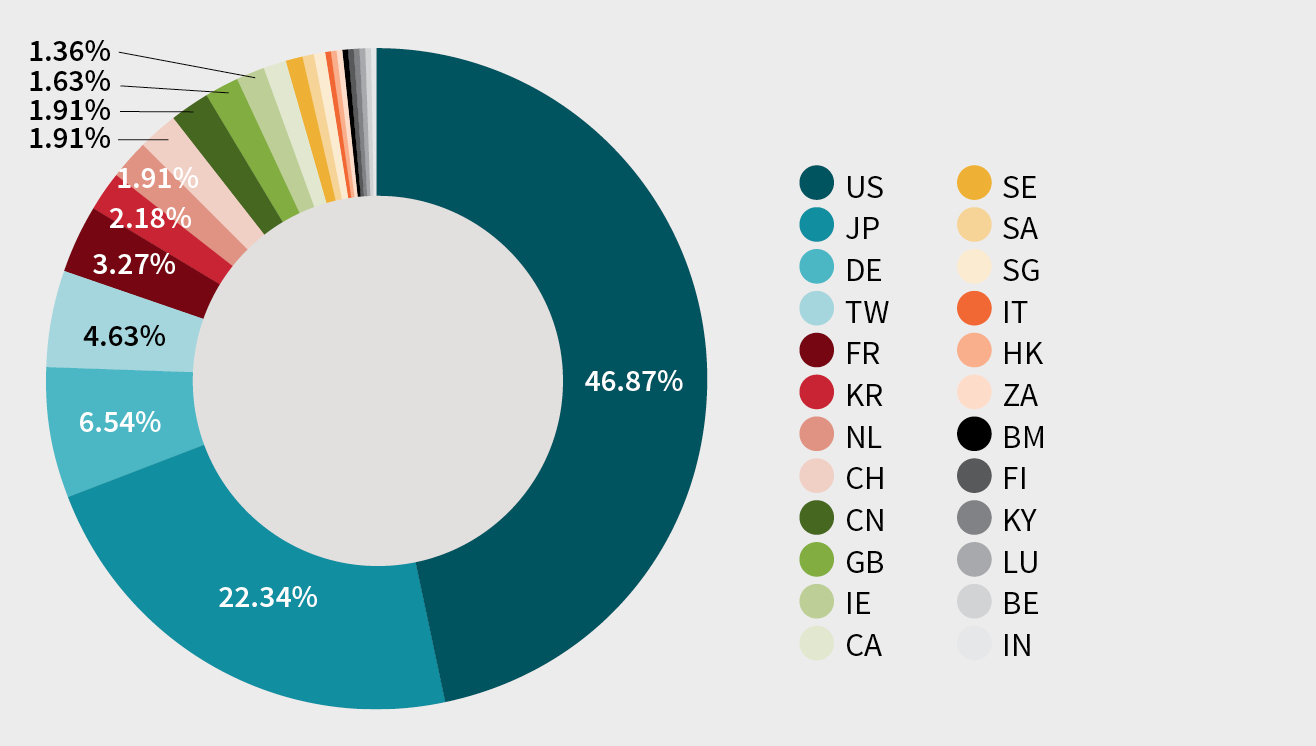 Application activity on the rise

The following chart lists the entities with the highest ratios of applications to their granted patent portfolios. Pending patent applications indicate that a company has filed for a patent and is awaiting approval from the relevant patent office. Trends showing an increase in application activity relative to granted portfolio size suggest that the amount of capital that companies are investing in innovation is increasing. The highest ratio of application to granted patent portfolio is held by Tencent, a company that can boast more than 122% growth in patent applications over its granted patents. Out of the top 10 largest relative patent application portfolios, four entities are based in the United States: eBay, Salesforce, Johns Hopkins and Facebook. The average growth of apps to grants is 25%, and all the companies listed in the top 10 are growing their relative portfolios at more than double the average.

Table 2. Companies on the move

These are companies that published a large portion of their entire patent portfolio in 2018; we would expect such companies to see sizeable growth in granted patents in the coming years. It is clear that they have made filing patent applications a priority in their business strategy; some of these entities did not appear on the top 1,000 last year at all (eg, Tencent and Semiconductor Manufacturing International).

To create this list, ktMINE analysed patent publications to determine granted and pending patent applications in good standing with the USPTO. Granted patent data includes utility patents along with design and plant patents. Patents and applications that have expired, been abandoned or are otherwise unmaintained are excluded from this dataset. The data pulled for this publication is current as of 1 January 2019. ktMINE technology aggregates each granted patent and application owner to a corporate tree in order to create the most up-to-date, accurate and complete snapshot of each company’s patent portfolio. Each entity is designated by the location of its corporate headquarters for supplementary analysis. In addition, we include the ratio of patent application activity to consider the rate of an entity’s innovation. These are based upon each entity’s patent publication activity in 2018 relative to its overall portfolio of granted patents.