A snapshot of the global patent landscape in eight charts

WIPO’s Indicators 2019 report sheds light on the state of the global patent landscape using data provided by national and regional IP offices. It confirms that IP activity continues to experience strong growth, which further supports the argument that the global economy is becoming increasingly innovative in nature.

We’ve gone through 48 pages of graphs and charts to bring you the eight top takeaways.

Worldwide patent applications grew by 5.2% on the previous year. Not surprisingly the growth was spurred by China which received 1.5 million applications in 2018. Among the top five offices, China, the EPO and the Republic of Korea reported an increase in applications, up by 11.6%, 4.7% and 2.5% respectively. Japan and the US saw small drops in filing activity, by 1.5% and 1.6%. This was the first time the US experienced a drop in application in nine years.

Although applications filed in the US dropped in 2018 it remains a key market, this is clear from the high proportion of non-resident applications the USPTO received. Other jurisdictions where foreign applicants are in a majority include Australia, Canada and India. The EPO also receives more applications from entities based outside Europe than within the continent. China, Germany, Japan and the Republic of Korea, on the other hand, report much lower levels of non-resident applicants.

3. Chinese applicants are focused on their home jurisdiction, but this has been changing

Less than 5% of the total applications originating in China (4.5%) are also filed abroad. While this is a small proportion it is worth noting that the number of foreign applications filed by Chinese businesses has grown at an average annual rate of 21.2% since 2008. Inventors from Canada, Israel and Switzerland have a strong foreign focus, with 82.2%, 90.3% and 80.3% of their applications being filed abroad. Overall US applicants filed the most equivalent overseas applications, followed closely by the Japanese, with the Germans in third place.

5. Shares of rejected applications highest in UK and US

India, the UK and the US granted less than 35% of the applications examined by their IP offices in 2018. The UK and US also recorded the highest levels of rejected applications.

6. Computer technology was the most frequently featured field 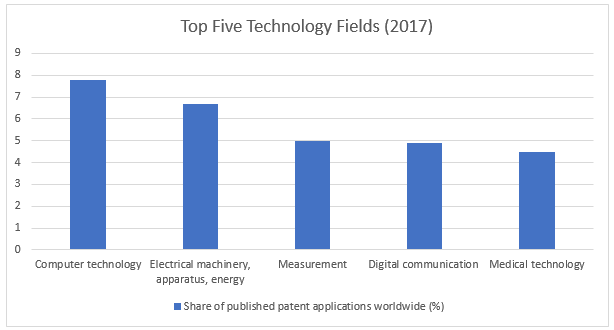 The last available complete dataset for published applications by technology field is for 2017 because of the delay between an application being submitted and published. Computer technology was the most patented technology in 2017, followed by electrical machinery, measurement, digital communication and medical technology. Together these five fields accounted for 28.9% of all published patent applications. This is not significantly different from previous years. Among the top 20 technology fields, food chemistry experienced the fastest average annual growth between 2007 and 2017 at 13.4%. Each technology area grew during this period except for audio-visual tech and optics, which dropped by 1.2% and 0.6% respectively.

Out of the top 10 countries of applicant origin, and between 2015 and 2017, China and the US filed the most heavily in computer technology. Applicants from Japan and the Republic of Korea focused on electrical machinery, while businesses in France and Germany were prominent within transport. Innovators based in Switzerland and the UK favoured pharmaceuticals, whereas those from the Netherlands filed heavily on medical technology. Applicants from the Russian Federation had a strong focus on food chemistry.

7. US-based businesses file the most PCT applications but are trailed closely by Chinese entities

8. Female inventors accounted for 17.1% of all inventors listed in PCT applications

In 2004 only 12% of inventors listed in PCT applications were women. This proportion has grown - minimally - to 17.1%. The gender gap between PCT inventors changes depending on the country considered. Of the top 20 countries of origin, China, the Republic of Korea and Spain recorded the highest shares of female inventors, at 28.9%, 26.8% and 24.4% respectively. The lowest shares were found in Germany (10.3%), Japan (10.1%) and Austria (9.4%).

The data in this article was sourced from the World Intellectual Property Indicators 2019 report.