There is no doubt that in recent decades the patent system has turned from almost exclusively patenting hardware to progressively patenting software. This long-time trend is gathering momentum thanks to increasingly powerful smart devices and communication technologies enabling new technology trends such as the Internet of Things or the fourth industrial revolution. AI methods have increasingly been used in image processing to recognise objects (eg, in robotics, autonomous vehicles and medical diagnostics), while AI systems using natural language processing have made virtual assistant systems such as Siri and Alexa possible.

These developments are also reflected in patent statistics. At the EPO, the proportion of computer-implemented inventions in AI-related inventions rose rapidly between 1998 and 2014, especially in the automotive sector (from 36% to 63%) and medical technology sector (from 31% to 49%) and is still growing in each sector.

However, the term ‘software patent’ itself is not legally defined in the EPO’s European Patent Convention (EPC) (nor in any other national patent law of its member states). ‘Software’ is commonly understood as abstract concepts or ideas which are to be implemented on computers using computer programs. The EPO grants patents to such computer-implemented inventions (CIIs). A CII involves the use of a computer, computer network or other programmable apparatus, where one or more features are realised wholly or partly by means of a computer program.

Under Article 52(1), European patents will be granted for any invention, in all fields of technology, provided that they are new, involve an inventive step and are susceptible to industrial application.

According to Article 52(2), the following will not be regarded as inventions within the meaning of paragraph 1:

It is notable that, according to Article 52(1) of the EPC, patenting before the EPO first requires an invention, but it does not define what an ‘invention’ is. The wording of Article 52(1) “in all fields of technology” should emphasise that whatever an invention is, it is at least somehow related to technical aspects. For this reason, Article 52(2) provides for a non-exclusive negative list of what is not regarded an invention, most notably computer programs, meaning that European patents cannot be granted for subject matter solely relating to software.

However, only completely non-technical or pure abstract concepts should be excluded, which is why Article 52(3) of the EPC excludes patentability of computer programs only to the extent that European patent applications and patents relate to that subject matter ‘as such’. Although, the EPC does not exclude computer programs (software) ‘as such’, this criterion is vague and has therefore been subject to numerous case-law decisions in recent decades. Eventually, it resulted in the requirement of ‘technical character’.

This long development of the case law is reflected in the EPO Guidelines, which is why the guidelines on this aspect are extensive but confusing. For this reason, the guidelines include an index for CIIs.

The EPO Guidelines (G-II, 3.6) explain that the exclusion from patentability of “programs for computers as such” does not apply to computer programs “having a technical character”. Computer programs with technical character will produce a “further technical effect” when run on a computer, beyond the mere physical interactions between the program (software) and the computer (hardware) on which it is run (T1172/97).

The normal physical effects of the execution of a program (eg, the circulation of electrical currents in the computer) are not in themselves sufficient to confer technical character to a computer program.

In practice, any computer program basically amounts to a method that is to be implemented by a computer. Therefore, it seems possible to claim a software invention in the form of a computer-implemented method rather than a computer program and thereby overcome the hurdle of technical character and exclusion from patentability. Alternatively, the further technical effect can be shown by including in the claim the concrete application of the computer program in a field of technology to pass the eligibility hurdle of Article 52(2) and (3). Examples include a computer program controlling load balancing of a processor or a memory allocation; a computer program specifying a method of controlling an anti-lock braking system in a car; determining emissions by an X-ray device; compressing video; restoring a distorted digital image; encrypting electronic communications; among others. 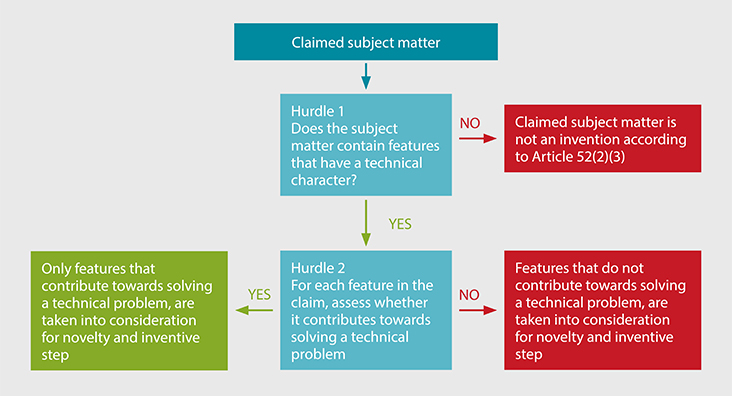 Hurdle 1 deals with whether claimed subject matter (ie, the claim) is regarded as an invention and not excluded from patentability (Articles 52(1), (2) and (3) of the EPC).

This basic test of whether there is an invention within the meaning of Article 52(1) is separate and distinct from whether the subject matter is susceptible to industrial application, new and involves an inventive step. Technical character is assessed without regard to the prior art (see T 1173/97, confirmed by G 3/08).

To pass Hurdle 1, it is sufficient that the claim contains at least one feature that has technical character. If yes, the claim does not refer to computer programs, as such, and is therefore not excluded by Articles 52(2) and (3). If no, there is no invention within the meaning of Article 52(1) (see Figure 2).

Figure 2. Does the claimed subject matter have technical character?

Although Hurdle 1 (technical character) may be readily overcome in many cases by either explicitly claiming a computer-implemented method or referring to the application in a field of technology, the further requirements of Article 52 must be fulfilled – and this poses a second hurdle.

Hurdle 2 deals with whether the invention is novel, involves an inventive step and is susceptible to industrial application (Article 52(1)). While novelty and industrial application are usually not an issue, most discussions in examination revolve around the assessment of inventive step. The positive assessment of an inventive step generally requires a non-obvious technical solution to a technical problem (ie, a technical contribution to the prior art). In the case of CIIs, the claims often include a mix of technical and non-technical features and are referred to as ‘mixed-type claims’.

In case the sole technical elements in a claim are well-known computer means (eg, processors, networks, memories and databases) implementing a non-technical use, the claim will not pass Hurdle 2 due to lack of inventive step. T1798/13 is a recent Board of Appeal decision showing the application of the COMVIK approach and the assessment of technical character for the claim as a whole.

The EPO recently addressed this gathering importance by updating its guidelines and introducing a new section headed ‘Artificial Intelligence and Machine Learning’. This new section points to some of the problems involved in obtaining patents for AI-related inventions.

According to the new guidelines (G-II, 3.3.1), AI and machine learning (ML) are based on computational models and algorithms for classification, clustering, regression and dimensionality reduction, such as neural networks, genetic algorithms, support vector machines, k-means, kernel regression and discriminant analysis. Such computational models and algorithms are per se of an abstract mathematical nature, irrespective of whether they can be ‘trained’ based on training data.

Although this characterisation of AI and ML seems to suggest a per se exclusion from patentability, this is true only as long as the AI-related inventions are claimed abstractly without any application in a field of technology (ie, without technical character). However, in many cases it is possible to claim a technical application of the abstract AI or ML concept. Examples for such applications include:

Ultimately, AI and ML methods – although they may be based on abstract mathematical solutions – are implemented in software that runs on computers. Therefore, in practice, it will often be possible to claim an AI invention as a computer-implemented method to overcome the hurdle of technical character and exclusion from patentability. However, for passing the second hurdle of inventive step, it may be insufficient to claim the mere implementation of a well-known, underlying mathematical concept by a computer. As with any other CII, applicants should direct their claims to computer-implemented methods for technical application and technical effect. Examples of claims recently granted by the EPO in the area of AI may be found in EP 3 117 274, EP 2 850 467 and EP 3 121 810.

Recommendations for responding to office actions

Although the COMVIK approach is well-established, it suffers from a lack of a legal definition for ‘technicality’. Therefore, breaking down the test for technical character from the level of the claimed subject matter as a whole to the feature level, may well result in a view that is (deliberately or unintentionally) dissociated from the technical context of the invention. In practice, the application of the COMVIK approach by the examining divisions often leads to a rather arbitrary or artificial separation of technical and (supposedly) non-technical features. Moreover, the objective problem solved by the invention is often deliberately formulated as a non-technical problem (eg, relating to business or management schemes), while alternatively a technical problem could be readily formulated.

Patent laws were established before computers existed and it took the EPO more than 20 years of case law development to find a workable and systematic approach to software-related applications. This EPO approach is an improvement, as it shifted the focus in examining software from the rather academic discussion of technical character of a claimed subject matter as a whole and possible exclusion of patentability, to the more practical discussion of inventive step and the technical contribution for solving a technical problem.

Nonetheless, the lack of a legal definition for ‘technicality’ is a major problem and frequent source for discussions, especially when assessing technical or non-technical features. As a result, the separation of technical and non-technical features in mixed-type claims often appears to be rather artificial in view of the overall technical character of the claimed subject matter.

The national legal provisions of the EPC member states are harmonised and generally reflect the exclusion of computer programs. However, national case law can deviate from EPO practice, making it worth considering national filing routes instead or in addition to the European patent filing route, at least for important inventions. In particular, the German patent system, which has always been considered patentee-friendly, seems increasingly reluctant to assume non-technical features in patent claims relating to CIIs. 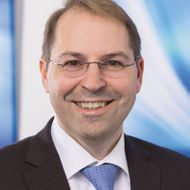 Rainer K Kuhnen is partner with the renowned IP law firm KUHNEN & WACKER. As a German and European patent attorney he specialises in patent prosecution and opposition, as well as nullity and infringement proceedings, especially in the fields of electrical engineering, electronics, physics and software-related inventions. Mr Kuhnen holds a master’s in electrical engineering from the Technical University of Munich and an LLM in European IP law.