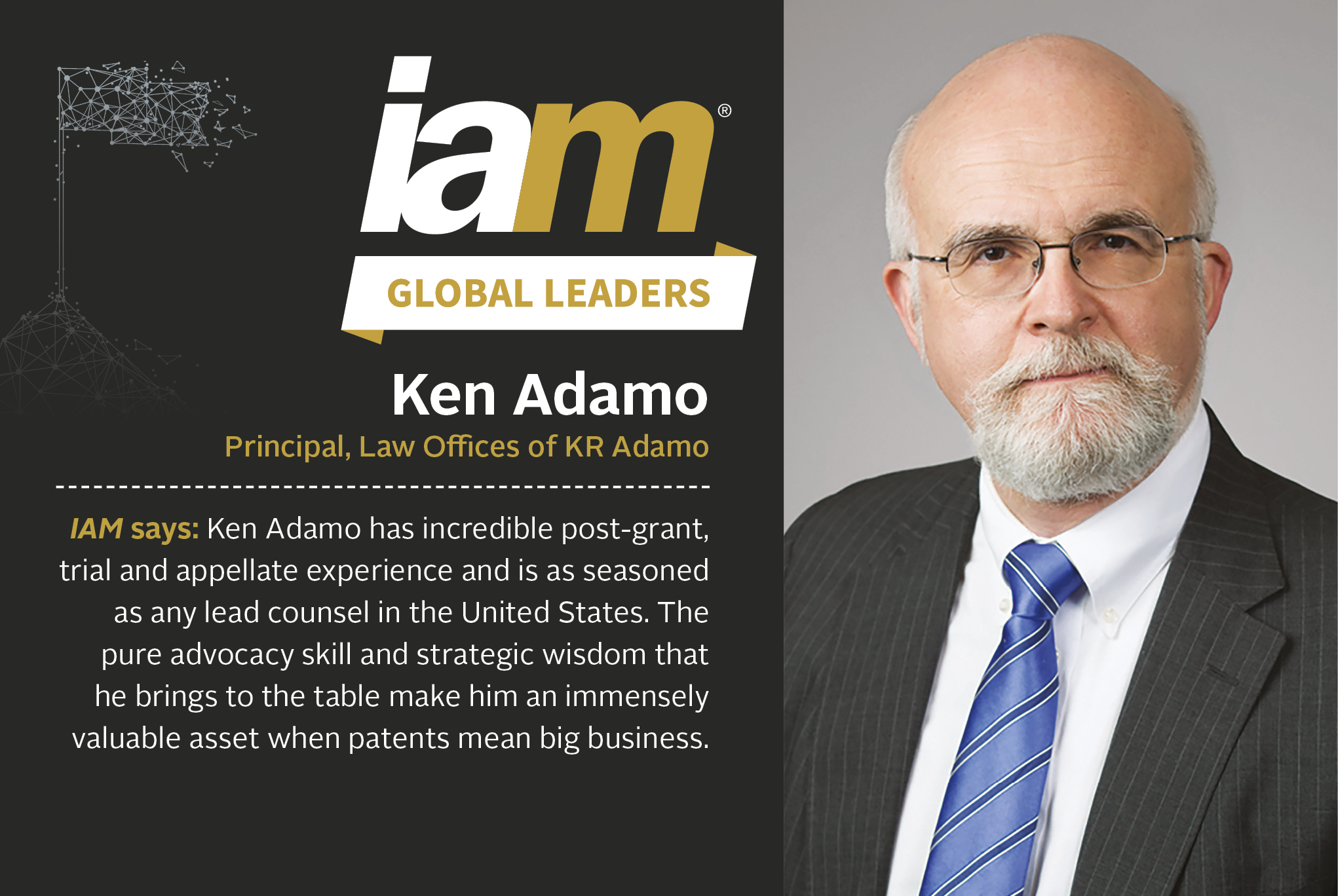 What led you to a career in patent law?

I was in the middle of a five-year master’s in chemical engineering at Rensselaer Polytechnic Institute in 1971-1972, when a friend living in Chicago suggested that I meet her friend who was a patent lawyer specialising in litigation. By coincidence, my law school was working with Rensselaer to construct a multi-year engineering plus law combined degree and reached out to me as a sort of guinea pig, encouraging me to take up studies by offering a full JD scholarship. It was too good a deal to pass up. I then spent a couple of summers working for Eastman Kodak in the firm’s patent department in Rochester, New York, when the instant photography lawsuits were taking place, which sealed the deal for the long term.

You have been recognised as one of the world’s best patent litigators by various publications. What has been the secret to your success?

Work, work, work – I have worked very hard to gain experience and to stay ahead of the curve with regard to changes in the law and trial practice. Being in the right place at the right time did not hurt either, as well as having some luck in working for and with real trial lawyers (not litigators).

How are client demands changing, and what impact has that had on the way that you manage your practice?

It is all about focus and efficiency, true teamwork with in-house counsel and law firm colleagues and open-mindedness about strategy and tactics. ‘Same old, same old’ is no longer acceptable – not that it ever should have been. Knowing how to staff correctly and how to make – and stick to – a budget is also crucial.

What has been your most memorable case to date, and why?

Every case that I have handled in the past 45 years that was – or should have been – disposed of on summary judgment, that was tried to verdict or judgment (jury/bench trial), that was won, reversed or otherwise had a favourable outcome, or that ended up in a loss, and every US Court of Appeals for the Federal Circuit appeal that I have appeared in, win or lose.

From a litigator’s perspective, what are the major differences between bringing a case at the International Trade Commission (ITC) and in district court?

The presence of a jury in district court and the absence of a jury in the US ITC is the major difference. There are a number of other substantive and procedural differences (ie, the district court/appeal structure contrasted to the administrative law judge/commission review/appeal structure, domestic industry, presidential review and difference in remedies available). Who the trier of fact is, however, is paramount to a trial lawyer.

What advice would you offer US patent owners considering alternative dispute resolution (ADR)?

Learn all the existing available ADR methodologies (eg, early neutral evaluation, mediation and non-binding/binding arbitration), the techniques that are being suggested by the commentators but that are not yet in general use, and the techniques that you may develop and use for the first time – and use them when appropriate. Do not feel compelled to use administered ADR proceedings (eg, the International Chamber of Commerce, WIPO and the American Arbitration Association) – remember that you can develop and agree to non-administered, home-built proceedings too. ADR is a creature of contract in the usual instance. An acceptable ADR resolution short of trial is definite and certain; a trial never is.

What are the most common mistakes that parties make in ex parte and post-grant PTAB proceedings?

The most common mistakes are proceeding as if you were trying the case to a jury or a US district court judge, rather than the PTAB, adopting a strategy and/or tactics that are not PTAB-friendly, and not knowing and using Title 5 of the Administrative Procedure Act to full effect.

USPTO Director Andrei Iancu has introduced many changes to PTAB practice. To what extent would you agree with his claim that it is a “new day at the PTAB” and which of those changes have been most impactful?

I am agnostic as to just how new the day really is – or is not. Some of the director’s changes have been excellent; however, his tendency to rely on guidance as a substitute for honouring the Administrative Procedure Act procedure of adopting new or revised rules is problematic as a matter of law and practice, particularly if you want a system that is definite, certain and legally supportable. The Federal Circuit is closely watching the proclivity to use guidance as if it were the law and binding, and it appears not to be accepting end-around attempts. Winning at the PTAB is not the end of the game, it is just round one.

Subject-matter eligibility remains a complex subject in the United States. How likely are we to see legislative reform to Section 101 any time soon?

I have no idea. The US Supreme Court has not yet been presented with a vehicle that has drawn it to try to resolve the severe problems which are theoretically, if not actually, of its own making. Congress has floated numerous trial balloons but has done nothing. The commentators, law professors and retired judges write and write, and then write some more, but no one in authority seems to be listening.

Crystal-ball gazing has never been one of my specialties, and I am not going to engage in it on this subject.

How do you expect the US patent litigation landscape to evolve in the next five years?

Technology will become more complex, while the amounts of money involved in cases will become greater and greater, with damage awards in the billions becoming more common (although not easily sustainable); billions more will be spent to research and develop new patentable inventions (eg, 5G, the Internet of Things and biosimilars). US patent litigation will likely remain, all too often, the technique of choice – if not of necessity – to resolve inevitable conflicts. US litigation will continue to be a complex, uncertain and hyper-expensive business tool unless and until the various relevant business communities get serious about ADR solutions or the mixed use of such solutions with litigation.

Ken Adamo is the owner of the Law Office of KR Adamo. He has extensive trial experience as lead counsel in jury and non-jury cases before US state and federal courts and before the US International Trade Commission, as well as ex parte and post-grant PTAB experience in the USPTO. Mr Adamo has substantial experience as lead counsel in arbitrations and other alternative dispute resolution proceedings, and actively practises before the US Court of Appeals for the Federal Circuit.