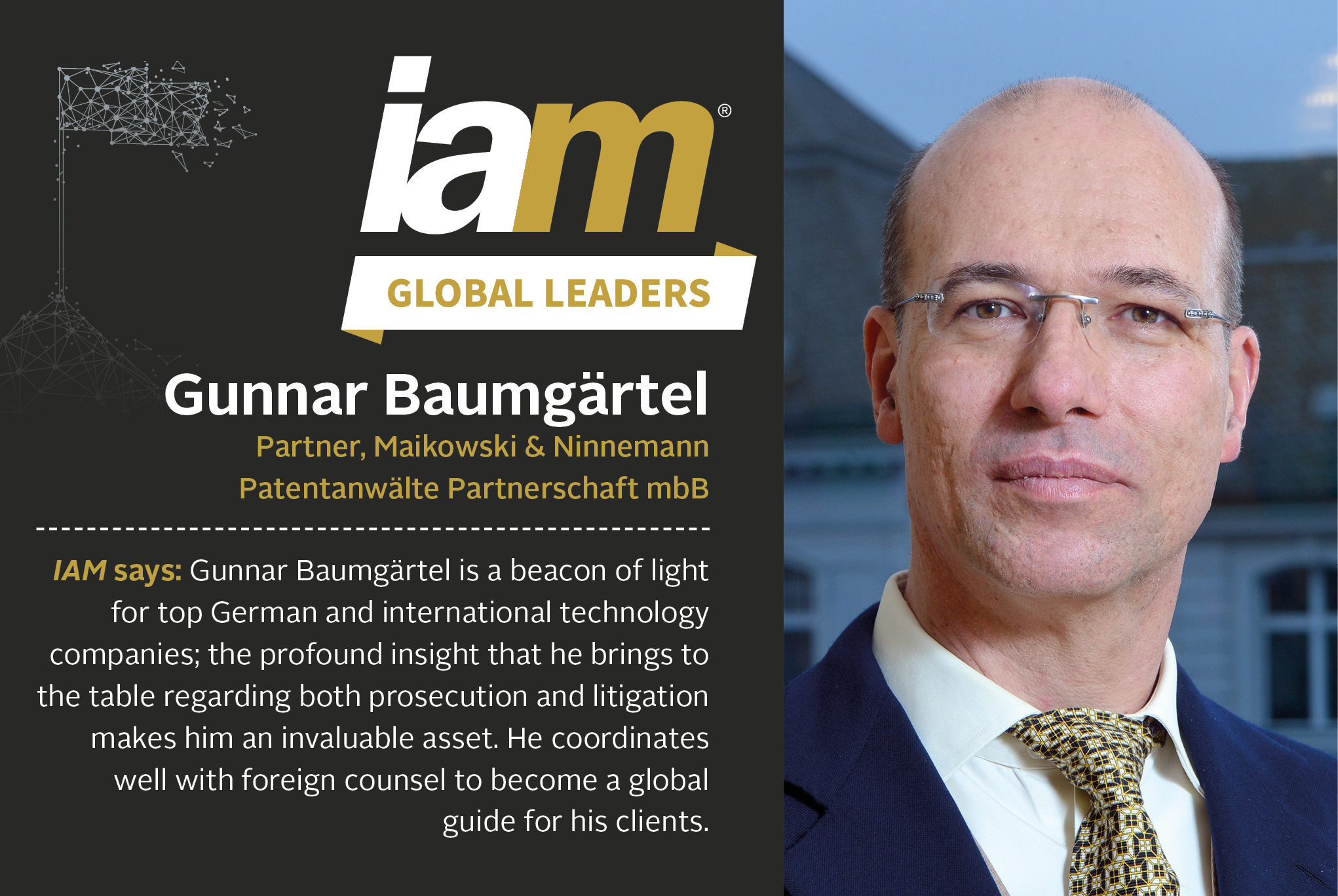 You have a wealth of experience representing clients in nullity cases before the Federal Patent Court. What is the key to success in this arena?

Nullity cases pending before the Federal Patent Court are typically decided after a whole-day hearing by a board consisting of two legally qualified judges and three technically qualified judges. The hearing is of utmost importance as the outcome may be strongly affected even by pleadings late in the afternoon of the hearing date. To succeed in this arena, outstanding oral advocacy skills are priceless. It is also essential that the written submissions lay the foundation for a successful outcome and are tailored not only with respect to the characteristics of the case in general but also to create opportunities during the hearing.

What are some of the biggest challenges facing clients in the fields of electronical and mechanical engineering?

When it comes to innovations in electronical and mechanical technology, the biggest challenge appears to be the increasingly close connection between classical engineering on the one hand and software/data science on the other. While it is typically straightforward to obtain patent protection for a specific, novel combination of classical engineering technology and software, it frequently proves challenging to obtain protection for the underlying principles of the relevant software or data processing as such. However, it is vital to strive for the latter in order to secure a sustainable competitive advantage in those technologies where progress is exceptionally rapid and competition is fierce.

Which emerging technologies are having the biggest effect on the IP transactional space?

The effect on the IP transactional space will be particularly noticeable for emerging technologies such as AI, blockchain, fintech, robotics, life sciences and healthcare, where there is a considerable demand among well-established companies for access to technology and IP rights developed in smaller businesses, including start-ups.

Having been appointed as an arbitrator in various international proceedings, what advice would you offer German patent owners considering alternative dispute resolution?

Parties need not refer a whole patent dispute to arbitration but may select those issues for which they do not achieve a solution during negotiations. This may also be helpful in cases where the parties have already engaged in court proceedings (eg, by enforcing various patents against each other) and cannot agree on the terms of a settlement. Here, the parties may conclude a partial settlement, covering those issues on which they can agree and referring the remaining issues to arbitration.

How do you expect the German patent litigation landscape to develop in the next five years?

Patent litigation will remain highly active in Germany due to the competence and efficiency of the infringement courts – especially as it is not yet clear if and when the UPC will become operational.

There is also a chance that the so-called ‘injunction gap’ in Germany’s bifurcated patent litigation system resulting from the efficiency of the proceedings before the infringement courts (which typically take a first-instance decision on infringement even before the Federal Patent Court has issued at least a preliminary opinion on the validity of the patent in suit during the parallel nullity proceedings) will become less prominent. As the number of appeal cases pending before the Federal Patent Court is continuously falling, the court should be able to allocate more resources to the nullity boards.

Moreover, a number of controversies regarding the application of competition law in patent infringement cases – in particular, when it comes to the enforcement of SEPs and the right to a licence based on FRAND conditions – are likely to be taken up by the appeal courts and the Federal Court of Justice. Recently, the Federal Cartel Office issued an opinion in connected car cases suggesting that the first-instance courts dealing with those patent disputes should bring certain matters relating to the FRAND rules before the European Court of Justice, seeking to clarify, among other things, whether it constitutes an abuse of a dominant position if an SEP holder refuses to grant a licence to a supplier and sues the manufacturer of the end product for patent infringement, and whether an SEP holder is free to choose which company in a supply chain to sue for patent infringement.

Gunnar Baumgärtel studied physics in Berlin and Paris, obtaining a doctoral degree in computeroriented solid state physics. He trained as a German and European patent attorney from 1994 to 1998 and holds an LLM in European IP law. He is continuously involved in a significant number of high-profile patent litigation cases, mostly in the fields of telecommunications, automotive, electronics and software. Alongside that, he concentrates on patent prosecution work and licensing.