Predictions that US 10,000,000 will be issued on 19th June 2018 were proved correct last Monday when the United States Patent and Trademark Office released a short video announcing the much anticipated event. The agency’s Director, Andrei Iancu, also named the day during his keynote address on Monday at IPBC Global in San Francisco. In this month’s piece from Clarivate Analytics, Bob Stembridge – the company’s marketing communications manager – looks at previous USPTO milestone patents and explores the impact they have had.

The specific US patent that will become number 10 million has not yet been identified, leading to much speculation in the industry about potential candidates. In anticipation of the announcement, our experts at Clarivate have identified and assessed the impact of all USPTO milestone patents, starting with the one millionth.  Certainly, the economic impact of US patents in general has been profound – according to a 2012 joint study by the Economics and Statistics Administration and the USPTO entitled “Intellectual Property and the US Economy: Industries in Focus”, intellectual property intensive industries support at least 40 million jobs in the United States and contribute more than $5 trillion dollars to U.S. gross domestic product (GDP).

The accelerating pace of innovation 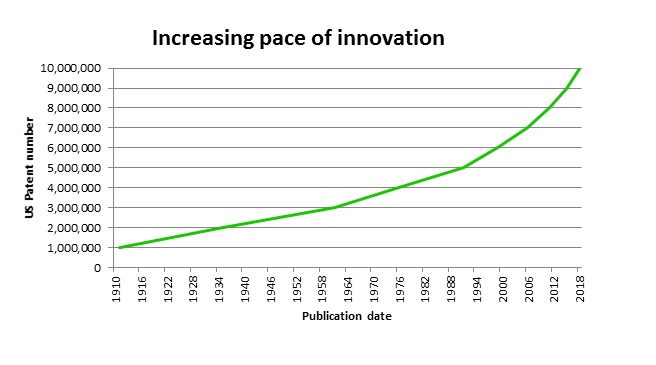 The first millionth patent describes an improvement on the common vehicle tyre. Most people at this time were captivated by the new air-filled tyres making solid rubber tyres almost obsolete. These tyres provided more cushion on the uneven dirt roads that dominated most of the cities, but the downside was the higher risk of puncture causing most Americans to replace their tyres far too frequently. While asphalt and smoothly paved roads were starting to become commonplace, most Americans still needed an alternative, more durable tyre. The one millionth patent laid the foundation for the solid pneumatic tyre, where V-shaped yieldable and flexible strips fill the space inside the outer tyre casing. The encased resilient strips provide a level of comfort while eliminating the problem of punctures. The solid pneumatic tyre is still used today, mainly for construction vehicles such as forklifts and cranes.

This claims a train wheel having a pneumatic tyre that can be bolted to the metal wheel rim preventing slippage between the tyre and rim under high speed conditions. Rubber and pneumatic tyre railway vehicles have been implemented in several countries worldwide and are still being developed today, especially for Metro systems and monorails. Pneumatic tyre rail vehicles have the advantage of a quiet and more comfortable ride, and an ability to accelerate and brake faster, enabling trains to be marshalled more closely together.

US 3,000,000 was a pioneering invention in the technology of optical character recognition (OCR). Assigned to General Electric, this patent laid the groundwork for a revolution in turning the printed word into digital form with all the benefits we see today. The most common use of this technology is in scanners and scanning applications on smartphones that allow us to take printed documents and convert them into text which we can then share and edit in seconds. Without OCR, much of the historical content on the world-wide web today would not be searchable.

US 4,000,000 is a typical example of what made America great. An individual entrepreneur, Robert Mendenhall, had faith in his product, invested to protect his invention and built a company that then exported the technology to the world. His patent was for the process and equipment to recycle asphalt pavements without causing atmospheric pollution. His work led to America’s first recycled freeway in 1975, using 100% recycled asphalt for construction. This innovation was the basis for Mendenhall’s next major product, the single port direct-fired method of recycling 100% asphalt aggregate compositions. This led to the production and sales of the mini cycle plant, which helped solve the US national pothole problem. This self-contained, award-winning invention is now used worldwide to fix potholes.

This patent was hailed as a landmark advance and describes a new genetically engineered microbe that converts biomass (wastepaper, household rubbish) into ethanol fuel. Before this innovation, the main way to produce ethanol, a substitute for gasoline, was by fermenting corn and sugar cane, which remains comparatively expensive to oil-based fuels. The engineered microbe, formed by transferring two enzyme genes from one bacteria into a new type of bacteria, allows the production of ethanol from virtually all kinds of sugars, including anything produced by plants such as grass clippings, wheat stalks, cardboard, grocery bags and even newsprint. This green technology was a highly topical invention for its time and has the capability to shrink the volume of plant and paper waste by about 80%.

US 6,000,000 was issued to 3Com. It was one of the world’s most admired companies in 2004, according to Forbes, and was acquired by HP in 2010. The impact of the 3Com technology described in the patent lives on, however, as the foundation of any computer application that requires synchronisation between two devices simultaneously. For example, this innovation allows us to access our email on our smartphone on the way to the office and ensure our inbox is synchronised when we fire up the same application on our laptop when we arrive at work.   The technology has evolved greatly since 1999 and is the basis for the Cloud and other forms of file sharing, sync, and backup.

This patent helped project us into the future of sustainable fashion and fabrics. Assigned to DuPont, this innovation describes a strong and biodegradable fibre, with all the desirable properties of cotton, but without the cost of production and issues of degradation. This renewable fiber is the basis for DuPont’s Sorona®, which reduces the use of fossil fuels and green house footprint. The fibre is being used by clothing brands such as The North Face, Dickies and Liverpool Jeans, and was also used for Canada’s snowboarding team uniforms for the 2018 Winter Olympics. Other uses for the fibre include stain resistant carpets as well as colourful traditional Indian clothing, saris, which rival the luxurious feel of silk.

US 8,000,000 is a medical device, developed by Second Sight, which provides a kind of external artificial retina to restore sight to patients blinded by retinal degeneration. The world’s first retinal prothesis to gain European market approval in 2011 works by converting video images captured from a miniature camera, housed in the patient’s glasses, into a series of small electrical pulses that are transmitted wirelessly to an array of electrodes on the surface of the retina. These pulses are intended to stimulate the retina’s remaining cells resulting in the corresponding perception of patterns of light in the brain. This invention is another example of an inspired individual, Robert Greenberg, taking an idea, protecting it, founding a company and then marketing the idea to the world. The innovative technology developed by Greenberg was most notably picked up by Google with its development of Google Glass.

The nine millionth US patent, issued to WiperFill Holdings LLC, describes a funnel assembly that collects rainwater, dew or melting snow and ice on a car’s windshield and automatically replenishes the vehicle's windshield washer reservoir. The product filters the water through a replaceable cartridge and then mixes the water with the correct amount of washing or de-icing concentrate. This innovation ensures that you never run out of windshield washer fluid at a crucial time, especially during winter months. This green technology has been picked up by several others including Ford.

And so what of US 10,000,000?  Speculation is rife, but we’ll have to wait until 19th June 2018 to see the latest innovation in this fascinating continuing series of milestone patents from the US.

Clarivate Analytics will be running a series of videos leading up to this historic event, which kicked off with Dan Videtto, President of IP and Standards on Monday 11th June.  Further installments can be followed at #10millionpatents and #Derwent10M, and the series will culminate with a review of US 10,000,000 when it issues next Tuesday. 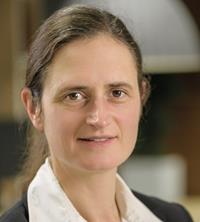