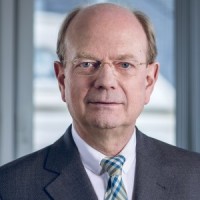 Wolf Graf von Schwerin has covered a wide range of IP issues throughout his career. In the more than 25 years that he has been practising law, he has worked on a remarkable variety of cases in patent and utility model, trademark, design and unfair competition and copyright law – particularly in forensic issues. He has also been frequently involved in published decisions, including some of fundamental significance.

Mr Graf von Schwerin’s experience in technical property rights extends to practically all fields, including biochemistry, pharmaceuticals, medical technologies and data communication. He specialises in cross-border litigation and proceedings on SEPs. He has also been a lecturer at the University of Dusseldorf for many years.

Mr Graf von Schwerin has been described by Chambers Global as “an esteemed litigator” (2011), “an exceptional litigator and a real standard name in the market” (2012) and “widely regarded as a leading litigator” (2014). JUVE German Commercial Law Firms (2011 to 2018/2019) included him in its list of frequently recommended attorneys and described him as “extremely effective” (2013) and “very experienced” (2018). The Legal 500 (2009) stated that “Wildanger Kehrwald Graf von Schwerin & Partner mbB is well known among clients thanks to the ‘very qualified and knowledgeable’ Mr Graf von Schwerin, who is known as a ‘tough fighter and competitor’”.