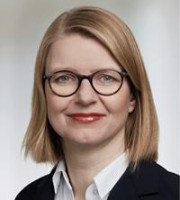 Ulrike Ciesla is a member of Meyerlustenberger Lachenal’s IP team, which ranks among the leaders in intellectual property in Switzerland. In particular, she complements the patent litigation team with her expertise in technical matters and patent law.

Before joining Meyerlustenberger Lachenal as partner, Ms Ciesla was already working with the firm’s IP team on the Faslodex litigation proceedings.