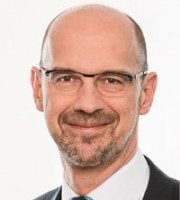 Thomas Knapp has been a partner at DREISS Patentanwälte since 2000. He is a European and German patent and trademark attorney and holds a diploma in aerospace engineering from the University of Stuttgart, Germany, as well as a doctoral degree from ISAE/SupAéro in Toulouse, France.

Mr Knapp started his career as a development manager in a small aircraft development company and later in a large aerospace test company. He became a patent attorney in 1999.

His areas of technical expertise include automotive, civil engineering, medical technology, surgery instruments, packaging, hydraulics, aerospace engineering, molding, thermal protection, house climate control, wood machining, handheld machine tools, weapons and weapon simulation, satellite navigation, radar detection, textile – all of these both in the mechanical field and in the field of control and sensor technics. He can advise not only on patents, but also on trademarks and design patents. His clients range from small and medium-sized regional companies up to large multinational companies.

To date, Mr Knapp has drafted and prosecuted over 1,000 patent applications. He has many years of experience in nullity and infringement cases before the German Federal Patent Court, the German regional courts, the German higher regional courts and the German Federal Court of Justice; he also provides second opinions in such cases. He is a member of the multinational nullity and litigation teams, and frequently represents clients in opposition and appeal proceedings before the German Patent and Trademark Office and the European Patent Office.

Mr Knapp lived in France for several years and is therefore fluent in French, as well as in English. He has held a private pilot licence and instrument rating for over 40 years. He is the author of the section relating to the use of intellectual property as loan security in the German finance textbook FCH-Sicherheitskompendium.