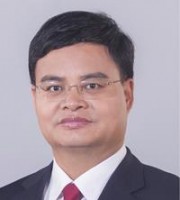 Qinghui (Nick) Liu has over 15 years significant domestic and overseas work experience in the field of intellectual property in China. He concentrates his practice on patent prosecution, patent licensing, patent litigation, trademarks, copyrights, trade secrets, the full range of IP transactions as well as arbitration and antitrust. Dr Liu has clients in a variety of high-tech industries and Fortune 500 companies, such as Qualcomm and AstraZeneca.

At AnJie Law Firm, Dr Liu has handled numerous high-profile patent and other IP litigation cases, such as Qualcomm v Apple and AstraZeneca v Patent Re-examination Board. His IP team represented AstraZeneca in the patent administrative litigation and successfully persuaded the court of second instance to reverse the first-instance decision. This was a milestone case for chemical compound-related inventions and was rated as one of the “50 Typical Intellectual Property Cases in The Year 2018”.

Dr Liu published three IP-related academic monographs, Guideline for Patent Infringement Litigation in China, Application of the Law on Invention/Utility Model Administrative Lawsuits – Rules and Cases and Liability of Internet Service Providers on Indirect Intellectual Property Infringement from 2017 to 2019. These books received wide acclaim among attorneys in China and were regarded as guidelines for resolving various IP-related issues. In addition, Dr Liu also published many influential IP-related articles and essays in some well-known journals and magazines.

Dr Liu is often invited as a guest of honour by many major Intellectual Property conferences and convention, where he delivered some keynote speeches such as patent administrative litigation practices and issues, the rules for determining patent infringement and explaining patent claims, etc.