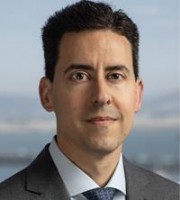 Peter C Magic is the managing partner of Desmarais LLP’s California office. After graduating from Michigan Law in 2008, Mr Magic began his career in the patent litigation department of Kirkland & Ellis LLP in New York City. From 2009 to 2010, Mr Magic served as a law clerk to the Honourable James Ware, district court judge in the US District Court for the Northern District of California, San Jose Division, and afterward rejoined Kirkland. In 2014 Mr Magic joined IP trial boutique Desmarais LLP and moved in 2018 to San Francisco to open the firm’s first office outside of New York City.

Mr Magic represents plaintiffs and defendants in patent litigation in a variety of industries. In representing defendants, he has helped clients secure judgments of non-infringement, invalidity and low damages. In representing plaintiffs, he has helped clients achieve substantial settlements, as well as an exclusion order at the International Trade Commission.

Mr Magic is a member of the Bars of California, New York, the US Supreme Court, the Court of Appeals for the Federal Circuit and numerous district courts. He is admitted to practise before the USPTO.