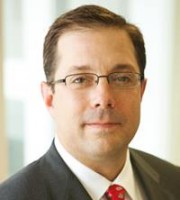 Paul J Skiermont is a trial lawyer with a national litigation and inter partes review practice. He represents small and large companies in litigation involving complex science and technology, including pharmaceuticals and other life sciences, natural language processing, telecommunications, aerospace and consumer electronics.

Mr Skiermont was lead trial counsel for the patent owner in a recent successful jury trial in East Texas – in which the verdict included a finding of wilful infringement. He also represented the patent owner and exclusive licensee in a patent infringement lawsuit accusing Apple’s Siri personal assistant of infringing a natural language processing patent owned by Rensselaer Polytechnic Institute. The case was settled on the eve of trial with Apple paying $25 million for a non-exclusive licence.

Skiermont Derby LLP was recognised by online legal news service Law360 as one of 10 national boutique practices “that have established brands on par with the biggest firms” and are “capable of competing with – and beating – the best big firms at the highest level”. The firm offers a variety of alternative fee agreements to clients based on the value of its work, as an alternative to the number of hours it spends working on a case.

Before co-founding his own firm, Mr Skiermont was a partner at BartlitBeck LLP, a nationally renowned litigation boutique known for its success in high-stakes cases.

Mr Skiermont obtained his bachelor’s degree, with honours, from the University of Kentucky. While an undergraduate, he was twice awarded First Place Speaker at the Intercollegiate National Debate Tournament – one of only three people to win the award twice since the tournament began in 1947. Before law school, Mr Skiermont coached the undergraduate debate team at Harvard University. He earned his law degree from the University of Chicago with high honours, Order of the Coif. After law school, he was a judicial clerk for Judge C Arlen Beam at the US Court of Appeals for the Eighth Circuit.