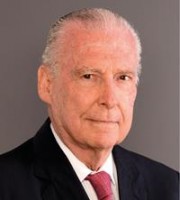 Luiz Leonardos, founder of Luiz Leonardos & Advogados, has helped shape Brazil’s modern IP legal landscape. He has distinguished himself in the IP arena and was part of the Brazilian delegation to the Stockholm Conference of the Paris and Berne Conventions, where the World Intellectual Property Organisation was created.

Mr Leonardos’s distinguished career in IP law is widely recognised among Brazilian and foreign specialists and publications. He is the author of several articles and has lectured extensively over the years.

Mr Leonardos provides clients at national and international level engaged in multiple industries with strategic advice on IP complex issues, including litigation. Legal excellence and solid ethical conduct are the main components guiding his practice and made him one of the most respected IP practitioners of his generation.

He specialises in licensing and litigation.