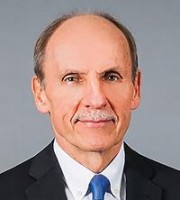 Of Counsel at Smart & Biggar

Gunars Gaikis has over 30 years of experience in IP law and is highly skilled in the procurement, litigation and enforcement of pharmaceutical and biotechnology patent rights. Mr Gaikis was counsel in the earliest cases commenced under the Patented Medicines (Notice of Compliance) Regulations in 1993 and over the past 20-plus years he has continued to represent innovators in numerous precedent-setting decisions, shaping the law through his trial and appellate work in pharmaceutical patent litigation. His work includes the protection of IP assets relating to esomeprazole, omeprazole, ramipril, lisinopril, trastuzumab, ciprofloxacin, ranitidine, naproxen and doxorubicin. He was lead counsel on the Smart & Biggar team that successfully represented AstraZeneca in a landmark pharmaceutical patent case in which the Supreme Court of Canada struck down the utility ‘promise doctrine’ and upheld AstraZeneca’s NEXIUM patent as useful.

Mr Gaikis has been described by independent reviewers as “one of the best patent litigators since the industry began”. He is recognised as one of the world’s foremost experts on IP law by Who’s Who Legal: Thought Leaders 2019; he was named Best Lawyers’ Toronto Biotechnology Law Lawyer of the Year in 2017 and he is recognised as amongst the top 30 patent attorneys in the world by Expert Guides: Best of the Best. He is also listed in the Lexpert Guide to the Leading US/Canadian Cross-Border Litigation Lawyers in Canada, The Canadian Legal Lexpert Directory, Chambers Global, The Best Lawyers in Canada, Benchmark Canada, LMG Life Sciences, Expert Guides: Guide to the World’s Leading Patent Law Practitioners, Who’s Who Legal: Life Sciences and Patents, MIP’s IP Stars Handbook: Patents and the IAM Patent 1000.

Mr Gaikis completed a residency programme in clinical pharmacy and was previously a licensed pharmacist.