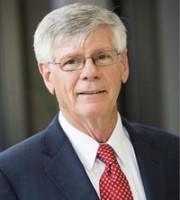 Considered one of North Texas’s most experienced IP veterans, Mr Howison was the founding partner of Howison & Arnott LLP, which he established in 1999 with a primary focus on intellectual property. In 2017 Mr Howison and his team joined MWM, combining two strong IP practices.

Mr Howison frequently travels and serves as a consultant to companies (both patentees and licensees) involved in patent licensing negotiations in the United States, Japan and China. He has served as lead counsel on numerous inter partes reviews before the PTAB for both patent owners and petitioners.

Mr Howison is one of MWM’s leading patent prosecutors with established global and regional clients. He has helped the firm sign a significant Japanese electronic parts manufacturer based in Kyoto with a US location in Silicon Valley. Mr Howison also represents firm clients in the telecommunications and semiconductor industries.

Mr Howison is honoured as a Texas Super Lawyer by Thomson Reuters in intellectual property and he is rated AV Preeminent by Martindale-Hubbell. He received his bachelor’s in electrical engineering from the Catholic University of America and his JD from the Southern Methodist University School of Law.