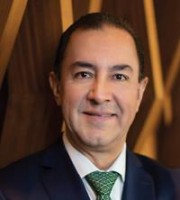 Fernando Becerril is a mechanical and electrical engineer who specialises in electronics and digital systems. He graduated from the Universidad Nacional Autónoma de México. He joined Becerril, Coca & Becerril in 1990 and became director of IP management in 2000. In May 2010 he was invited to become a partner and is currently senior partner.

His patent practice focuses on telecommunications, business methods and software; in addition, he is deeply involved in the business development of the firm and responsible for the institutional relations with national and international authorities and associations.

He has received numerous accolades, including being named a Patent IP Star (2014-2018) and a Trademark IP Star (2017) by Managing Intellectual Property.

Mr Becerril frequently participates as a speaker and moderator in IP forums in Mexico and abroad. He has published several articles relating to domain names, business methods and software patents on several media platforms. He also regularly contributes to well-known publications such as Entrepreneur and Mexican magazine Alto Nivel.