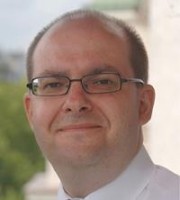 Felix Gross is a chemical engineer by training and a German and European patent attorney. He specialises in mechanical and process engineering as well as in telecommunication and software patents. Dr Gross is regularly involved in major series of patent disputes related to telecommunication and software-related patents, including infringement procedures before the district and appeal courts, and nullity procedures before the Federal Patent Court. In addition, he has vast experience in patent prosecution, including the drafting of German and European patent applications, and the handling and coordination of procedures throughout the world.

He studied mechanical engineering and process engineering at RWTH Aachen and Imperial College London. He obtained his doctoral degree at ETH Zürich in the field of computer simulation of chemical processes (1991-95). He also holds an LLM in European IP law (2014). He has been a partner at the firm since 2000.

Dr Gross has been lecturing at the Technische Universität Berlin since 2002 and was appointed as honorary professor for patent law in 2009. Since 2012 Dr Gross has also been a regular lecturer in patent law at ETH Zürich.