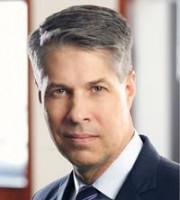 David R Marriott is a partner in Cravath, Swaine & Moore LLP’s litigation department. Mr Marriott has tried, argued and litigated IP and other complex commercial matters in both state and federal courts across the country. Mr Marriott has represented a number of major pharmaceutical and technology companies, including Mylan, IBM, Novartis, Alcon Laboratories, Qualcomm, Bristol-Myers Squibb, Eli Lilly and AT&T.

Mr Marriott recently represented Qualcomm in two patent infringement actions against Apple before the US International Trade Commission seeking to bar iPhones containing non-Qualcomm wireless modem chips from entering the country. Both cases were ultimately resolved by a global settlement between the companies.

Mr Marriott has also represented Merck Sharp & Dohme as plaintiff in three separate patent infringement actions seeking to enjoin the marketing and sale of generic versions of Merck’s antifungal agent, Noxafil, and Juno Therapeutics in a lawsuit filed by City of Hope (“COH”) alleging Juno violated an exclusive licence agreement to certain COH patents. He also represented Mylan in a patent infringement suit over Teva Pharmaceuticals’ development of a generic form of Mylan’s respiratory drug Perforomist. Following a seven-day bench trial, the court upheld the validity of Mylan’s patents and enjoined Teva from marketing a generic version of the drug until Mylan’s patents expire. The decision was affirmed on appeal.

Mr Marriott is a fellow of the American College of Trial Lawyers, an adjunct professor at New York University School of Law and a lecturer in law at Columbia University School of Law. He has been recognised as a leading lawyer by numerous professional publications, including Benchmark Litigation, The Legal 500 US and Lawdragon.

Mr Marriott received a JD from the New York University School of Law in 1994 and a BA from Brigham Young University in 1991.