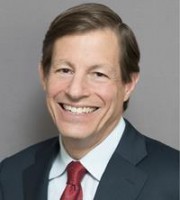 Bruce R Genderson founded and is the senior trial lawyer of Williams & Connolly’s patent litigation practice. He is nationally known for his work representing major corporations in patent disputes. Over the course of his more-than-three-decade career, he has represented some of the world’s largest companies in patent infringement suits involving billion-dollar-a-year pharmaceuticals, complex biotechnology inventions, computers and electronics and medical devices. He has represented a number of emerging companies in patent litigation in different industries as well.

Mr Genderson has been named an “IP Star” by Managing Intellectual Property every year since 2013. The 2015 edition stated that he “has been described by peers as a ‘superb trial lawyer’ and a ‘brilliant strategist’”. LMG Life Sciences 2012 states that “peers consider [him] to be ‘one of the best patent litigators in the country’” and the publication recognised him as a “Life Science Star” from 2012 to 2020. In 2015 LMG inducted him into its Hall of Fame and in 2019 Mr Genderson was awarded “Branded Hatch-Waxman Litigator of the Year”. Mr Genderson also received top rankings in IP litigation in the 2013 to 2019 editions of Chambers USA: America’s Leading Lawyers for Business and was recommended in the 2015 edition of The Legal 500 in the area of commercial litigation. Since 2016, Benchmark Litigation has named him a “Local Litigation Star” in the category of IP litigation. In 2020 Benchmark also shortlisted Mr Genderson with five others for Intellectual Property Attorney of the Year and recognised him as a “National Practice Area Star”.

Mr Genderson began building Williams & Connolly’s patent litigation practice in the mid-1990s, and it is now among the firm’s largest practice groups. He has practised in state and federal courts across the country. He has also assisted in litigation outside the United States, including a trial in Australia. His pharmaceutical clients include Bayer, Eli Lilly, Merck, Novartis and Alcon, and his electronics clients include Samsung and Google.