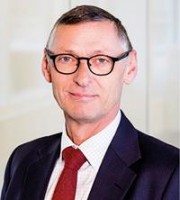 Andrew Hammond is a founding partner of Valea. He has an honours degree in mechanical engineering from the University of Liverpool. Mr Hammond’s IP career began in 1983 when he joined the EPO in Rijswijk, the Netherlands as a search examiner. In 1986 he transferred to the EPO’s Munich office, where he worked as a substantive examiner in examination and opposition proceedings. He left the EPO in 1990 to enter private practice in Sweden and qualified as a European patent attorney in 1993.

Mr Hammond joined his present firm as managing director in 1998. His practice is primarily focused on contentious post-grant patent proceedings and he is engaged by numerous domestic and foreign clients to represent them in opposition and appeal proceedings before the EPO, where he enjoys an enviable track record. He is also experienced in national and international patent litigation. Mr Hammond’s clients are spread across many technical fields, including vehicle technology, medical devices, hygiene products, flooring, printing and mining.

Mr Hammond is a tutor at the Centre for International Intellectual Property Studies and regularly gives lectures and seminars on all aspects of European patent procedures. He ran a two-year training programme for Finnish patent attorneys before Finland’s accession to the European Patent Convention in the 1990s, and a similar course for Norwegian attorneys in 2007.